tl;dr: Poignant firsthand personal accounts of the impact of the Great Depression...

One of the great things about living in Chicagoland is the richness of the city’s literature, both in terms of authors who hail from Chicago: Saul Bellow, Carl Sandburg, Studs Terkel, Mike Royko to name just a few; and books set in Chicago: Upton Sinclair’s The Jungle, or more recently, Erik Larson’s chilling account of a serial murderer during the Columbian Exposition, The Devil in the White City. I had heard about Hard Times, Studs Terkel’s classic chronicle of the impact of the Great Depression, as a teenager, but finally got around to reading it just now. 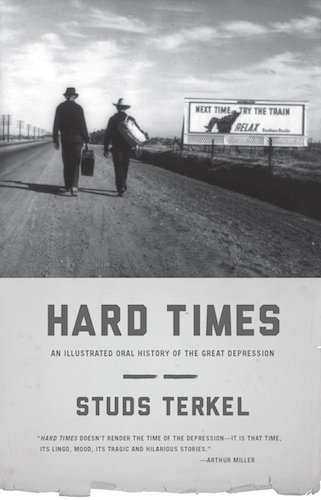 Hard Times is a book about America, not just Chicago, during the Great Depression, as experienced and recounted later by people who lived through it, from all walks of life and all economic strata. Studs Terkel functioned as interviewer and editor; most of the words in the book are those spoken by the people that Terkel interviewed, with minimal introductory and explanatory text from Terkel. Terkel, who had his own strong political views, did a commendable job in Hard Times of seeking out a wide variety of people (some political leaders and captains of industry, but many more working class and poor people) and letting them speak their minds. The interviews are organized into chapters based on similar themes or groups of people, but can be read in any order; Hard Times would be a perfect bathroom book to read five minutes at a time over the course of years.

Hard Times focuses on the effects of the Great Depression on people, not on the causes. Terkel’s love of humanity and his respect for every individual in society, especially the disadvantaged, comes through loud and clear. The pictures in the volume that I read (a trade paperback published by The New Press), especially the ironic cover photo, also strongly convey what people were experiencing. Historical events, such as different programs in Roosevelt’s New Deal as well as labor actions and strikes, are referenced in terms of how they affected individuals, or what those individuals thought of them. There are a wide variety of opinions on Roosevelt himself, including a lot of criticism, even from his initial supporters. In fact, if there is a widely-held consensus about anything in Hard Times, it is that the United States did not fully recover from the Great Depression until production ramped up during World War II.

Reading Hard Times eighty years after the time period it covers, I was struck by how many of the situations described still exist, and how the political battles being fought are still the same ones, at the high level (I had the same impression, years ago, reading Ayn Rand’s Atlas Shrugged). We’ve just come through the Great Recession and a brutal presidential campaign, and there are both winners and losers from the ongoing changes to the United States economy. The names and particulars are different, but the battles being fought are still the sames ones from the 1930s and perhaps time immemorial: how and to what extent should the government manage the economy, and what should the government, business, and wealthy individuals do to help out the less fortunate.

As the people of the Great Depression die off, my grandparents among them (I do remember talking with them about those years), Hard Times preserves the memories and experiences of that difficult time which greatly affected nearly everyone who lived through it (Terkel does interview a few people who claim to have merrily skated through the Great Depression and/or who profited from it). When a factory shuts down or when the economy is restructured, whether by free market forces or by government command or by some combination thereof, there are real impacts on people. All too often those impacts are minimized or brushed aside by those in power who are leading the transformation. Hard Times serves as a reminder to consider the impact upon everyone. It’s deservedly a classic of the times