Even today, more than thirty years after it was written, William Gibson’s Neuromancer retains its power to blow the mind of the reader into a thousand pieces, replace each of those pieces with something darker, shinier, and futuristic, and reassemble those pieces into an entirely self-consistent whole that yields new truths about both today’s world and tomorrow’s. 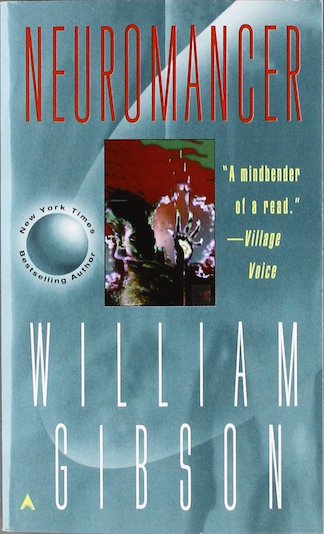 Yes Neuromancer is a work of science fiction, but it transcends the genre and should be read by all who appreciate fine literature. Gibson’s writing style in Neuromancer is almost more poetry than prose. Long descriptive passages detailing the action are non-existent; instead, Gibson presents series of images with carefully chosen adjectives and dialect. It is up to the reader put this series of still frames into narrative motion. This forces the reader to think far more deeply than is typical in pulp science fiction. The reward, besides the stark beauty of the images themselves, is insight into Gibson’s thoughts about the human condition.

Focusing purely on the technology in Neuromancer from today’s perspective, thirty years into the future from when Gibson wrote Neuromancer, it is remarkable how much he got right. Artificial intelligence, man/machine interfaces, wearables, biomedicine, computer simulation, hacking, virtual reality, the Internet, and space travel have all advanced along the lines inferred by Gibson. Yet we still have at least another thirty to fifty years to go to get to the stage described in Neuromancer. If Gibson is ultimately right about the technology, there will be plenty of jobs for software engineers and surgeons in the decades ahead.

But the technology in Neuromancer, although interesting, is merely the setting for Gibson’s story about what we and our creations are like and will be like. Here the vision is fairly bleak on the surface but perhaps optimistic underneath. Similar to today’s world, in Gibson’s future there are the “haves” with unimaginable wealth and the “have nots”, some of whom survive by street hustling. Issues of wealth, power, trust, interpersonal relationships and love continue to be the main drivers of behavior. In that sense there is much in Neuromancer that Shakespeare would recognize. The ending of Neuromancer is purposely vague, leaving it up to the reader to decide whether what has been achieved by the protagonists is ultimately evil or good. I choose to believe it is the latter.

Neuromancer is well worth reading today and will be for decades to come.