tl;dr: Beloved by many, for good reason...

Ender's Game (EG) has a storyline, characters, settings and action that create obvious appeal for the junior high or high school reader. Yet unlike so much "young adult" fiction, it has enough depth and meaning to thoroughly satisfy the parents of those teenagers. It deservedly won the Hugo and Nebula Awards, and has just now been made into a Hollywood sci-fi movie with big budget special effects. I am writing this review right before the movie comes out, and given how good the book is, and the fact that the book is almost always better than the movie, I feel very confident in saying that if you liked the movie, you will love the book. And if Hollywood falls short in their necessarily abridged interpretation of the book, then you really should read EG. 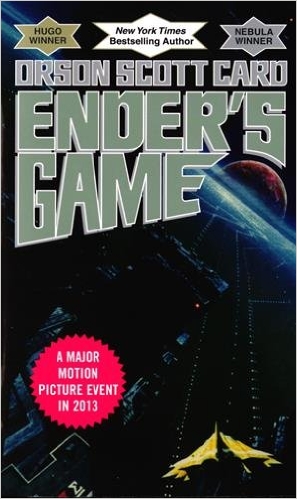 The plot of EG is straightforward: a gifted young boy from a unique family is chosen by the powers that be to go off to military training school, along with similarly selected peers, in the hopes of someday leading the humans' military force in a successful war against a distant enemy species that has attacked humanity in the past. The plot contains one major twist at the end, which I didn't see coming and won't reveal here. Throughout the book there are plenty of action sequences, especially mock training battles and larger scale military encounters, which hold the reader's interest and should make for a compelling movie, if the special effects are done well. But as in all good literature the plot is secondary to the deeper thoughts that it reveals.

At its core EG is a psychological drama, and a case study in power plays between superiors and their subordinates. The lead character, Ender, is a reluctant hero, and goes through much angst and soul searching as the difficulty of the tasks he is put through increase. He is not sure he is committed to the cause, and what he is being asked to do constantly changes, to the point that he feels he is being singled out for torture. He is told that he is playing a game, yet he is not sure how to win or if he wants to win. For all these reasons I can see the appeal to teenagers: to many of them, Ender's struggles probably feel like high school.

Yet there are other interesting side stories and characters that add to the depth of EG. The primary officer in charge of Ender's training is himself unsure about whether his plan will succeed. His superiors are constantly second guessing him and he knows that he will ultimately be judged by them in hindsight. He has to occasionally tell himself that the ends justify the means. To many adult readers, this will feel an awful lot like the typical professional workplace.

The minor flaw in EG, in my opinion, concerns two other secondary characters, Ender's brother and sister. Ender's sibling's share some of his personality traits and powers, yet they both have what others (including Ender) consider to be character deficiencies. Author Orson Scott Card creates an intriguing side plot involving the two of them, yet doesn't have enough time to fully explore their activities, given the primary focus in the book on Ender. A book focused on Ender's siblings, with Ender as a side plot, would be an equally intriguing book, in my opinion.

Ender's Game is heartily recommended for all adult readers, young and older.