Book review: A Nation Under Our Feet: Black Political Struggles in the Rural South from Slavery to the Great Migration, by Steven Hahn

tl;dr: Engaging history of black politics before and after the Civil War...

I suspect that Steven Hahn's A Nation Under Our Feet (ANOUF) was originally and primarily intended for a collegiate-level academic audience, perhaps in a history course studying slavery in the United States and its aftermath. However, it almost certainly received a much wider than intended audience when it won the 2004 Pulitzer Prize in history. Indeed, that is the reason I read the book, as I try to read the Pulitzer Prize winning history book every year, to expand upon the very minimal grounding in history that one receives in today's U.S. educational system. So, the "non history major" perspective is the one from which I am reviewing this book. 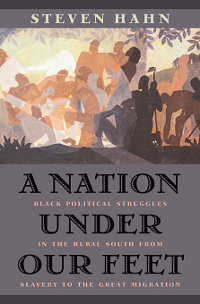 Although ANOUF is pretty dense and does resemble a typical academic tome, with long paragraphs and voluminous footnotes, the compelling subject matter and Steven Hahn's prose elevate it far above the typical sleep-inducing history book that only finds a home on dusty college library shelves. I can surmise several reasons why the Pulitzer panel chose to honor it: the importance of the subject matter (black politics from before emancipation to the great migration north); the painstaking research that Hahn put into the project (by reading this book, you get the condensed wisdom from what appears to be hundreds of other books and documents that Hahn studied); and the quality of Hahn's writing, which manages to present detailed descriptions of events in a fairly engaging manner. It's not the page turner that The DaVinci Code is, but the subject matter is far more important.

ANOUF aims to describe how blacks in the South, especially the rural South, practiced politics both during and after slavery. During slavery, of course, they had no legal representation in the formal political system, but Hahn shows how they used various informal means to disseminate information, form community views, and then attempt to change what they could. The most fascinating part of the book, I feel, is the account of politics during and after the Civil War, including Reconstruction and the backlash of Redemption. The Civil War was a far more complex event than the popular four word summary of "Lincoln freed the slaves", and the many parties involved had different views of what the war meant, what they were fighting for, and what it meant when the war was over. To a large extent, when the formal war ended, the fighting continued in other ways, and eventually the Southern whites were able to re-exert their influence. The portrait the book paints of the Democratic Party and its close alliance to the Ku Klux Klan and white supremacist paramilitary organizations is brutal, and one that would shock many modern-day Democrats who don't know the history of their party. But that's just a minor point - this book is far deeper and more nuanced than modern-day party-line politics. In fact, it does an admirable job of showing the true roots of politics, and all the different ways that black people worked together to make their views heard, through a wide variety of means.

If you are interested in learning a lot more than what you are taught in U.S. public schools about slavery; if you want to gain a greater understanding of the background behind contemporary race politics in the U.S.; if you are a Civil War buff; or if you just appreciate a good history book, then I can definitely recommend A Nation Under Our Feet.