tl;dr: Great brain food as always, but not quite the best of the recent vintages...

Every year I look forward to diving into the Best American Essays volume. It is usually the most intelligent and educational book that I read all year, which is why I call this series "brain food". This year is no exception, although I wouldn't quite rate this year's volume as highly as others. I still strongly urge readers to give it a try because if you actually make it all the way through it, your brain will feel as though it had a good workout.

Guest Editor David Brooks appears to have utilized a fairly broad definition of "essay" for this volume. Some of the selected works are what I would call "traditional essays": first-person narratives in which the experiences, emotions and thoughts of the author dominate, such as Wesley Yang's "Paper Tigers", in which he confesses to being an illegal immigrant and explains exactly how he has gone about concealing his nationality. Others selections are dispassionate fact-based articles about a topic, such as Alan Lightman's "The Accidental Universe", which discusses some of the latest scientific thinking about dark energy and the laws of physics. Because of this spectrum of essay types, and because the selections are organized by the author's last name, you don't know what you are going to read next as you traverse this volume. One way to view this book is that you are reading a selection of some of the best non-fiction magazine articles published in the U.S. in the past year. 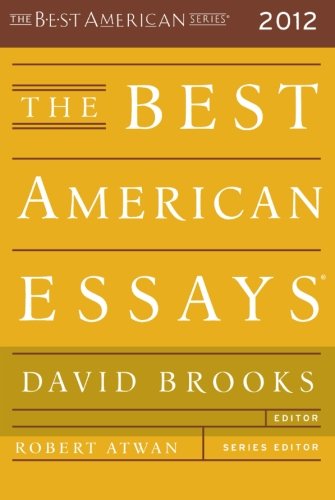 That said, the best essay by far in this volume falls into the highly personalized essay category: Jonathan Franzen's "Farther Away", his account of a life-threatening solo journey to the frontier of civilization that he undertook to help understand and deal with the suicide of his friend (and the Guest Editor for the 2007 volume of this series), David Foster Wallace. Franzen reveals much about both Wallace and himself in this essay, some through what he says and some through what he does. Wallace was a brilliant writer and much lauded by some, and while I still need to make my way through his voluminous masterpiece Infinite Jest, Franzen's essay certainly helps readers understand this complex individual and what his writings and actions say about himself and our society.

Other top-notch essays, in my opinion:

-- Marcia Angell's "The Crazy State of Psychiatry", which falls on the fact-based article end of the spectrum and which provides a skeptical assessment of the current state of the psychiatric profession and its (over)reliance on psychoactive drugs. Later in the volume Lauren Slater's "Killing My Body to Save My Mind" provides a first-person view of a patient undergoing an intense drug therapy to deal with mental illness that, perhaps, illustrates some of Angell's points. Interestingly, Slater was the 2006 Guest Editor for this series - one can only imagine what fate awaits this year's editor, David Brooks. Perhaps guest editing this series is an even worse fate than the Sports Illustrated cover jinx.

-- Miah Arnold's "You Owe Me", which attempts to explain how a teacher of terminally ill children deals with that tragic scenario, and does so in a very humanistic way.

-- Joseph Epstein's "Duh, Boring", which provides some interesting historical background and current-day views on what may be solely a First World affliction.

-- Sandra Tsing Loh's "The Bitch is Back", which may unveil more than you need or want to know about women's late middle-age "change of life", but does so in an intense, compelling way.

The one major dud, in my opinion, was Richard Sennett's "Humanism". After lecturing against academic essays in his introduction, I was surprised to see that Brooks' included this one, which is too abstract and academic for the average reader to know whether the author is stating truths or is merely scoring semantic points.

I almost always get more out of The Best American Essays than I do from The Best American Short Stories, yet the short stories volume outsells the essays volume by quite a bit. That is unfortunate. If you are not frightened off by the word "essay", which often induces dreadful school-age memories among readers, by all means get this volume and feed your brain.