tl;dr: Still as powerful a novel as the day it was published...

Thomas Pynchon is an author that I’ve been wanting to read for decades, not just because he attended Cornell, although I do enjoy the works of several other authors with Cornell connections: Kurt Vonnegut, Vladimir Nabokov, Carl Sagan, and E.B. White. I had heard that Pynchon’s books are somehow “different”: complex, puzzling, with themes of conspiracy, paranoia, technology, and the changes in modern society spawned by the tumultuous 1960s. Gravity’s Rainbow appeared on a list I saw entitled “Ten Famous Books That No One Has Actually Read”, or words to that effect, which intrigued me. But I decided to ease into Pynchon by proceeding in chronological order starting with V., which was published before I was born, although I do remember people reading it many years ago. 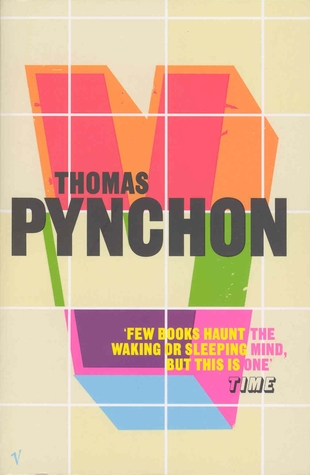 V. definitely stands the test of time, and I can heartily recommend it for readers in 2016 and beyond. It is a dense, meaty tome that requires not only one’s concentration and detailed attention to the storyline, but also (alas) multiple readings: I wish I had the time to read it again immediately upon finishing it, so that I could more fully appreciate Pynchon’s artistry and how he assembles his story. It’s a book that could easily be studied for half a semester in a junior-level college literature course.

There is so much going on in the book, with different sets of characters in a wide variety of settings, and action that jumps around in time, that it is impossible to do it justice in a summary. But the main theme is one of searching for something that may or may not exist, or have existed. The clues for the existence of the title character are completely ephemeral: a reflection of a shadow of a dream. And yet a few obsessive folks pursue V. to all corners of the globe, because V. may or may not be the most important of the twentieth century, the person who may or may not have set in motion the major historical events of the twentieth century, including two world wars.

The quest for V. appears, to the reader and many other characters in the book, to be completely quixotic, and yet there are parallels to the quests that many embark upon even now. An entrepreneur starts with a dream for a product or service that will change the world, and then labors for years trying to make that dream real, with absolutely no guarantee of success. Many major scientific advances are made this way; the scientists who find what they are seeking (the Higgs boson) win the Nobel Prize; the ones (many more in number) whose quests turn out to be fruitless die in obscurity. The artistic process also works this way. And, of course, Pynchon himself was undergoing this process by writing V.: it was his first novel, it took a lot of time and effort, and it could easily have flopped. But it didn’t.

At times Pynchon’s prose is completely grounded in reality, and at times it is beyond the fantastic. The settings range from hipster Manhattan (yes, hipsters are not a recent phenomenon) to dockyards during World War II to the Mediterranean to colonial southern Africa to the Paris performing arts scene. Pynchon has an impressive command of the English language and creates some powerful scenes: I cringed when reading his description of a doctor performing cosmetic surgery, and I don’t think I will ever forget the action that takes place in the sewers of New York or the penultimate scene of a play in Paris. The book contains many historical elements and yet also has some technology that typically only appears in works of science fiction. It is a heady mix, and Pynchon somehow puts all these elements together to create a masterful end product.

So, for the time being, I am hooked. It would be too much for my brain, I think, to go on a Pynchon binge, so I am doing other reading in between. But at some point soon I’ll dive into The Crying of Lot 49 and then, probably, Gravity’s Rainbow.