Book review: Lost in the Funhouse, by John Barth 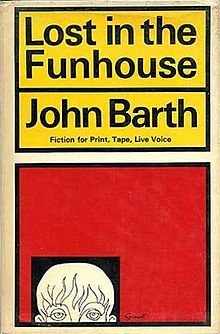 I am slowly, over the course of many years, making my way through the literary works of John Barth, whom I regard as one of the most brilliant authors of the past fifty years. Barth, in case you’ve not heard of him, is an inventive storyteller with an unmatched command of the English language and an ability to turn the perfect phrase. His writing often leaps far into the realms of fantasy and yet is thoroughly grounded in observations of present day society. He liberally mixes in satire and ribald humor in a way that reminds me of Mark Twain, which entertains the reader while keeping the pages turning even through his longest works, which top out at over 800 pages. I picture him composing at a keyboard with a wry smile upon his face as he dreams up new ways to surprise, entertain, and amuse the reader.

Lost in the Funhouse is Barth’s first published collection of short stories and was a finalist for the National Book Award in 1968. In the foreword to the edition I read Barth demurely starts by stating “short fiction is not my long suit”, a statement that, like many of Barth sentences, can be interpreted several ways, including in a humorous way. But there is much more to Barth’s writing than humor.

The stories in Lost in the Funhouse vary in form, structure, and accessibility to the non-English-major reader, as Barth is obviously experimenting with the short story format. The most enjoyable story, in my opinion, is “Night-Sea Journey”, in which Barth uses the biological process that gave rise to each of us as a vehicle to deliver some observations on the nature of life and love. It takes a while to realize what is actually happening in the story, and once the realization hits, the reader can sit back and enjoy the rest of the ride that Barth has constructed. I daresay that if 100 authors were asked to write a short story about the same event, no one would come up with something as creative as Barth’s story.

Other stories are even more out-of-the-ordinary. “Title” is basically abstract art in short story form; like many pieces of modern art, which just contain raw forms, shapes, and colors, Barth in “Title” leaves out many of the story’s details (including, as the title suggests, the title itself), forcing the reader to supply them. “Title” works as an experimental short story but this form wouldn’t work for a longer work; thankfully Barth abandons it after stating why it must be abandoned. “Menelaiad” demonstrates the power and the logical flaws within the stories of Greek mythology that have survived for thousands of years and which Barth obviously enjoys; however it is a challenging read because it is six or seven nested stories within one, and the nested quotations go deeper than in any writing I’ve ever seen before. “Anonymiad” and “Life-Story” are commentary on the creative process and yet have wildly different structures, which again showcases Barth’s talents. Although there are several recurring autobiographical themes across these stories, they are impressive for the variety of their forms; no two are structured alike.

Due to the dense nature of several of the stories contained within, Lost in the Funhouse is not the best way for a new reader to become acquainted with Barth’s writing. For that purpose I would recommend either of Barth’s first two novels, The Floating Opera and The End of the Road, which are easier reads and which hint at what is to come as Barth develops his writing style. Then, if you like those, tackle one of his epic masterpiece novels such as The Sot-Weed Factor or Giles Goat-Boy. I still have much more Barth to read, thankfully, and I expect to be amazed and amused by his writing for years to come.