I occasionally get some guff for still having a having a Hotmail email address, typically from people who do not know their software and Internet history, and don’t know where the name “Hotmail” comes from, and therefore lump Hotmail users in with AOL users. If I write the name as it sometimes was written back in the day, perhaps it will start to shed some light: “HoTMaiL”. “HoTMaiL”. Or how about this: “HTML mail”.

Hotmail was the first successful HTML, web-based, cloud-based email service. In fact, it was probably the first successful cloud-based webapp of any kind (if anyone knows of an older cloud-based webapp that is still in use today, drop me a line). It was developed not by Microsoft but by a venture capital-backed Silicon Valley startup company which was bought out for a huge premium in 1997 by Microsoft a year after it was founded.

The Internet was a very different place back in 1996. Netscape, the company which produced the first mass market commercially successful Web browser, had gone public in 1995, raising awareness of the World Wide Web and kicking off the Internet/telecom/dotcom boom of the late 1990s through 2000. Pre-Netscape users such as myself used the NCSA Mosaic browser. The Netscape browser lives on today as Firefox. But web pages back in those days were just static content.

Email also was a very different beast back in 1996. It was entirely client-server based: you had an account on an email server somewhere, usually an organization that you belonged to such as a university or an employer. Or you used an email server operated by your ISP. On the client side (your computer) you ran a dedicated email client program which would have to sync up a local email database on your computer with the email server. Microsoft Outlook eventually became the dominant email client in the corporate world. If you wanted to use multiple different computers to do email, you were asking for all sorts of trouble. A large share of the early consumer demand for laptops came from people who wanted a way to haul around their computer so that they could do email from different locations.

I never liked this architecture. The client/server syncing process was often slow and error-prone. Doing email without being on your primary computer was hard-to-impossible. I also never liked having one’s email address (and account) being tied to an organization or an ISP, because if you changed organizations or ISPs, you’d have to get all your contacts to use a new email address. That’s fine for corporate email when you change employers, but not for personal email. ISP-provided email in particular seemed to be a somewhat nefarious way to tie you to your ISP, and I had already used several different ISPs for home internet service by 1996.

I never used AOL or AOL mail, so I missed the main joke in the movie You’ve Got Mail. I had been on the Internet for years when AOL came out. AOL was basically a proprietary bulletin board service that had a few ways to break out of AOL and do some things on the Internet; it was a sort of “Internet training wheels” (I do have to give them credit for getting millions of people online in some fashion). So I never had an AOL address.

Into this mess steps Hotmail. I was blown away when I first heard about it. True Internet-based email where the email server resides in the ‘net (a.k.a. “the cloud”) and you access it from any Web browser on any Internet-connected computer in the world, including an Internet café on the other side of the world - wow! This is the way it should be done, I thought. I quickly signed up for an account, and have been using it ever since. So I’ve had the same email address for the past 20 years. Microsoft then bought Hotmail, and they’ve tried a variety of schemes over the years to get users to use Microsoft-sounding email addresses, the latest being “outlook.com”. But fortunately they’ve never shut down hotmail.com; if they did, I would finally have to switch. Yahoo Mail and even Gmail were basically just copycats of the original Hotmail. Gmail’s main innovation was scanning your emails for keywords to feed you targeted ads; sorry Google, not interested. 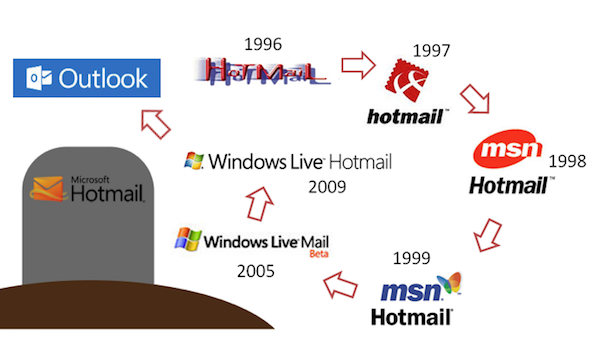 Hotmail was the true innovative pioneer, not just of web-based email, but of cloud-based webapps in general. Fast forward 20 years and the range and power of cloud-based webapps is truly impressive. Google has pretty much put Microsoft’s entire Office suite into the cloud. Hotmail was Microsoft’s first move into the cloud, a migration that continues with Office365 and other apps. Cloud-based SaaS is becoming the dominant business model in the software industry. And, of course, today I work at a cloud-based SaaS webapp company, Uprising Technology, that is doing some amazing things in the higher-ed software space. But it all started (correct me if I am wrong, please) with Hotmail.

So I still hang on to my Hotmail address, which I like to think identifies me as a very early-adopter of cloud-based webapps. Perhaps someday it will be retro-cool 😎.