The End of Windows (for me)

tl;dr: A burden has been lifted...

I decommissioned the last Windows PC in my household, the “family PC”, more than a month ago; it is sitting in the basement awaiting an Ubuntu install. Its replacement, a Chromebook, is performing admirably for Web browsing and Google web apps, although printing is a challenge. So I am finally free from Windows in my personal and professional life, after more than two decades of hassles. I feel liberated: it’s all Mac OSX, iOS, and Linux for the foreseeable future.

I recall the crude pre-3.0 versions of Windows, when Windows was more of a COW (Character-Oriented Windows) implementation than a true GUI (Graphical User Interface). Windows 3.1 is the first version I started using semi-regularly, and I continued on through 95, 98, 2000, XP, and all the way up to 7, mostly because the companies I worked for standardized on Windows Office. Technical folks such as myself typically had another workstation or two (first VMS, then Unix, and then Linux machines) for serious development work: I am pretty sure that the first time I used the WWW it was on a Sun Sparcstation running Solaris and the NCSA Mosaic browser.

All this got me to thinking that I should write down the three deficiencies of Windows that bothered me the most, lest I forget them over time and be tempted by a future sleek Microsoft Surface design:

1. All too frequent reboots

Operating systems are supposed to just work, period. It’s the application programs that are supposed to be started and stopped, and that might crash due to poorly written code. The operating system should be rock solid, and a reboot should be an extraordinary, infrequent event. Having developed computer products and systems for decades, with a variety of operating systems, I know from firsthand experience that it is possible to have an operating system run for years without reboot. Yes, the typical desktop or laptop OS does many more complicated operations than single-purpose computer systems, but OS reliability and uptime is paramount.

For me the most frequent cause of rebooting Windows was simply putting my laptop to sleep and then trying to resume working later. Even running Windows 7 on a Dell XPS 13, which was my last Windows laptop, I had frequent issues. So I long ago got in the habit of shutting down Windows entirely nearly every time I closed my laptop at the end of the work day, and then rebooting the next time I used the laptop. However this occasionally triggered another problem: the dreaded Windows Update screen: 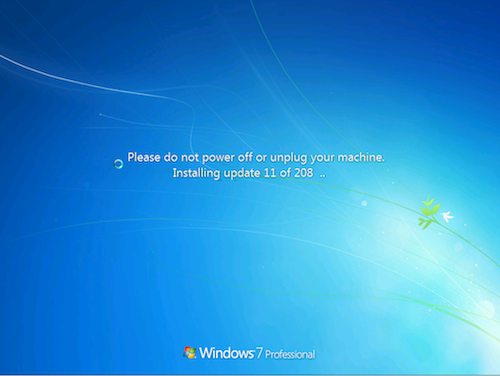 Was late to way too many dinners because of this

Earlier versions of Windows had other occasions necessitating a reboot: the final step in installing an application was almost always a reboot, and changing IP addresses and other config info also forced a reboot. When I recently helped my parents get Skype installed on their Windows 10 Surface Pros I had to do a couple of reboots, as well as wait half an hour for a Windows Update.

The most depressing reboot would be the one after a notorious “blue screen of death” Windows crash:

By contrast I typically reboot my Macbook around once a month. I open and close it several times a day, and it almost always springs to life instantly. After about a month I find that certain applications start slowing down or behaving weirdly, which a reboot fixes.

2. Bogging down over time

The Windows PCs I got always ran fast when I first got them, then they’d slow down over time. I tried a variety of countermeasures: cleaning up files and programs that somehow made their way onto the PC; monitoring CPU and disk utilization; and defragging the hard drive. The operation that worked best was to back up everything, reformat the hard drive, then reinstall Windows and all the application software, but that took a few hours and was risky. Still, I’d typically do it once a year or so on the family PC, to avoid falling into the trap laid by Microsoft and Intel, whose solution to a slow PC is to have you buy a brand new one.

The other aspect of performance that bogged down on Windows for me was disk utilization: it seemed that Windows would spend all too much time accessing the hard disk (perhaps swapping memory pages in and out). A short Word document apparently couldn’t fit in memory even on a machine with multiple gigabytes of RAM; there would be a big pause for a disk operation when scrolling between the first and second page of the document. Often I would wander past the family PC an hour after it was last used and the hard drive light would be on almost continually as Windows was doing...who knows what? Or maybe it was the virus-scan program I had to install because of the next major deficiency:

Because Windows is the most popular desktop and laptop operating system, it became the primary target of most virus makers and malware makers. I was pretty good about avoiding these on my company-issued Windows laptops with corporate-enforced antivirus clients, but the family PC would occasionally get infected. So for years I used Ad-Aware and Norton. Norton not only cost money, but it was a major performance killer, as a quick glance at the CPU utilization meter would show. I never understood why Microsoft couldn’t build effective virus protection software into Windows itself.

Bottom line: I am very happy to give up my Windows sysadmin duties 😀