Inside the belly of a unicorn

tl;dr: Real estate can have a real impact on startup companies...

One of the interesting things about having worked for startups across four different decades is to see how the startup environment has changed over time, for better and for worse. Some of the changes for the worse have been the regulatory hurdles for doing an IPO (Initial Public Offering), which used to be the primary goal for startup companies (more about that in a subsequent blog post). But one of the changes for the better has been the real estate market, which has evolved to offer much more startup friendly spaces and leasing terms, as typified by the space at WeWork that Uprising Technology occupies today.

There’s a fundamental reason behind the common story (e.g. HP, Apple) of a startup company being founded in a garage, basement, or attic: few landlords want to rent space to a fledgling company that doesn’t have much money, has no demonstrated longevity, and whose founders might not fit the profile of seasoned business executives. The first startup company that I was involved with, Xciton (later acquired by National Semiconductor) in the 1980s, had a very tight coupling between the company and its landlord: the landlord was the head of a successful plumbing company. He was also a major investor in the company and sat on the board of directors. He owned the building occupied by Xciton, which was on land adjacent to the building used by his plumbing company. Xciton was far from the only startup company in that era whose landlord was also an investor in the company, either major or minor. Sometimes companies would carve off a small slice of equity for the landlord as part of the lease deal.

Most commercial real estate owners want their tenants to sign ten year leases (sometimes longer, in a few cases shorter) for a fixed amount of space. Buildings last for multiple decades, so even a ten year lease means that the building owner likely has to find multiple different tenants for each portion of the building over the course of its lifetime. But whereas a building owner may consider a ten year lease to be short in duration, it is an incredibly long time frame for a newly founded startup company, which will likely either outgrow the space long before the ten years are up or which may disappear, a situation which is obvious to the building owner. So building owners seek out established, stable companies for tenants, such as bank offices, insurance companies, law firms, etc. The nicer the real estate, the higher the demand, and the more likely it is that the landlord will be able to rent to one of these types of companies. This is one of the fundamental reasons why the prime downtown real estate in major cities was occupied in the past by the firms I mentioned, and why startups were more typically housed out in the suburbs.

The startup that I cofounded in the late 1990s, Oresis Communications, was able to strike a deal with a fairly forward-thinking (or risk-taking) real estate owner in the Portland suburbs that owned a large office park with a dozen or more buildings, some single tenant, most multitenant. He had enough existing inventory, with more coming online as additional buildings were built, that he was willing to take a risk on a young startup company. I can’t recall if we had to sign a five-year or a ten-year lease, but whatever it was, it did feel strange signing a lease for a longer term than the company had been in existence up to that point. But before he was willing to lease to us, he did reference checks and called our venture capital investors; if we had not had well-recognized VC firms behind us, we likely wouldn’t have been able to lease in that office park and might have been stuck much longer in the basement where the company was founded.

Fast forward to the present. Startup incubators such as 1871 (founded in 2012) are more prevalent. They offer a support network and a variety of educational and advisory programs for their entrepreneurs. But at their core they offer a solution to the startup real estate problem: they will rent nice downtown office space on a month-to-month to fledgling companies, and allow them to grow or shrink their space as dictated by the success or lack thereof of the startup company.

Additionally there are now real estate companies such as WeWork which operate by this business model: they sign a long-term lease with a traditional property owner, then subdivide the space into many small, separate offices which they rent on a monthly basis to pretty much all comers. The property owner gets an assurance from WeWork that WeWork will be paying rent for the entire term of the lease (say ten years), and then it is up to WeWork to continually attract enough month-to-month tenants to fill up enough of the space to make a profit. The WeWork tenants, Uprising Technology among them, gain the benefit of easily being able to scale our space up and down to match the needs of our business. 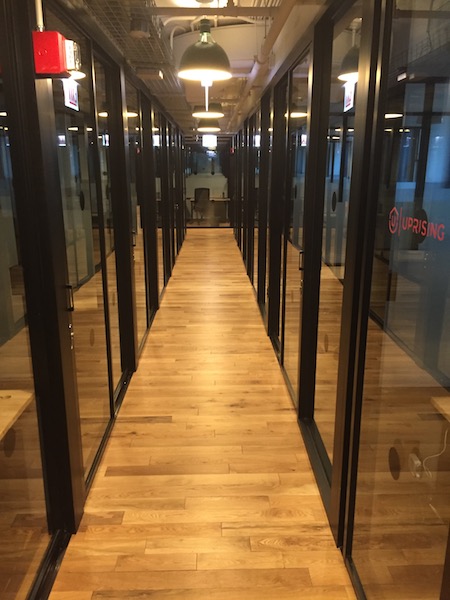 WeWork also takes over the operation of almost all of the support infrastructure for the space. They staff a reception lobby, arrange janitorial and building maintenance services, and operate the IT infrastructure. They make sure the coffee is brewed in the morning, and even provide beer-on-tap, although I’ve not seen too many people imbibing before the end of the workday. All these services free Uprising from having to do them ourselves; we get a modern private office space in a classy downtown Chicago highrise, with all the amenities we need, for one price.

WeWork itself is a startup company, and a fairly high-flying one at that, having achieved unicorn status. I do believe in their fundamental business model: there is a definite need for flexible, short-term office space in the downtowns of major cities. But like all startups, they will have to balance the cash outflow (for the long term building leases) with the cash inflow (from monthly rent) to ensure their ultimate success and profitability. In the meantime, they offer a great solution to the real estate problem faced by young startup companies.