tl;dr: Strange things happen when the Feds (the FCC in this case) set prices...

In late 2006 telco/ISP BellSouth was acquired by telco/ISP SBC (known as AT&T after another acquisition). When large U.S. license-holding communications companies combine, the FCC has to approve the deal and transfer the licenses. The FCC almost always, regardless of the party in power at the time, uses the occasion to extract some concessions from the two companies for the benefit of consumers, a.k.a. “the public”. 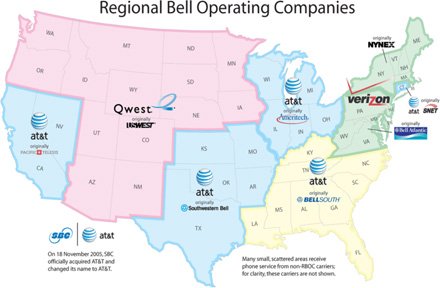 Telco/ISP landscape at the time of the deal

Among the documented concessions the FCC won was that the combined company would have to offer a new inexpensive $10 Internet access service, which was somewhat derisively called “McData” Internet service due to its relatively low speed. Additionally, the combined company would have to provide a free “ADSL modem” to any customer converting from dial-up Internet to DSL-based Internet with a one-year contact. The intent of these two concessions was to benefit consumers who couldn’t afford broadband Internet at the time and were stuck with dialup or nothing.

What could possibly go wrong?

Well, there are some other affected parties who didn’t have a seat at the table where this deal was negotiated. At the time I worked at one of those parties: Westell, which supplied ADSL modem/routers as well as other Internet wireless gateways to BellSouth (I prefer to use the term “modem/router” because the heart of the product is a ISP-grade router, not the one modem port). Westell sold ADSL modem/routers to BellSouth which BellSouth then sold along with their Internet service to end consumers. Thus Westell was the designer, manufacturer, and wholesaler, and BellSouth was the retailer, for a product the Federal Government, with the full force of law behind it, had just declared was to be sold to certain consumers in certain territories within the United States for $0.

Up to this point in time Westell built every single one of those ADSL modem/routers in its U.S. factory, employing hundreds of assembly-line workers in a 7-days-a-week, 24-hours-a-day factory. The company had successfully ridden the price curve downwards for more than a decade, but was feeling increasing competition from overseas suppliers.

After the merger closed AT&T, wanting to minimize the money it lost on each $0 product it sold, and also wanting to take advantage of its greater purchasing power, put the ADSL modem/router business up for bid. From the suppliers’ point of view it was a pretty brutal competition. At Westell we had been trying to differentiate our product on the basis of quality and additional software features, but now the Government was saying “nah, just squeeze literally every penny of cost out of this product.”

Not too long thereafter Westell, needing to reduce its own costs further, outsourced the manufacturing of these products to overseas contract manufacturers. Almost all of those assembly line workers were let go and the equipment was sold off. The company continued to develop Internet access products for several more years, by writing software that ran on hardware built (and in some cases designed) overseas, before selling the product line to NETGEAR.

It would be fallacious to say those manufacturing jobs would still be here today in the U.S. if the FCC hadn’t cut that deal. Prices had been declining for years thanks to Moore’s Law, and they continued to decline for years after. All I can directly blame the FCC for is giving one strong push at one point in time in the downwards price direction, and also for demoralizing some hard-working folks (it’s not a good feeling when your own Government declares that your company’s product should be free). My point is not that the FCC has the power to save U.S. manufacturing jobs; rather, it is to demonstrate how other parties can be affected by deals the FCC negotiates.