tl;dr: A collection of intense, soul-baring, personal essays, almost all of which concern the author’s most difficult life experience...

The Best American series of essays and short stories are two other anthologies I read every year, along with the O. Henry Prize Stories. While the Best American series anthologies do each have a series editor, the final selections for each year’s volume are made by a guest editor from the literary world. Most guest editors take advantage of the opportunity to apply their own personal criteria to the selections, which leads to greater variety but less consistency across the volumes over the years. 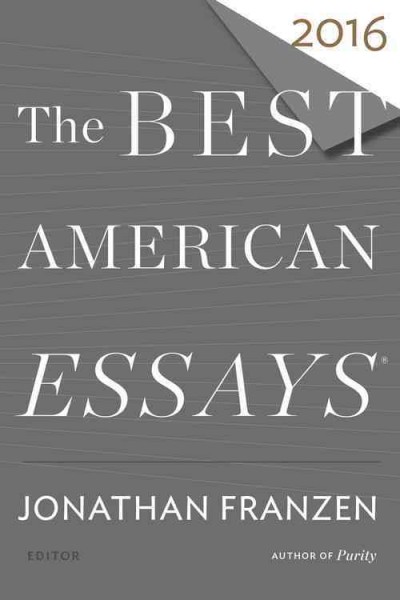 This year’s guest editor for the essay series is Jonathan Franzen, which is fitting given not only his stature as an author and essayist but also given his friendship with the late author David Foster Wallace (DFW). DFW contributed to this essay series and guest edited it in 2007, not too long before ending his own life. Several years ago Franzen wrote a wonderfully heartfelt essay entitled “Farther Away” about his relationship with his troubled friend and his attempt to come to terms with DFW’s suicide. Now Franzen is editing this year’s volume, which in some sense completes a cycle which hopefully will not repeat.

One of the best essays in the book is actually the one that Franzen wrote for the introduction, in which he explains that risk taking is the top criteria he looks for in an essay. He then provides an example from his own life by writing about his struggles with cigarettes and how he ultimately failed to hide his habit from his staunchly anti-smoking mother. Franzen’s choices are true to his word: the subject matter for a large majority of the selections is what must be (I hope) the most painful or shameful episode that the author has ever experienced. For example, Lisa Nikolidakis’s “Family Tradition” begins: “On my twenty-seventh birthday, in a two-bedroom bungalow in New Jersey, my father murdered his live-in girlfriend, her fifteen-year-old daughter, then shot himself.” There are no essays in this book about the beauty of a mountain sunrise. The overall quality of the writing suffers a bit in this volume as compared to prior years, given Franzen’s emphasis on subject matter.

My favorite essays in this volume were:

“Ordinary Girls”, by Jaquira Díaz: a firsthand view of the life of a teenager from the proverbial wrong side of the tracks, who is wasting her life away while nearly everyone around her does the same, to varying extremes. The fact that Díaz survived to be able to write this powerful essay is itself a miracle.

“The Lost Sister: An Elegy”, by Joyce Carol Oates: Oates is obviously an excellent writer whose prose smoothly carries the reader along the arc of her storyline. In this essay she writes about her younger sister who suffers from severe autism, which prevented her from ever leading a normal life, and which prevented Oates from ever getting to have a relationship with her sister.

“My Father and The Wine”, by Irina Dumitrescu: this essay about an immigrant family with a patriarch who exerts tremendous will and effort to preserve some of his heritage will ring true to most readers, since it is really an essay about how the world changes between generations.