tl;dr: A technically astute futuristic thriller with much to say about where humanity may be headed...

William Gibson is not interested in technology for its own sake, but more so in how people use it and incorporate it into their lives, and ultimately in what impact it has on humankind. In The Peripheral Gibson does describe many fascinating, seemingly plausible, future devices and systems, based on advances in nanotechnology, drones, 3-D printing, pharmaceuticals, telepresence, implants, prosthetics, artificial intelligence, gaming, cloud computing, bioengineering, remote controls, and high-speed broadband. He uses these advances in technology to construct a thriller of a plot line involving time travel that holds the reader’s interest throughout. However what this reader will remember most about The Peripheral are the conjectures Gibson makes about future society. 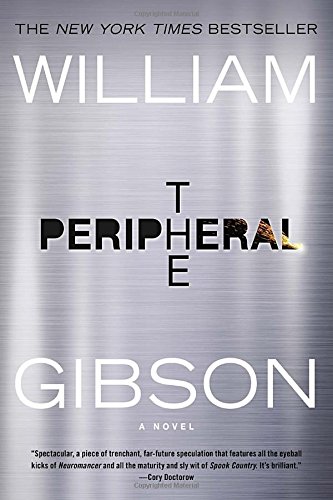 In the social realm, Gibson projects various trends that are already underway: income inequality and the resulting bifurcation of society; the death of rural America where few opportunities exist for the residents (mainly illegal drug manufacturing, military service, Wal-Mart, and hustling); the technology-enabled surveillance state; and a political ruling class which is distancing itself further from the masses and which operates in service to (and partnership with) wealthy oligarchical families. In the future as portrayed in The Peripheral the world is ruled by kleptocrats who control all levels of government: basically, the model of Putin’s Russia gets adopted worldwide (n.b. The Peripheral was published in 2014, two years before the 2016 U.S. presidential election). Add to these social trends some geological and biological trends including climate change and loss of biodiversity, and it might appear that Gibson’s vision of the future is entirely bleak.

Yet science and technology continue to advance, sometimes in frivolous ways, but also in ways that minimize or eliminate the problems facing mankind, especially given the creative ways that people use technology. Gibson describes many technological marvels in The Peripheral including a form of time travel that involves information flow. At the same time that some people are time traveling, plenty of others are suffering. As Gibson famously said, “the future is already here - it’s just not very evenly distributed”. It is this dichotomy that preoccupies Gibson, and that might indeed be the key determining factor as to whether mankind survives long-term.

The science in The Peripheral seems more plausible than most science fiction. Time travel happens not by moving atoms (objects) across time but by sending information; it is effectively communication rather than transportation, which in general is much easier. I never liked the Star Trek “Beam me up, Scotty” version of travel, because figuring out the exact state of all the atoms that comprise an object, then transferring that state information and the atoms, and then reassembling all the atoms at the destination seems unfathomably complex and probably impossible because of Heisenberg’s uncertainty principle. In The Peripheral time travel creates a multiplicity of universes (timelines or continua), with input from the future changing the path of the present such that it branches and is no longer on the continuum that produced that future state because the present state is now different. This makes much more sense that the “Back to the Future” version of time travel, wherein physical objects in the future fade away as the past events which produced them start to become uncertain; this violates the laws of physics, specifically the conservation of mass-energy, as matter cannot just disappear. So kudos to Gibson for envisioning some more believable science.

The Peripheral proceeds at a break-neck pace from page one. Gibson throws the reader right into the action without any preliminaries, meaning that the reader will immediately have to start assembling the pieces into some sort of coherent whole. Later, as more context is revealed, it becomes clearer what was happening at the beginning and what the primary storyline actually is. Eventually, it all does make sense. I certainly won’t spoil the ending except to say that, thanks to the forking of time that occurs as a result of time travel, there are many possible futures based on today’s present state.