The first rule of marketing

It may sound silly, flippant, or self-evident, but my number one rule of marketing is: be in a good market. This rule applies at both the company level, as companies decide which markets to get into and out of, and at the individual level, as a person decides what industry to join, what company to work for, and what career path to pursue.

People like to think that they, and the companies they work for, succeed because of their actions; that they are smarter or out-work or out-hustle the competition. But a lot of success is due to being in the right market, whether by luck or design, at the right time. Yes, there might be a few great salespeople who can, as the expression goes, “sell ice to Eskimos”, but you’ll be much better off selling ice to desert dwellers before Häagen-Dazs opens up a shop.

The best market I’ve ever been in personally was the Internet boom from 1995 to 2000. The boom is best demarcated as the period from Netscape’s IPO, which showed that the World Wide Web was achieving mass market recognition, to the bursting of the dot com stock market bubble, when people finally realized that not every Internet company was going to be the next Cisco (the premier Internet company at the time and, for a while, the most valuable company on the planet). It was an era of hyper-growth in all aspects of the Internet, from the raw infrastructure and networks themselves to equipment to software to applications to e-commerce. The joke was that if you knew what “IP” stood for you could get a job. Investment money flowed in, companies were getting founded and sold for high valuations two years later when they barely had a product, let alone customers, revenue, and profits (and not many did have the latter). It was the best of all possible markets.

Ultimately it crashed as economic reality set in, in particular the lack of profits to justify the level of investment. Since then the Internet has continued to grow dramatically, of course, but the market is not what it was during the boom years. Investors are more careful. There’s been consolidation among the ISPs, with the rise of the dominant national cable, fiber, and wireless ISPs in the U.S. For ISP suppliers, the market is much tougher because of ISP consolidation and the rise of offshore competition (e.g. Huawei). The government is more heavily regulating the Internet, whether it be the FCC enforcing Title II on the ISPs or various other regulatory and legal efforts concerning privacy, fairness of search results, and attempts to reduce/eliminate hate speech and fake news. There are still many amazing new things that can be done on the Internet: cloud computing, sophisticated web applications, mobile apps, virtual reality, Internet of Things. But everyone operating in the Internet ecosystem needs to be more selective about the opportunities that they pursue. 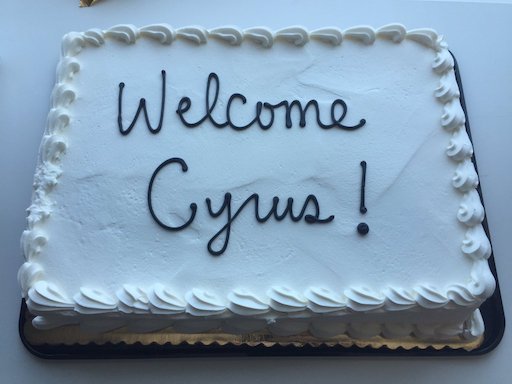 It's a good sign when the customer makes you a cake

Yet if the first rule of marketing is so obvious, then why do I so often see individuals and companies toughing it out in really bad markets that are trending downwards and likely to continue doing so for the foreseeable future? I recently transitioned markets within the Internet ecosystem, from supplying systems and software to ISPs to delivering a cloud-hosted web application to clients in the higher education space. One of the primary reasons I did so was to position myself in a better market by applying rule number one. The market I’m now in is indeed much healthier: when a customer is so happy to receive your product that they throw you a party and make a cake, it’s a small sign that you’re in a better market. I still keep in touch with people in my prior industry, and none of them has any stories about customers making them a cake. They do have stories about customers engaging in bidding wars and hardball negotiations, and involving them in lawsuits. That’s not a good market.