The higher the tech, the lower the margins

High technology, while often viewed as a glamorous business filled with smart people inventing the future and being richly rewarded for it (think of the stereotypical start-up success story as typified by Google or Facebook), is actually often a tough market because of hyper-competition. If an interesting new market opportunity appears on the horizon, such as autonomous vehicles, there will often be a large number of both established companies and startup companies that pursue it. A partial list for autonomous vehicles: Google, Uber, perhaps Apple, the Big Three, foreign car companies, plus startups working on aspects of the problem.

The venture capital model is built to both cause and accommodate this situation: venture capitalists collectively fund a dozen or more new companies in a new area, and over time one company wins and becomes the dominant market leader, receiving further investment and perhaps doing an IPO; a few others hang on and survive but don’t make much money; and the rest close their doors. The odds of any one company being the ultimate winner are low.

Often less glamorous markets are better ones: it can be easier to succeed making low tech products than high tech ones. HDTVs are a great example: it takes billions of dollars and ultra sophisticated manufacturing to be a leader in HDTVs, which ultimately sell at very low margins because of competition. Yet the wall mounting bracket for the HDTV is a simple piece of machined metal that has much better margins coupled with much lower capital investment needs. Venture capitalists want to invest in the next hot technology area; they don’t found a dozen companies to make wall mounting brackets. 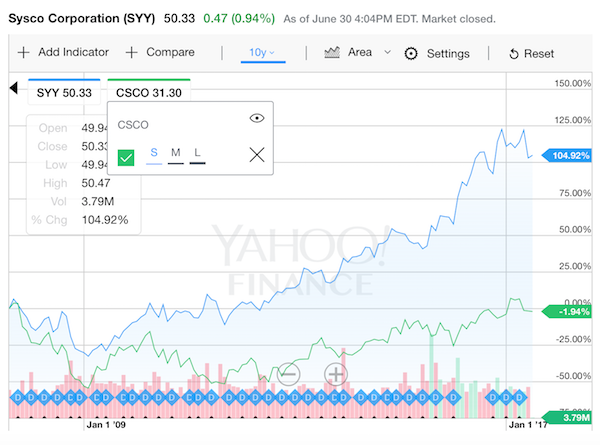 SYSCO has been a better long-term investment than Cisco

Another, more personal example: in the mid-1990s I was VP Engineering at a fast-growing Internet company. I was approached by an Engineering manager who had left the company five years prior to start a high-end Thai restaurant with his family (he was the leader). That restaurant was a big success: it had rave reviews, long lines on the weekend, and had spawned a couple other branch restaurants. In fact I enjoyed eating there myself; I had no idea that he was the one who had founded it until he told me. He was driving a really nice car, wearing well-tailored clothes, and had obviously made some money from his success. But he was interested in resuming his technology career after a long gap. We had an in-depth discussion about how much technology had changed in that period (it was the advent of the World Wide Web) and what it would mean to jump back into the high tech rat race: how much he would have to learn, how hard he would have to work (he had gotten used to being his own boss), and what pay level he could expect. He decided that he would be satisfied with having transitioned out of high tech years ago into a very successful second career as a restauranteur.