A gold watch day: thoughts on John D. MacDonald’s The Girl, the Gold Watch & Everything

tl;dr: He inherited the power to stop time, and that’s when life began...

July 3, 2017 was what I call a “gold watch day”. I’m not referring to someone’s retirement and the traditional retirement gift. Rather, I’m referring to the watch in John D. MacDonald’s The Girl, the Gold Watch & Everything, a pulp science fiction book published in 1962 which I first read as a teenager. Even though it is one of scores of books cranked out over MacDonald’s prolific career, only a few of which I have read, and even though it could never be classified as fine literature, it has stuck with me ever since. This is for two reasons: it presents, in a very fun-filled way, one of the fundamental battles we all wage, which is the battle against time; and the gold watch it describes is the only superhuman power I have ever wanted, since reading the book, which I cannot have. 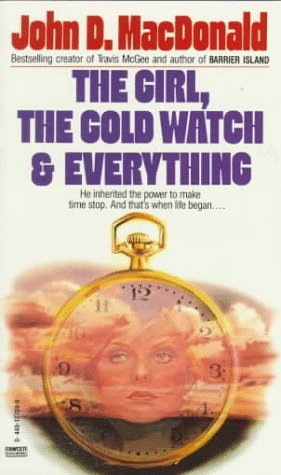 I won’t, in this post, give away any more of the book which isn’t already described on the cover of the paperback copy that I have, which is where the “tl; dr:” above originates. The magical watch allows the person holding the watch, upon activating its secret feature, to effectively freeze the state of the world for everyone and everything except the holder of the watch. The watch holder gets to move around and think and manipulate the physical world while it is in the frozen state. When the watch holder is ready, he/she can turn off the freeze feature and the world resumes moving at its normal pace. As the book amply documents, in examples which run the gamut from funny to ribald to serious, that one magical power is all that is needed to do just about anything, and to solve most problems. You don’t need superhuman strength or the ability to fly or X-ray vision if you just have the power to freeze time.

We are constantly battling time, which marches inexorably forward. Students face deadlines for assignments, papers, lab write-ups, projects, and theses. Most tests are timed. There are plenty of choices students must make between studying or having fun; the watch would allow the student to do both: freeze time, study, then resume time and go have some fun. MacDonald’s gold watch would be of obvious benefit while in school.

Similar pressures exist in the business world: there are plenty of deadlines and customer deliverables, and choices that must be made about how to best spend one’s time on the job. Want to get down to “inbox zero”? Just freeze time, work through your inbox, then resume. Startups especially are in a race against time, but so are established companies, even though they possess greater momentum. Striking the proper work/family balance is all about deciding how to spend one’s time; the watch would help greatly here. It would also eliminate the excuse most people have about exercising: people would be much healthier if they had MacDonald’s gold watch. It is pretty much all you would need, in my opinion, to fully master life by conquering time.

In the business world, the closest we ever come to MacDonald’s gold watch are days like July 3, 2017. Because it fell on a Monday and Tuesday was the Independence Day holiday, my company officially had the day off, as did our customers. No new work items came in that day. For me it was a highly enjoyable day, as it provided the opportunity to get some tasks done without interruption and without new tasks appearing, which often leads to a re-prioritization. I could just make my “to do” list at the beginning of the day and work through it, with the only change to the list being tasks getting removed from the top of the prioritized list. It was a fabulous day, as time in the business world was effectively stopped for everyone but me.

Elon Musk may dream of traveling to Mars someday, but I still dream of that gold watch.