tl;dr: A descent into insanity, perhaps...

I have some tomes of classic literature in my “to read” pile, and I finally tackled one of them: Saul Bellow’s Herzog, which was first published around the year I was born. It was a contemporary novel when it appeared, so it takes place in a time and place that is recognizable to me, but one that I and most other prospective present-day readers did not experience personally. Saul Bellow is considered one of Chicago’s most renowned literary figures, and was also an inspiration for one of my all-time favorite authors, Philip Roth, so I wanted to see what all the fuss was about. 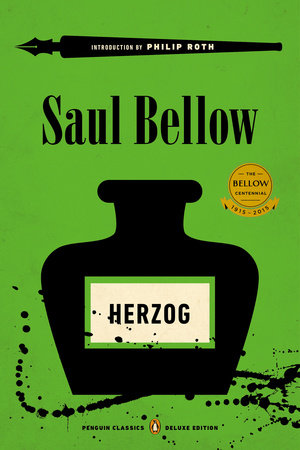 Herzog is a challenging book to read, for several reasons. Saul Bellow is a highly intelligent author, and the ratio of deep thoughts to plot-explanatory text and dialogue is about as high as a reader is ever likely to run across. The title character, Herzog, is a professor, and the majority of the book concerns the thoughts in his mind, many of which are abstract. The prose alternates quite often between a detached third-person narrator, first person (as though Herzog were writing the book), and epistolary form (letters and short bits of text written by Herzog to others). On top of it all, the central question of the novel concerns the mental state of Herzog, who may be going insane and is at a minimum depressed, sometimes admittedly so. So if you’re thinking of tackling Herzog, be prepared for a mental workout.

Herzog’s sanity is the central question, but what drives him to that point is the difficulty of integrating his intellectual life with modern-day living. As an academic he has spent years researching the abstract thoughts of long-dead intellectuals, and attempting to synthesize new paradigms, none of which matters to the common man on the street. Yet Herzog also walks those same streets; he has much trouble conducting himself in the real world, especially when relating to others. The contrast between one’s mental life and one’s physical life will be somewhat familiar to all knowledge workers, but Herzog suffers that conflict to its extremes, by carrying the weight of the world and his self-diagnosed deficiencies around with him constantly.

Is Herzog insane? If so, what, if anything, should be done about it, and by whom? After finishing the book, the first sentence still rings true: “If I am out of my mind, it’s all right with me, thought Moses Herzog.”

The edition of Herzog that I read contains an analysis written by Philip Roth, which is much more in-depth than what I am writing here. There is doubtless a connection between the two Jewish-American authors, in terms of the themes they explore and the style of their writing, which is often unrestrained, emotional, and deeply personal, with a strong sense of place. I have now read just one book by Saul Bellow and more than a dozen by Philip Roth, whose novel The Counterlife remains one of my all-time favorites. Roth would not have been the same writer without Bellow as his predecessor and guide.