tl;dr: A worthy successor that all who fell under the trance of the original should see...

I try to write my reviews without disclosing much of the plot, but if you want be safe, I’ll put my recommendation first so that you can skip the rest for now: this is a must-see for anyone who enjoyed the original Blade Runner. I also definitely recommend watching the original again shortly before seeing the sequel. 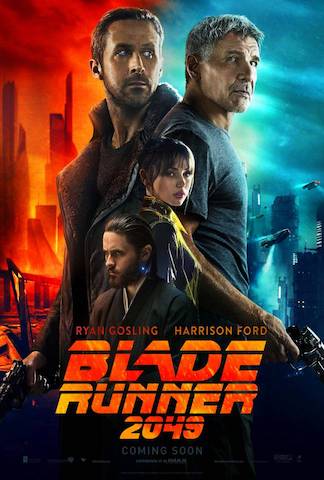 Unlike some, I actually like the fact that it took thirty-five years for Hollywood to create a sequel to the original Blade Runner. My recommendation would be to continue at that pace, which would mean I will hopefully live to see the trilogy completed. One of the qualities which made the original Blade Runner my all-time favorite movie was the deep questions it posed and answered about artificial intelligence and what it means to be human. Many people thought the ending of the original was vague; the footage used for the ending was changed during the various reissues of the original, culminating with “The Final Cut” version of the movie. The ending was always clear to me, however: Deckard, whose job is to apply the Turing Test and eliminate failures, concludes that it has been passed.

My biggest fear, when I heard that a sequel was being made, was that it would degenerate into a soap opera, concerned solely with who married whom, who had a baby, etc. A movie needs to ponder some serious issues in order to elevate itself above the level of a soap opera, and to differentiate itself from the majority of the drivel that Hollywood produces. The original Blade Runner focused on one of the most significant questions of all: can mankind play God and create an intelligence which exceeds the creator’s? Since the original answered that question, I struggled to guess what topic the sequel makers would choose.

Fortunately, Blade Runner 2049 is much more than a soap opera, although it also does answer some questions about what happened to the surviving main characters from the original. It focuses on the political issues of power and enslavement, as mankind continues to struggle to control the superior beings that have been created. These issues were secondary ones in the original; here they take center stage. But because the original pursued an even more important topic, and because the original first brought to life the visionary post-apocalyptic world which the sequel continues, I think the original will always be the more important film.

While not quite the equal of the original, the sequel is very satisfying, especially to fans like myself who have waited thirty-five years to return to that world. Earth has gotten even bleaker since the timeframe of the original, as several other severe catastrophes have occurred in the intervening time. The visuals and cinematography of Blade Runner 2049 are even more stunning than the original, as befits having more advanced special effects and computer image generation. From the opening minute, the viewer is transported into that bleak, depressing future, and the spell is not broken until the movie ends. I will never again be able to travel to San Diego or Las Vegas without remembering what those places look like in Blade Runner 2049

There are many small pieces from the original which are resurrected in Blade Runner 2049, which fans will appreciate and which provide continuity. One such small piece: the voice-command-driven zooming of images, accompanied by a clicking noise. Of course the biggest pieces are the surviving main characters, who look like they’ve aged more than thirty-five years. The wear and tear on their faces and bodies is appropriate, given the bleakness of the world in which they’ve managed to survive. Harrison Ford gives a strong performance, as does Ryan Gosling, whose somewhat plain vanilla looks and emotionless, subservient mannerisms are well-suited for the character that he plays. The most fascinating character, and the happiest by far, is someone who in today’s world would appear to suffering by living confined in a bubble, accompanied solely by memories and artificial simulations. But when the outside world is as bleak as it is in Blade Runner 2049, this character may have a better life in many ways than everyone else.

Much care and craftsmanship went into the making of Blade Runner 2049; the attention to detail permeates every scene. Because Blade Runner 2049 uses some of the same yet-to-be-invented futuristic technologies which have also appeared in other movies, there are several scenes that feel like Blade Runner 2049 is following the lead of other movies. There’s spherical crystalline memory technology reminiscent of the Pixar film Inside Out; performances from long-dead entertainers being viewed in a post-apocalyptic world, which is similar to some scenes from WALL-E; and a scene where a female virtual AI is embodied in a real woman, which is very similar to a scene in the movie Her. Blade Runner 2049 puts its own unique touches on these scenes. Given how much the original Blade Runner inspired other films, it was interesting to see other films inspire Blade Runner 2049.

Like the original, Blade Runner 2049 is a complex, intelligent movie that provides the viewer much to ponder. I’m sure it will bear up under repeated viewing. Having seen it just once as of now, I feel like I’ve seen all the pieces of a jigsaw puzzle and what the end result picture looks like. I now have to watch it again to see exactly how all the pieces fit together.