tl;dr: Would benefit from a second edition, as the world has changed a lot in three years...

One of the biggest challenges of writing any technical book is that technology advances and changes after the book is published. This is especially true in the fast-moving world of web applications, the testing of which is the subject of this book. Authors can try to choose examples and tools which are more standard and hence less likely to change, but alas there will always be change in the technical world that is well beyond the author’s control. 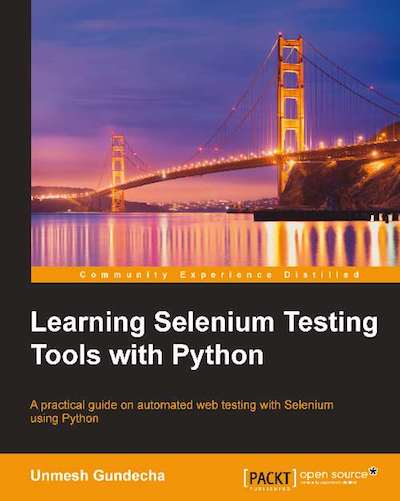 This has happened to Learning Selenium Testing Tools with Python, written by Unmesh Gundecha and published in December of 2014. It would benefit from a second edition. There is still a market need for this book, as web applications continue to grow, Selenium remains the primary browser interface tool for automated testing, and Python is now one of the most popular languages in the world.

Learning Selenium Testing Tools with Python is primarily aimed at developers and testers who are new to web application testing, and who want to learn how to use Selenium and Python to create automated tests. The book does a fairly good job of covering the basics. It does not cover more advanced topics such as test coverage strategy and avoiding test brittleness, which is one of the biggest challenges when doing end-to-end testing via the browser. I find the two toughest areas of using Selenium to be selecting elements and adjusting wait times. The book provides some basic guidelines, but anyone who writes tests using Selenium is going to get some grey hairs from struggling with getting tests to run properly.

Some of the issues I noticed due to technology changes over the past three years:

The first two issues prevent the very first example in the book from working, which might be very frustrating for a beginner.

Because of the issues, I can’t really recommend this book to beginners, unless they have someone else around to help them through the rough spots. Hopefully Unmesh Gundecha or another co-author will have the time to do a new edition at some point.