We’re now done (I hope) with the college admissions process in my nuclear family, with my youngest daughter having committed to the university she will be attending next year. The whole process has changed dramatically in a generation, inducing much anxiety in kids these days, and I feel bad for them. Today, unfortunately, applicants really need to apply some game theory to the process.

Back in my day it was much simpler, and my own case was the simplest of all. We were told to apply to three schools: an aspirational school (your top choice), a mid-level school that you felt you had a decent chance of getting into, and your safety school, a third choice that you were all but guaranteed to get into.

When I was considering colleges, my criteria were: 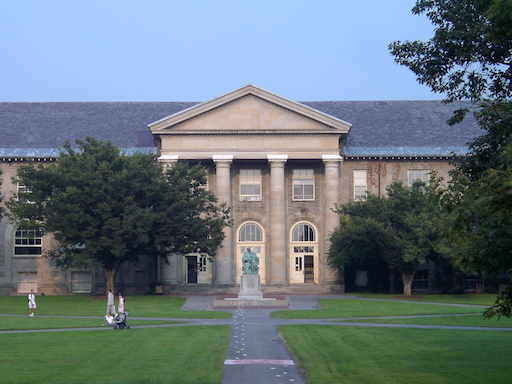 Growing up in the Schenectady area of upstate New York, Cornell fit the bill. Ithaca was about a four hour drive away (in good weather) via some beautiful but remote country roads. It’s an Ivy League school with a strong humanities program, yet unlike the other Ivies, Cornell has always been a pioneer in Engineering programs and other practical degree programs. They even have an Ag school, as Cornell is also New York State’s land grant university. By the way the Ag school and the Hotel school mean that the food Cornell serves in the dining halls is some of the tastiest (best ingredients and preparation) at any university in the country. This fact later helped me convince a very smart person a year behind me in my high school to also choose Cornell, after he sampled the food at Cornell in comparison to other schools he was considering.

I took one day trip to Cornell with my dad, walked around the campus and college town, liked what I saw, and made Cornell my top choice. I learned they had an early admissions process, so later that fall I filled out my Cornell application and did my interview with an alum. (Note: I caught a lucky break with my interview. Back then every Cornell applicant was supposed to be interviewed by an alum of the school the applicant was applying to, but the Engineering alum in my area wasn’t available, so I was interviewed by an Arts & Sciences alum who was terribly impressed that I knew about those newfangled computers and was already working as a programmer after school.) I also took the SAT once, without a prep course, because we were told there was no way to effectively study for the exact questions that would be on the test, although I did do some practice tests in a big book of old SAT tests. So I did one day trip, one application, one SAT test, one interview, and got accepted at my first choice. I was done before Christmas, and got to enjoy the second half of my senior year, worry-free. I never even had to come up with a second or third choice of schools. I literally don’t know what I would have done, as Cornell was really the only school I was seriously considering.

I do not recommend this strategy to kids these days, alas. The stress and anxiety levels are much higher, and the raw numbers have changed, which makes it tougher on kids. Simple game theory is the right strategy.

Of course it is also to the advantage of every other applicant to do the same thing and apply to many schools. The number of applicants for the same number of incoming freshman slots increases, which depresses the odds of getting accepted at any one school and further increases the need for applicants to apply to many schools. It’s a classic vicious cycle. There’s no easy way out of it, barring a coordinated movement to limit the number of applications that prospective students file.

I see the impact of this in many of the Cornell applicants that I speak with now that I am one of those Cornell alumni meeting with applicants during the admissions process (this is not officially called an interview any more). Kids can’t afford to be as focused on just one school any more. I can often tell that many of them are applying to a large number of other top-notch schools. The ability of kids to choose their college has been reduced because of the game being played. After seeing some of the kids I met with get into Cornell, and a much larger percentage not, I can’t draw any conclusions as to what criteria the admissions office is using (granted, I do not have access to the applications). For the most part it does appear as though it is a roll of the dice.

This is also to the detriment of the schools. Yes, those with the most applicants for their available slots get to brag about how selective they are. However a school should actually want to accept applicants who really want to go to that school, not just applicants who want to go to any top-ranked school and will take whatever one accepts them. But it is the kids that I feel for the most. They have to spend much more time and money on applications, tests, campus trips, and interviews, and in the end, the decision of where they go is less under their own control.