Chicago: at the center of it all (well, at least the U.S.)

tl;dr: Being positioned (nearly) in the middle has many advantages...

As Jeff Bezos mulls over the location of Amazon’s second headquarters (prediction: he won’t choose Chicago, as I’ll explain in next week’s post), I thought I’d go on record with what I see as the major advantages of doing business in Chicago.

Chicago, many people are surprised to learn, is a relatively young city, as it was incorporated in 1837. It was a boom city in the 19th century with the rise of railroad transportation, which gives a clue to one of the sources of its rise to prominence: geography. It is close to, but not in, the geographic center of the contiguous United States, a.k.a. the Lower 48 states. Even more importantly, with the U.S. population still weighted towards the east coast, it is even closer to the mean and median centers of population for the U.S. If one includes Canada in the population calculation, these center points would shift even closer to Chicago. What this means is that if you want to be located in a place where it is easy to travel to see any person in the U.S. and Canada, Chicago is a great location.

Another geographical fact: the Great Lakes form a barrier to continental east-west overland routes, blocking everything north of Chicago up into Canada. All these northern overland routes, whether they be railroads or interstate highways, instead must go around the southern tip of Lake Michigan, which is where (surprise) Chicago is located. U.S. east-west interstate highways 80 through 94 all funnel through Chicago; the railroad system does the same. 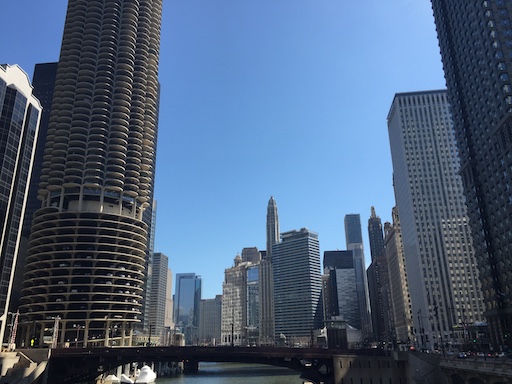 A small portion of the Chicago River, surrounded by skyscrapers

Thus Chicago is a natural hub due to geography. It started as a railroad hub. When the U.S. government built the interstate highway system, it became a highway hub. When air travel started growing, it became an airline hub, first with Midway airport, then O’Hare. When the early Internet was architected, Chicago became a major hub for U.S. Internet traffic as the only non-coastal of the original four Network Access Points in the Internet backbone.

Air travel is especially important to businesses. Even though the Internet makes it easy to communicate, face-to-face meetings still are more impactful. Between Midway and O’Hare, Chicago has the best air service in the country, with the most non-stop destinations and the most flights. Atlanta’s airport likes to claim the title of the world’s busiest, but that’s only if you measure it against O’Hare alone and exclude Midway. Chicago has three major airline hubs: United and American at O’Hare, and Southwest at Midway. It’s usually a two-hour flight to an east coast city and a four-hour flight to a west coast city, making it possible to do a day trip to any major city in the United States. Yes, I’ve done west coast day trips, although it is a bit of a long day: catch a 6am flight and you can be in a west coast office a bit after 9am local time, work nearly a full day, and then catch a non-red-eye flight back leaving at 5pm Pacific time that will get you home in Chicago around midnight. You can’t do that when you are located on either coast, as it is six hours to fly to the opposite coast, times two.

As a result, Chicago is a great location for corporate headquarters, national sales offices, and senior salespeople whose territory is the whole United States as well as international (you can fly to multiple destinations in Europe and Asia non-stop from O’Hare, including India). I personally know several top-level salespeople based in Chicagoland who have worked for multiple companies over the course of their careers and who have never had to move, because their Chicago location makes it easy to travel anywhere.

These advantages accrue to any sort of business in any sort of industry, which leads to another strength of Chicago: economic diversity. Chicago is not dominated by any particular industry; its economy is more diverse than any other U.S. city. When I first moved to the area, I recall reading a survey from the U.S. Department of Labor which ranked metropolitan areas by employment figures in 17 broad top-level industry categories such as finance, technology, healthcare, etc. Chicago was the only metropolitan area to make the top five in a majority of the categories (I forget the exact number). Even today it is hard to say what industry is most dominant in Chicago, whereas in San Francisco it is technology, in New York City it is finance, in Los Angeles it is entertainment, in Houston it is energy, and in Washington D.C. it is government. The fortunes of Chicago do not rise and fall with the fortunes of any one industry. As the country goes, more or less, so goes Chicago. It is not a boom-or-bust single-industry city. One side effect this has is that Chicago housing prices are less volatile than other cities.

As the largest city in the Midwest, Chicago is a natural draw for college graduates throughout the region, especially the large Big Ten universities. Yes, some graduates from the University of Wisconsin will stay in Wisconsin, but many of them head to Chicago to start their careers; the same applies to Purdue, Michigan, Michigan State, Iowa, etc. The University of Illinois is a pioneer in computer science and Internet technology, and claims to graduate more CS majors than any other university. Plus there are two world-class universities within greater Chicago itself: Northwestern and the University of Chicago. Companies in Chicago can easily draw on talent from all these universities, plus many others.

One other geographic advantage that Chicago has, for businesses, is that there is no beautiful natural geography here. Chicago’s raison d’etre is to be a place of business. No one moves here for the weather, or the beaches, or the mountains. For the most part, people are here to work, and for family reasons. That’s the reason I’ve always appreciated one of Chicago’s many nicknames, “the city that works”. It’s a great city with a great downtown area, second only to Manhattan in New York City (hence the “Second City” nickname), and the politicians haven’t killed that off yet. It is still easier to build a major new building in Chicago than most other major U.S. cities: the city even let Donald Trump put up a 92-story building recently. The city is much more impressive than anything California has to offer, and yet it lags Los Angeles in population. A lot of that is due to weather; as a board member who recruited me to the area said, “if Chicago had California’s weather we’d have twice as many people here”.

If you can tolerate a little cold weather, and I certainly can, Chicago is a great city for business.