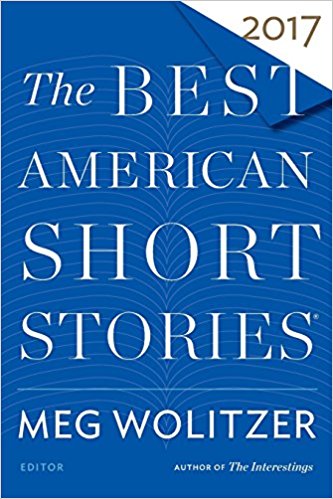 I’ve not read any of Meg Wolitzer’s books, although since she’s had at least one story in a previous volume of The Best American Short Stories I must have read at least one of her works. So I don’t know too much about her. After reading the stories she chose for The Best American Short Stories 2017, I can glean that she likes stories about dating, relationships, and amorous encounters, written from first-person perspective of a modern-day female. This is not unusual; I too like stories about people similar to myself, although it means that I am not necessarily the target audience for a good portion of the stories included in this volume. Still, it was interesting to read about what these encounters are like, from the perspective of the opposite sex.

The stories in this collection which I enjoyed the most are:

“Are We Not Men?”, by T.C. Boyle: maybe this appealed to me because it is written from the male perspective, although is it not as “manly” a story as it may appear to be from the title. I do feel that this is without a doubt the most inventive, creative story in the collection, as well as being well-written with a taut storyline. It takes place in the near future and there is an element of science fiction to it, as genetic engineering has become widespread. But it is much more a story of how these advanced technologies might impact society and interpersonal relationships. Like other well-written science fiction, it raises some challenging questions about the direction our technology-driven world is heading.

“Maidencane”, by Chad B. Anderson: this is another story from the male perspective, although the protagonist has both a girlfriend and a boyfriend. It is a story about a broken family and how the breakup has major impact decades later on the people involved. Interestingly, it is also a story about people’s memories: how memory is imperfect, and how tiny details remembered years later by one person may be completely forgotten or contradicted by some other participant in an event. The observations on memory ring true to me; we all need to be reminded that memory is not perfect.

Other stories that I enjoyed nearly as much were Kevin Canty’s “God’s Work”, Mary Gordon’s “Ugly”, and Lauren Groff’s “The Midnight Zone”.

The Best American Short Stories 2017 is most likely to appeal to fans of Meg Wolitzer’s writing. Others seeking a more general volume of the best short stories of 2017 are advised to check out The O. Henry Prize Stories 2017.