tl;dr: Enjoyable overview of the politics, fundraising, and (mostly) science behind the fight against polio...

I do enjoy a good history book, especially a history of science book. David M. Oshinsky's Polio: An American Story can almost be classified as a history of science book, as the majority of it does cover the history of the disease, the rise in outbreaks in the early twentieth century, and the various approaches taken to understand, treat, prevent, and eradicate the disease. The scientists involved, notable the developers of the two primary vaccines (Jonas Salk and Albert Sabin), receive considerable coverage. But because polio had widespread public attention, affecting President Franklin Delano Roosevelt most prominently, and because the fight against it was primarily funded by an innovative grass roots organization popularly known as the March of Dimes, Oshinsky aims his scope broader than just the science of the fight against polio. 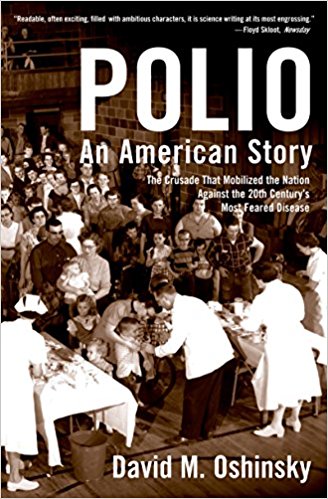 The result is an enjoyable book which summarizes the battle against polio, including the inside perspective of the scientists and fundraisers battling the disease directly as well as the perspective of those affected by the disease and the perceptions of the general public. Oshinsky’s descriptions of the various theories and advances made by scientists to figure out the behavior of the virus and how to counter it interested me greatly even though biology is not my favorite science. I don’t like all the memorization and imprecision in biology; I prefer instead physics, where almost everything can be derived from first principles. As a non-biologist I was intrigued to see how the scientists were able to detect and characterize the polio virus in the days before microscopes were powerful enough to see it. They truly were battling an unseen enemy.

The Salk and Sabin vaccines are triumphs for the scientific method as well as statistical analysis. Yet this all took place within the context of a massive public fundraising campaign run by powerful individuals who battled with many of the scientists over how best to fight the disease. Polio: An American Story dives into the major personalities involved, especially those of Salk and Sabin, who had very different technical approaches, working styles, and reputations both within and outside of the scientific community. The book also shows what can happen when a scientist clings too long to a theory that is counteracted by the evidence, and the damage that can result.

Unlike some history books, which can be a slow slog, Polio: An American Story is eminently readable; it is not a purely academic tome written by an academic for other academics. Based on the footnotes it appears Oshinsky researched his topic thoroughly. There are interviews with some of the survivors of the era, and he cites many primary and secondary sources. I actually wish the book was longer, to allow Oshinsky to go into more depth across all of the topics and timeframes that he covers. The book won the 2006 Pulitzer Prize for history; I’m not sure I would be quite that effusive in my praise. For anyone interested in an overview of the battle against polio in twentieth century America, Polio: An American Story is a recommended place to start.