tl;dr: It’s where the (risk capital) money is and money does not like to hop on planes...

Time to start busting some of the myths about Silicon Valley, starting with why it exists in the first place.

Is it because of great universities such as Stanford and UCal-Berkeley? They definitely help, but there are top-notch research universities in other cities: MIT and Harvard in greater Boston, Cornell in the middle of nowhere in upstate New York, UChicago and Northwestern in Chicagoland, etc. Is it because of some laws that California has passed? If so, those laws would apply to the entire state, and aside from the law declaring non-compete agreements unenforceable, California is actually a bad state in which to conduct business: taxes are high, the cost of labor and real estate is among the highest in the nation, and the state has regulators and agencies that are nearly as powerful as those at the federal level. Is it because of something in the air, water, or food supply that causes everyone in the San Francisco Bay area to be so much smarter than everyone else? Nonsense.

I learned this lesson early in life. My father was a cofounder of a venture capital-backed startup company in the 1970s, in the very early days of the venture capital industry. Someday I’ll blog more about this but I will relate a relevant story my dad told me long ago. One of the investors in my father’s startup was Sequoia Capital, one of the oldest and still best known venture firms in Silicon Valley. Don Valentine was the Sequoia partner who had a board seat on my father’s company.

My father’s company was not anywhere near Silicon Valley: it was in upstate New York in a town nearby Albany, three time zones away from California. Startups tend to hold frequent board meetings, and Don Valentine used to travel all the way from California to the Albany area for board meetings. Needless to say there were no direct flights back then and there probably aren’t now. Traveling from California to Albany was/is an all-day affair in the best case, and can take longer than a day if a flight is cancelled. After one particularly brutal trip to Albany during the winter, Don Valentine told my dad that he was never again going to invest in a company outside of California. By the way, that startup was eventually acquired by a California-based company.

VCs watch over their investments, so they prefer them to be close by, ideally within a short drive. They develop networks of other investors and executive talent, and try to apply their networks to the benefit of their portfolio companies. Because so much networking is still done face-to-face, a VC’s network will be centered where the VC is geographically located.

The presence of investors and venture capital firms in Silicon Valley is what draws (or forces, in some cases), entrepreneurs and talent to the area. I worked for another startup company, Copper Mountain Networks, that was founded in San Diego. When the company obtained venture capital investment, the investors had the company open a new executive team headquarters office in Palo Alto. Supposedly this was to be able to attract the best management talent, and it did indeed help, but it also meant that the VCs could keep close tabs on the company. 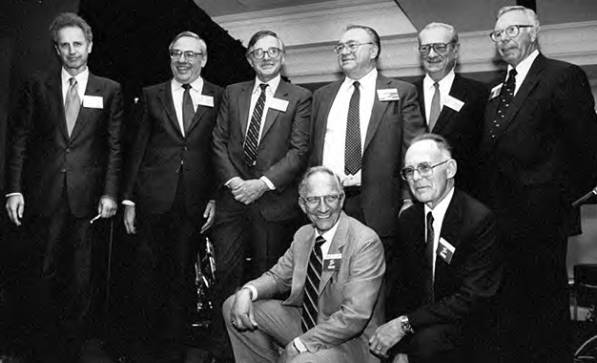 The Fairchild founders, including Gordon Moore and Eugene Kleiner of KPCB, meeting at Rickey's in 1988 (details)

Which leads to the question: why is that venture money there in the first place? For that answer I think you need to go back to the founding of Fairchild Semiconductor and Intel, back when a few pioneers in Silicon Valley started manufacturing silicon-based transistors and integrated circuits. There are some personal reasons why those pioneers were out in California, and they had a desire to do their innovative work far from the oversight of staid East coast corporate bosses.

Venture financing is much riskier than a traditional bank loan. Early-stage companies typically lose money and hence look like a bad investment to traditional financiers. Even today I haven’t bought and wouldn’t buy any Snapchat stock, because it is losing so much money, yet it made billions of dollars for the early investors. The venture capital investment model perhaps needed to be pioneered far from the country’s top financial center, New York City, because it is so different from traditional bank financing. Then, once there were a few venture success stories, the model proved itself, got further refined, attracted more capital, and some of the profits were reinvested. It is quite common for founders of successful companies to become VCs or to give a chunk of their fortune to VC firms for them to reinvest. It became a positive feedback loop, and propelled Silicon Valley to the prominence that it still holds today. But that VC money wants entrepreneurs to travel to it, not the other way around.