tl;dr: The Python community knows how to throw a great conference...

I don’t consider myself an involved member of the Python community, not at present. The startup I work for, Uprising Technology, uses Python extensively in the back end of our primary enterprise-class Cloud SaaS web application, and we are starting to get more heavily into data analysis and data science, where Python is also a great language choice. Since the Python Software Foundation chose Cleveland as the location for the 2018 (and 2019) Pycon conferences, I made the short journey there to pick up on the latest advances in Python-based software technology and hopefully learn a few things.

Unfortunately we’re so busy at work that I had to miss the first day of the conference, and even during the two days I attended I was busy writing some (of course) Python code. If I had needed help, however, there were plenty of Pythonistas around me, as the conference attracts many of the main contributors, authors, and other luminaries in the Python community, including language inventor and Benevolent Dictator for Life Guido van Rossum. 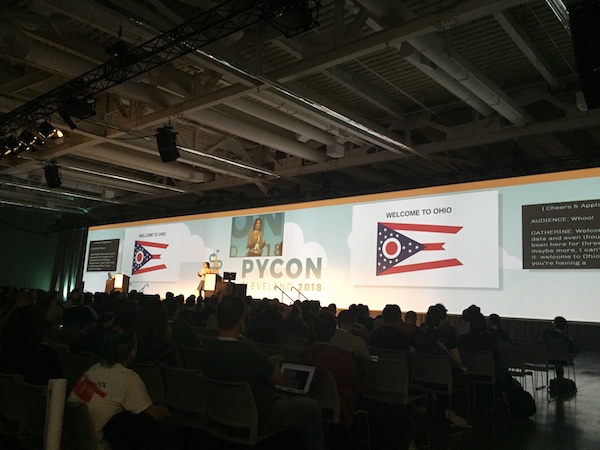 Python, more so than most other languages, is very much an open sourced language and ecosystem that is not controlled or driven by any one company. It’s the primary language at successful web-focused startups such as YouTube and Instagram, and is used extensively at Dropbox (Guido’s current employer), Google, and many others. Python relies almost entirely upon the voluntary contributions of members of the Python community to advance the language and develop the many open source libraries that make Python such as powerful and productive programming ecosystem. Pycon is where many of these contributors meet face-to-face, to discuss future plans, gather inspiration from each other, and do hands-on development during developer sprints which take place after the three days of conference presentations.

Pycon was bigger than I was expecting, although given the growing popularity of the language I shouldn’t have been surprised. The largest room used for the keynote addresses could accommodate a few thousand people, with large video displays dispersed around to assist viewers who were far from the stage. During the three presentation days there were usually five talks happening simultaneously, along with a vendor area, impromptu open meet-ups on a wide variety of topics, and lots of hallway and dining area discussions.

I was especially impressed with the professionalism of Pycon, even though it is run almost entirely by volunteers. Conference talks were captioned in real-time by amazingly accurate stenographers. All the conference talks and keynote addresses were captured in high-quality audio and video and posted to YouTube within 24 hours. The food was better than the average convention center fare, and it was built into the cost of admission. Rooms were available to host meetings among attendees. There was a friendly, welcoming attitude among the staff and attendees, and the speaker list was more diverse than one sees at most technology conferences.

Pycon provided me some additional validation of the various technology choices we’ve made at Uprising, and some glimpses into the future. Dynamic typing is one of the key aspects of Python that makes it so easy and fast to develop new functionality, especially in web development and when interfacing to other systems where type information isn’t always known or may change. Yet in large Python based projects such as those at Docker and Instagram, where code is shared among teams of hundreds of developers, Python’s new optional typing features can make sense and deliver benefits, so it was good to hear stories from larger Python projects. I also enjoyed learning more about the current state of the Beeware project. The Beeware team is attempting to make it easy to use Python to develop and deliver cross-platform GUI applications. It’s all terribly ambitious, but if the team can actually achieve the stated goals, Python’s popularity will grow even further.

Since all the talks are available online, the main benefit of going to Pycon is the opportunity to interact with other Python enthusiasts. I enjoy the opportunity to talk with people whose books I’ve read, whose blog posts I’ve read, and whose interviews I’ve listened to, as well as other not-so-famous Pythonistas who can share their experiences with various technologies. There’s also the opportunity for some fun. I spoke with Python book author and open source contributor David Beazely not about his talk on the challenges of compiler parsing, but rather on cold-weather bicycling.

A tip of the cap to the Python Software Foundation and all the volunteers for throwing a great Pycon 2018. They can feel good about the state of the language and the community around it.