Book review: The Race Beat: The Press, the Civil Rights Struggle, and the Awakening of a Nation, by Gene Roberts and Hank Klibanoff

tl;dr: A gripping narrative of the pre-1966 civil rights movement through the lens of journalism...

The Race Beat, which won the Pulitzer Prize for history in 2007, is a prime example of why I enjoy reading well-written history books. A history book should be much more than a dry regurgitation of names, dates, and facts. The best history books maintain their objectivity and factual correctness while telling a story that engages the reader and keeps him/her eagerly turning the pages. Most history books cover events of high passion (certainly the civil rights movement falls into this category), and they should ideally transport the reader back in time to those moments to understand the emotions as well as the actions of the participants.

The Race Beat is a page-turner of a history book; I was as much under its spell as any John Grisham book I’ve read (to cite another author who often writes about the southern United States). The authors Gene Roberts and Hank Klibanoff, as journalists themselves, understand the importance of telling a good story. They present a series of compelling narratives as they follow the civil rights movement from its early days through the major conflicts and datelines such as the Emmett Till trial, Little Rock, and Selma (to cite just a few). With the benefit of hindsight, they are able to objectively present the events by using the words of the participants at the time, which often appear ludicrous by today’s standards. There are many examples, but my favorite headline that didn't age well is from The Clarion-Ledger in Jackson, Mississippi after Martin Luther King Jr.’s “I have a dream" speech: “Washington Is Clean Again with Negro Trash Removed”. 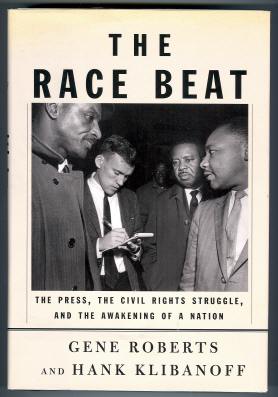 The Race Beat covers the major events of the civil rights movement, up to the Voting Rights Act of 1965, with a focus upon the journalists covering the events of the time, the journalism they produced, and the impact that journalism had on swaying public opinion and driving politicians to finally take action. Because of that perspective, it is not an all-encompassing history of the civil rights movement itself. The primary focus is on print journalism, which has the obvious benefit for historians of having archives available to read the coverage of events while they were happening. Television journalism started having a major public impact during that timeframe, but many of the accounts of the coverage of the time are presented via written and oral remembrances, probably due to lack of exhaustive archived footage.

If one is looking for evidence of the power of the mainstream media and, in particular, The New York Times, The Race Beat provides plenty. From the perspective of the highly polarized political environment of 2018, and the many accusations of news bias, it's hard not to look back at the events described in The Race Beat as being a golden era of mainstream media journalism. The Race Beat also provided me a much better understanding of what is actually happening at public demonstrations, and the interplay between the media and the event orchestrators.

The only major criticism I can level at The Race Beat is one of project scope: it basically ends after the Voting Rights Act of 1965 is passed. The final chapter functions as an epilogue; it mentions Martin Luther King’s move to Chicago and his assassination, the race riots across the U.S., and the schism of the civil rights movement as certain factions embraced violence while King and others remained advocates of non-violent protest. However, to cover the latter stages of the civil rights movement to the same level of depth would require another volume even greater in length.

It’s fair to say that The Race Beat, with its focus on journalism, its many mentions of other Pulitzer Prize winners, and the positive light in which it presents those journalists who battled entrenched forces to accurately cover the civil rights movement, was well-positioned itself to win a Pulitzer Prize. It is, in my opinion, deserving of that honor.