I was fortunate to be born into the Information Age with a strong affinity for all things digital, when computers were the technology most transforming society and the economy. Many say that the next revolutionary technology is genetic engineering, which deals with a branch of science, namely biology, that has never much appealed to me. My last biology class was AP Biology in high school, which I took because it was one of the only three Advanced Placement (AP) classes offered; I also took the other two, Calculus and English. I aced the exam, but because biology was far afield from physics, electronics, and computer science, I never took another class in the subject.

So if genetic engineering is the next dominant technology, I will be left behind, clinging to my MacBook and Raspberry Pi, and firing up my text editor to write some code. Or, in the best case, I will escape my physical body into infosphere/web/net, becoming one of millions or billions of disembodied intelligences, in which case the life cycle and biology of carbon-based lifeforms becomes irrelevant.

Nevertheless I am amazed at the advances in gene sequencing, gene splicing, and gene editing. I recall the uproar when Dolly the sheep was cloned. Not knowing the particulars of the technologies involved, I have some of the same fears about genetic engineering that others, who are not familiar with computers, have about machine learning and artificial intelligence. Having seen how often things go wrong in all areas of technology, and how hard it is to design truly failsafe systems, it does seem highly plausible that there could be many unintended consequences from altering the very instructions which define lifeforms. 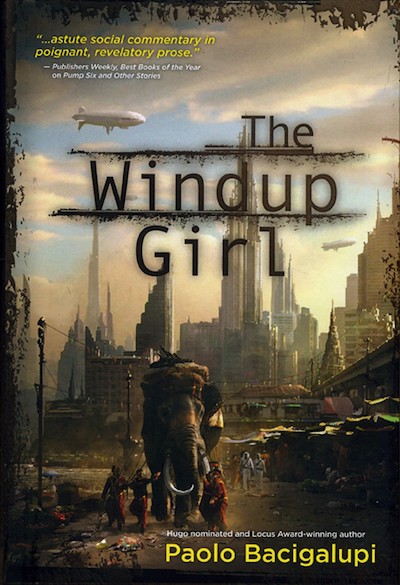 It is these fears that Paolo Bacigalupi preys upon in The Windup Girl, winner of the Hugo Award in 2010 and the Nebula Award in 2009. In the future world envisioned by Bacigalupi, climate change and genetic engineering have already transformed the world for the worse, blighting the planet with ravaging plant and human diseases that can often only be countered by further genetic engineering from the Monsanto-like “calorie companies” who produce most of the world's food and seed. The city of Bangkok, Thailand, below sea level and protected by a fragile system of dikes and pumps, fights a desperate battle against the calorie companies by practicing, for the most part, a policy of isolation from the rest of the world. Worldwide economic output has collapsed, so many of the technologies in use have reverted to their more primitive human- and animal-powered predecessors.

Events unfold from there, and I won’t give them away any further. The Windup Girl is science fiction but the quality of Bacigalupi’s writing is significantly above the stereotype many have of pulp science fiction. His descriptions are rich in detail, and his observations of politics, at the geopolitical level as well as the group and personal levels, ring true. The plot is engaging, and the message it delivers at the very close wonderfully encapsulates the appeal of genetic engineering and its promise to improve life, even to those who have experienced its downside.

I recommend The Windup Girl, although it doesn’t make my all-time favorite list of science fiction books. Be aware that, in certain scenes, the language is explicit. So don’t do what I did, which is to start playing the audiobook version of the novel while embarking on a long drive with my teenage daughter 😉.