As I give up my Chicago White Sox partial season tickets due to my move to Arizona, I thought I’d explain why I got these particular seats, and in the process explain where to sit at a baseball game. Whoever ends up with these seats next year is going to be very happy with them.

The seats are called “Premium Upper Box” seats, but in plain English they are in the upper deck at Sox Park (a.k.a. Guaranteed Rate Field, formerly U.S. Cellular Field or New Comiskey): Section 527, Row 3, Seats 15 and 16. If you extend the left field foul line from the foul pole all the way past home plate and continue into the stands, the seats are almost directly on that line. 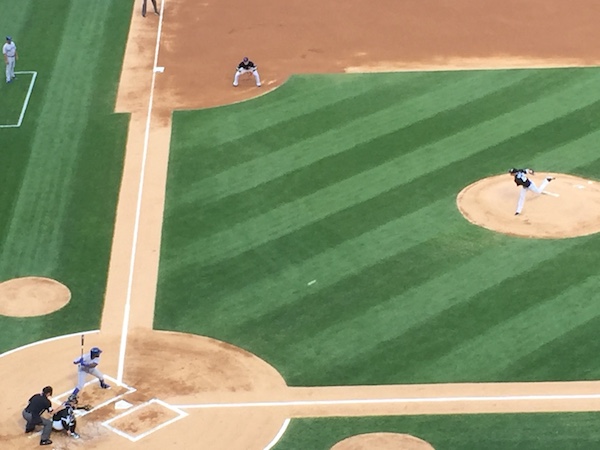 The view from 527, with Chris Sale on the mound

Where to sit at a ballpark is driven by two fundamental observations:

The first observation should be self-evident. The second observation, however, runs counter to the fact that the priciest seats in the stadium are almost always those in the first few rows closest to the field. There are indeed season ticket holders who attend many games themselves who prefer these seats, Marlins Man among them, although many of them are resold or distributed among companies or large groups of people.

Yet if you’ve ever sat in front row seats at a ballgame, as I have, you’ll realize that the front row is the best place to sit if you want to see what the players look like, but it is not the best place to sit if you want to see what is happening on the field when a ball is put in play. To better see how the defense is set up, to see where the ball was hit and how hard, and to see how the out is made, you need to be higher up, to be able to look down upon the field. This applies in many sports besides baseball. It’s the reason why American football head coaches roam the sidelines, so that they can bark orders to their players, but they are on headsets to assistant coaches upstairs with a better view of the field, who can better see how the plays are unfolding.

If you accept these two observations, the next question becomes where does most of the action take place on a baseball field? Every play starts with the pitcher on the pitching mound throwing to the hitter at home plate. The number one place where the most outs are made on the field is at first base, and every hitter runs to first base after putting the ball in play. Fewer runners make it to second and third base. The most important base runners, and base running plays, are those that reach home plate. Outs and hits in the outfield are widely scattered. So, I posit, the center of the action in a baseball game is a spot somewhere in the triangle formed by the pitching mound, home plate, and first base. You want to be as close to that spot as possible, yet somewhat elevated.

One side of that triangle is the base path from home plate to first base, which is just 90 feet long. Stadium seats are usually around 22 inches wide - let’s call it 2 feet to include some space for the aisle every 20 seats or so. That means there are only 45 seats in between home plate and first base, times the number of rows in the stadium. Sox Park has approximately 37 rows in the lower deck, 5 at club level, and 21 rows in the upper deck: 45 x (37 + 5 + 21) = 2,835 seats which are along the baseline from home plate to first base. For the best view of the most action, you want to be in this set of 2,835 seats. 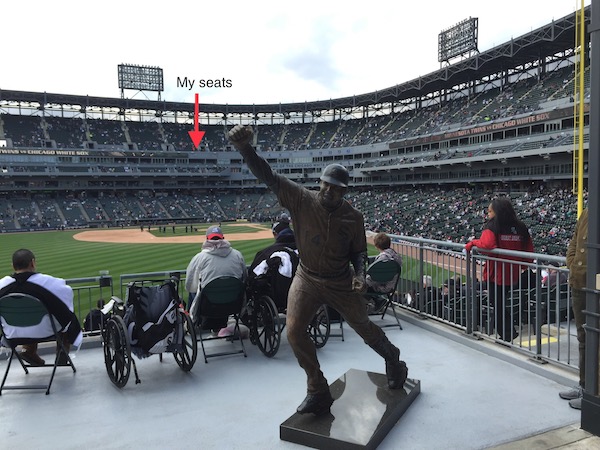 If what I just said is true, then you may ask why it is that professional scouts, who are paid to watch baseball games, sit behind home plate several rows up? Scouts are primarily watching the pitcher and the hitter, and want to see the movement on the pitches. They don’t care that much about what happens out in the field after the ball is put in play. Scouts aren’t fans, and aren’t interested in seeing any particular outcome of the game. Being behind the hitter several rows up, so that their view of pitches is not blocked by the hitter, catcher, and umpire, is ideal for scouts.

My absolute favorite seats at Sox Park are the club level seats along the first base line between home and first base, and that is where I would buy season tickets if they were available and I could afford them. However, if you are willing to elevate yourself another 20 feet or so higher, you can sit in the first rows of the upper deck for around one third the price of club seats. That’s exactly where my seats are. In fact I am much closer to the center of the action than most club level seats, as club level at Sox Park extends way down the right field and left field lines, including out past the foul pole in left.

I first bought my partial season tickets for the 2008 season, after the White Sox came off a very disappointing 2007 campaign. They won the World Series in 2005, attendance peaked in 2006 when the team won 90 games, but 2007 was such a letdown that many bandwagon fans gave up their seats. I knew there might be a lot of seat turnover that year, so I called the White Sox ticket office and gave them my wish list: 2 upper deck seats in the first few rows, in between home plate and first base, on the aisle (for easy access), close to the bathrooms and concessions. That’s exactly what Sec 527 Row 3 Seats 15 and 16 are. They are so close to the bathrooms and a beer and pretzel stand that I’ve often been able to, as the teams are changing sides, visit the bathroom and buy a beer and make it back to my seat before the first pitch of the next half inning. Try doing that at Wrigley 😉

Section 527 Row 3 Seats 15 & 16 will be available soon, for the first time in eleven years. Get them before they are gone.