tl;dr: AWS is the new Windows and MacOS, and AWS re:Invent is the new Microsoft PDC and Apple WWDC...

I was fortunate to be able to attend AWS re:Invent 2018 in Las Vegas. My general impressions of the event, as a first-time attendee:

AWS CEO Andy Jassy’s keynote address impressed me with his knowledge of the breadth of AWS’s offerings. Jassy actually covered more ground than did Amazon CTO Werner Vogels the following day: Vogels skipped over machine learning and artificial intelligence, which is the realm of AWS GM Deep Learning & AI Matt Wood. Besides trumpeting new service offerings, much of Jassy’s address was devoted to convincing CIOs that AWS is the safest choice for migrating to the cloud, highlighting recent AWS customer success stories, and bashing Oracle, which deserves to be bashed. One of my all-time favorite software industry quotes is: “Oracle doesn’t have customers, they have prisoners.” 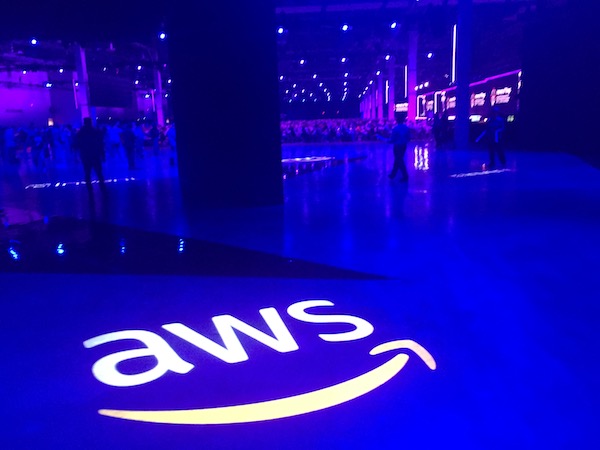 The room at the Sands Expo used for AWS re:Invent keynotes is rather large...

AWS is clearly aiming at Oracle’s heart by attempting to capture more of the world’s databases and data. It’s been a while since I’ve examined Oracle’s offerings (their core technology is a decades-old SQL database), but AWS is differentiating themselves by being technology-agnostic and supporting a broad range of database technologies. There are multiple AWS options for SQL databases, document databases, a graph database, plus a time-series database that they launched at the show for streaming data from IoT devices, and now two options for blockchain distributed ledger databases. Then, of course, there is AWS’s hugely popular S3 storage service for storing objects, which can be almost anything. I’ve always believed in the right database tool for the job, rather than trying to cram everything into a SQL database just because so many people know SQL, so I think AWS has the right strategy. Larry Ellison should be worried.

Aside from the keynotes I was on the developer track, not the CIO track, so I went to technical talks on various aspects of AWS services of interest to me in my job at meltmedia. The top-level impressions those talks gave me is that AWS can be though of as a proprietary cloud operating system (OS), and at re:Invent, AWS is trying to get developers to write as many applications using as many AWS services as possible, hopefully for mutual benefit. Many of the AWS services are small enough in scale (i.e. granular) to resemble the operating system calls of days gone by, and the interface to them can be through an API. In that sense AWS is the present-day OS of choice, similar to the way that developers used to write applications for Windows or MacOS years ago. That makes AWS re:Invent the modern-day equivalent of the 1990s Microsoft Professional Developers Conferences and Apple’s Worldwide Developers Conference. I wouldn’t have been surprised if Jassy or Vogels had broken out into a Steve Ballmer-like chant about "developers, developers, developers".

AWS continues to make a major push into serverless computing, a.k.a. Functions as a Service (FaaS), with further enhancements to AWS Lambdas including more language options and more AWS services that can be connected to them. In almost all cases Lambdas do need to be hooked up to multiple other AWS services to deliver useful functionality and to build something that can legitimately be called an application. While they definitely have major benefits by offloading operations and infrastructure work onto AWS, they also are the cloud compute service that most locks a customer to the AWS platform. As long as AWS has fair pricing and a world-class platform, this is fine. 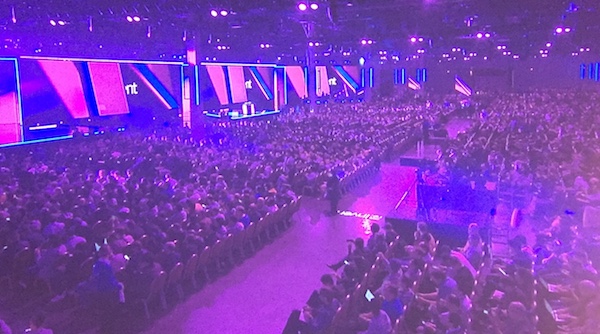 ...but not large enough to hold everyone for Andy Jassy's keynote address

In the cloud compute realm AWS is following a similar strategy as databases, by having the broadest possible range of offerings. Besides Lambdas, there are three different compute services to run Docker containers: a base container service called ECS, a managed Kubernetes offering called EKS to catch up with Google’s GKE, and Fargate, a Lambda-like service for containers that put the burden of launching and managing containers on AWS. In the hardware and bare metal server realm, AWS again broadened their EC2 server offerings and announced AWS Outposts, which is a way of running AWS on-premises by having Amazon ship racks of AWS servers to a customer’s data center. AWS is designing a machine learning chip called Inferentia which appears to be an answer to Google’s Tensor Processing Unit. In the few areas where AWS was behind they are working hard to catch up, and they are striving to have the broadest range of offerings of any cloud provider. It’s impressive.

Las Vegas is as insane as ever. I seem to travel there every few years, and each time I find that some massive new hotels and/or condos have been constructed since my last visit. The house’s slight edge at the casino tables, accrued over time, builds some pretty spectacular hotels, such as the Palazzo, although they haven’t yet torn down Circus Circus. I only gamble when the odds are in my favor, which they aren’t in Las Vegas, so I enjoy the city for its food an entertainment. The steak dinner I had at Delmonico Steakhouse topped any that I ate in my years in Chicago.

It boggles my mind that Las Vegas could host a convention of more than 50,000 people without having to use one square foot of the Las Vegas Convention Center, which is where I’ve gone for events such as CES and Interop. The convention facilities at the hotels used for the event, in particular the Sands Expo Center at the Venetian and the Aria, are themselves fairly huge.

The room used for meals at the Sands was by far the largest sit-down dining room I’ve ever eaten at in my life. I lived in Portland when the Oregon Convention Center had just opened, and it now seems tiny and a bit sad by comparison. Nothing about AWS re:Invent 2018 was tiny and sad; it was an inspiring gathering of technical people, all working on the world’s largest cloud computing platform.