tl;dr: The beer game helped me realize that the late-1990s dotcom/Internet/telecom bubble was going to burst...

Since I was in the Internet industry in the late 1990s, I am sometimes asked if I personally knew at the time that the industry was in a bubble, which finally started bursting in March, 2000. The answer is yes, although the bubble lasted longer than I thought it would, I didn’t do enough to prepare for the end of it, and I didn’t realize how severe the crash would be. One of several strong clues I had at the time was due to an online computer simulation game that I had played at the Harvard Business School (HBS) in the fall of 1997, called the beer game.

I had been fortunate enough to be chosen by my employer’s parent company, the since sold-off and merged ADC Telecommunications, as the one employee that year that they sent off to either Harvard or Stanford for a months-long business school executive education program. I chose Harvard primarily because it was only a three month program as opposed to nine months at Stanford, which I thought would be too much time away in academia. One evening that fall, at a preset time, all the eighty or so students in the program were directed to go to their dorm rooms and use their networked Macintosh computers to participate in the beer game.

The students were randomly grouped into teams of five, but we had no idea who our four teammates were. The point was to simulate a loosely-coupled supply chain, where exact information about what was happening could not be passed up the supply chain. Each person in the team ran a beer warehouse that fed into the next warehouse in the chain, except for the one person at the head of the supply chain, who ran the actual beer brewery. At each step of time in the game each person received one piece of information: the number of beer barrels ordered by the person receiving the beer downstream, which had to be delivered from in-stock inventory. Only the person at the end of the chain saw the actual end user retail demand. Each person then had a decision to make: how many beer barrels to order from the upstream supplier, which would be told to the upstream person and hopefully delivered at the start of the next step in time. Everyone started out with a certain amount of inventory, and was told one additional piece of information: the beer brand was going to start running an advertising campaign. This gave notice to everyone that demand was likely to increase.

The question then becomes: what is the best strategy to win the game, by always being able to meet demand while minimizing inventory?

I felt I knew the winning strategy. My employer made Internet access devices in its own factory, and I had seen the challenges we had forecasting demand. I had read The Machine That Changed The World about Toyota’s radical processes known as “lean manufacturing”, and knew about the Kanban card system of replenishing parts in a factory. I had also heard of the IT system that Walmart had put in place to, for example, order more boxes of Tide from Procter & Gamble based on exactly how many boxes had been sold at the checkout counters that day. So I felt the best strategy was basically no strategy at all: place an order at each step to replenish exactly the number of barrels you shipped that step. This would pass the actual end user demand up the chain. One other person in my small team of five unknown members followed the same strategy, and that was enough for our team to beat out all the other teams and win the beer game. My teammates and I each received a glass Harvard beer mug as a prize. 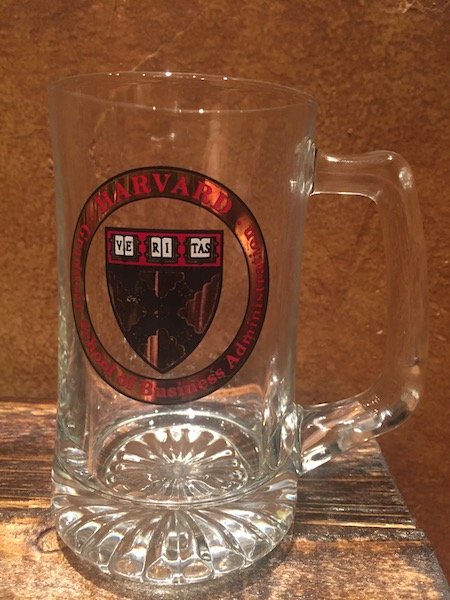 The mug I received for winning the beer game

The winning strategy, alas, runs counter to human intelligence and hubris, which is one reason why bubbles form. The human tendency, when you see demand jump from 5 barrels a week to 10 barrels a week, is to try to outsmart the process and get a little ahead of demand. So, instead of ordering 10 barrels you might order 12. The person upstream in the chain sees demand jump from 5 to 12, and decides to order 15. The next person upstream decides to order 20, etc., and the system rapidly gets way out of whack. After this initial surge builds up in the warehouses and is not being depleted by the actual end user demand, everyone has to drastically cut orders, often to zero. The poor factory ends up getting whipsawed, going from working at full speed, three shifts a day, to having to lay everyone off while the excess inventory in the supply chain is depleted. The resulting graph of the total amount of inventory in the system ends up looking like a lightly-damped harmonic oscillator.

When I got back to work in January of 1998, I saw many signs that the industry was in a bubble. The entire Internet supply chain was very loosely coupled, with many companies all collectively responsible for building out the Internet and all placing orders on each other: retail ISPs, fiber backbone carriers, equipment suppliers, and chip companies, all financed by venture capitalists operating at arms-length and a booming stock market decoupled from traditional financial metrics. Actual end user demand and bandwidth use was no doubt growing, but fiber networks were being built far faster than the capacity could be absorbed. Because demand within the supply chain was high, stories were rampant of customers placing double and even triple orders, hoping that when parts went on allocation, as they often did, they would receive the amount they actually wanted. It was a crazy time, and I kept thinking back to the beer game I had played.

The bubble did, of course, ultimately burst. Actual end user Internet demand continued to grow unimpeded, but the entire supply chain went through severe convulsions far worse than temporary factory shutdowns. Companies went out of business, employees lost their jobs, and investors lost huge amounts of money ultimately totaling well over a trillion dollars in lost market capitalization. The dominant router vendor Cisco Systems, for a time the most valuable company in the world and one which some thought would be the first trillion dollar company, lost over $400 billion in market cap alone. The stock of the company that had sent me to HBS plunged more than 90%.

Even though it was a pretty simple game, the beer game taught a valuable lesson about the importance of matching supply chains to true end user demand. With better IT systems in place now compared to twenty years ago, there is better visibility into the overall state of various supply chains. This may be one reason why recessions are less frequent now than in decades past. Supply chains are still not perfect, however, and there are other causes of bubbles besides supply chain forecasting problems, so bubbles can and will still happen.