tl;dr: I was in a dotcom-like startup ten years before the dotcom boom...

As mentioned in my startup story #2: Inmar, Inc., I took my small payout from that startup and moved west to Portland, Oregon, because I wanted to live there. I had experienced the city and the surrounding geography on a cross-country motorcycle trip after college, and I thought it would be a great place to live (it was). While looking for a job I turned down an opportunity at a small but fast-growing software company named Microsoft because it was located in a suburb of Seattle and I wanted to be in Portland; years later I realized that nearly everyone who joined Microsoft as a software developer in that timeframe became a multi-millionaire via stock options. I instead joined the hottest high tech startup company in the Portland area at that time, AT&E (technically, I worked for the R&D division: AT&E Laboratories, Inc.).

What made AT&E fairly unique in that late 1980s - early 1990s timeframe was its financing model. Even though I was just three years out of school I had already experienced a venture-financed startup and a bootstrapped startup. AT&E was a different breed: it was a public startup company with basically no revenue, financed by “Wall Street”: really, institutions and individual investors who every day priced the company’s stock on the open market and who occasionally bought large blocks of newly issued stock from the company. Those secondary offerings gave the company funds to continue operations, as it was losing millions of dollars a year. This financial model was nearly unheard of at the time but roughly a decade later it became commonplace during the dotcom boom, when much-hyped Internet-based startup companies with little to no revenue and huge losses went public and relied upon Wall Street to provide funding. The most infamous example of this model was pets.com, but they were far from the only one.

AT&E had gotten to that “public company with little revenue and huge losses” financial model through a slightly roundabout path. Years before I joined the company (so I was told by others) the company had developed and sold a line of PC-based Interactive Voice Response (IVR) systems which answered phone calls for businesses and presented callers with an automated menu of choices before routing the calls. The IVR business did well enough for the company to go public on the long-since-merged-out-of-existence American Stock Exchange, the typical home at the time for companies too small to make it onto the New York Stock Exchange or the upstart NASDAQ market.

While in this business some smart AT&E engineers dreamed up the idea of a wristwatch pager that would use an IVR as the very front end to accept pages and then distribute the pages via a packet-networked transmission system which broadcast them over FM subcarrier frequencies to a digital radio embedded in a wristwatch form factor. In effect this was a precursor to what is today an Internet-connected smartwatch, and is also why I am skeptical of these devices every achieving mass market ubiquity. AT&E decided to bet the farm on the wristwatch pager, entered into a partnership agreement with Seiko (technically, the Epson division of Seiko) for manufacturing the watch, and sold off the IVR product line, which reduced the company’s revenue to nearly zero while still maintaining the public stock listing. By the way the company’s name was a knockoff of AT&T, intended to project an image of towering strength rather than one of monopolistic sluggishness; as a younger person whose impression of AT&T tended towards the latter image, I felt the name was a bad choice. 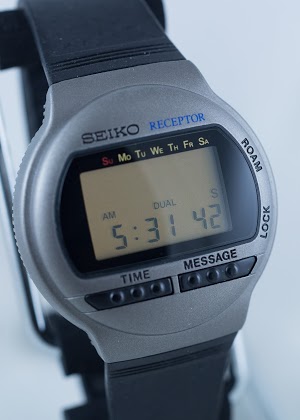 Like the Ford Model T, the first AT&E/Seiko watch came in any color you wanted as long as it was black

The technology inside the watch itself, the digital radio and packet processing, and the packet-based transmission network, was fascinating to me as an engineer, and very much leading-edge. There was no doubt it was the most exciting startup company in Portland at the time, with a certain glamour associated with it. I’m sure I’ll ultimately blog more about the technology, but in this post I’ll concentrate on what I learned about Wall Street-financed public startup companies, because history would more-or-less repeat itself roughly ten years later in the dotcom era.

Lesson one is that there is a lot of overhead in a public company which has nothing directly to do with developing, selling, and shipping products, and satisfying customers. Although I worked in the main facility of AT&E in Portland where nearly everything product and service-related happened, there was a whole other headquarters office in San Francisco which is where the company’s top executives resided; I described this office a bit in my tales of the headquarters effect post. I was told that one of the reasons the headquarters office was so opulent was to project an image of financial strength to analysts and investors. It was explained to me that when companies only have a few investors (the venture-financed model) those investors want to see their investment money spent judiciously and frugally; but when a company has many investors (the Wall Street model), new investors are more comforted by a majestic headquarters office which shows the new investors that the company already has serious money behind it, and they are joining a crowd of smart, deep-pocketed existing investors.

Lesson two is that it is very difficult for Wall Street to properly value an early-stage startup company, and when the Street loses faith in the company’s ability to hit the analysts’ growth projections, it can be game over very quickly. Wall Street can be fooled on both sides: overvaluing a nascent business that has yet to prove it can generate real cash flow, and undervaluing a technology that has not yet achieved mass market adoption. For early-stage public companies that lack forecastable traditional sales and profits metrics, the analysts still try to construct spreadsheet-based financial models by using early indicators of eventual market success, such as adoption rates and costs to acquire customers. A good fraction of the work done in the AT&E headquarters office was preparing and disseminating metrics and indicators to stock analysts.

When the first-generation watch finally made its way to market and started to miss the robust projections, faith was quickly lost. Coupled with an overall stock market downturn after Saddam Hussein had invaded Kuwait, the company found itself unable to raise much needed capital on any terms. AT&E went from a high growth mode to bankrupt in twelve months. Seiko bought the assets out of bankruptcy court several months later and funded it themselves for years after, bringing several more versions of the product and service to market before finally realizing that cellphones had eliminated the need for pagers of any sort. Large Japanese companies have a very different time horizon than Wall Street.

I didn’t take the end of AT&E too hard. Seiko flew a well-respected manager over from Japan to tell all of us engineers that Seiko would hire us if we just waited for them to get control of the company in bankruptcy court. But as interesting as the technology was, I had become especially intrigued with the packet networking aspect of it. I looked around for a new gig and got an offer from an established company in Portland, ADC Kentrox, that was focused on proprietary private wide-area networks as well as starting to dabble with products for the up-and-coming public “network of networks”, something called the Internet. Meanwhile the financial lessons I learned at AT&E saved me from losing money during the dotcom boom, as I never invested in any dotcom stocks.

More on how the end of AT&E transpired for me