How I helped Gert Boyle see the light

tl;dr: When Portland drove out the headquarters of Columbia Sportwear, I played a bit part...

Amazon’s decision this week to not put one of their HQ2 locations in New York City, after they had faced strong opposition from some New York politicians and citizens, brought back memories of another time that a city drove a headquarters location outside of its borders. That time was 2001, the city was Portland, the company was Columbia Sportswear, and I played a minor, indirect role in the saga.

Columbia Sportswear was and is one of the most successful businesses ever founded in Portland. For decades it was located on the north side of the city, near its namesake Columbia River. This retrospective article from the online version of Portland’s newspaper of record, The Oregonian, gets the main facts right about Columbia’s relocation decision, as I remember them from the time.

At the turn of the century Columbia was bursting at the seams due to the growth of its business and needed to move into a larger building. They actually wanted to move much closer to downtown Portland, but were stymied by the city and Multnomah County in their efforts to obtain a suitable property or building. In particular I recall a lot of controversy over a site near the Oregon Museum of Science and Industry: the city was foisting all sorts of conditions, expense, and most importantly delay on Columbia in order to be allowed to redevelop the site, which was pretty much vacant wasteland at the time. Columbia needed to move quickly, so they chose an existing building in the nearby western suburbs. 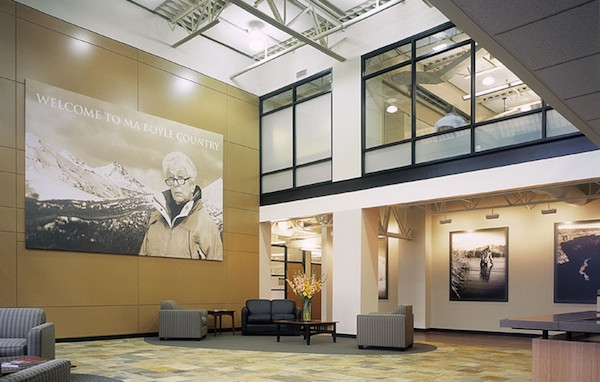 Gert Boyle was the face of Columbia Sportswear for many years

As it turns out the building and property Columbia chose, at 14375 NW Science Park Drive, Portland, was where I worked from 1991 to 1998 while at ADC Kentrox. The property was in a somewhat unique jurisdiction, officially in “unincorporated Washington County, Oregon”: outside the city limits of Portland, although the mailing address was Portland; outside the nearby city of Beaverton; outside of any city or town, actually; and outside of Multnomah County. I’m sure Columbia was attracted by this lack of oversight from various governmental officials: there would be less need to seek government permission to do what the company wanted to do to grow its business, in stark contrast to what they had experienced in Portland. There was also one unusual aspect of the building itself which was attractive to Columbia and which differentiated that building from others they could have chosen.

While I was at ADC Kentrox, the company grew rapidly by surfing the wave of the late 1990s Internet/telecom boom. When I started in 1991 the company did $25 million in revenue; when I left in early 1998 the company had just done $144 million. The employee count was growing along with the revenue figure, and, like Columbia, we needed more space. The company built a new expansion wing onto the original building, but we started to fill that new wing up. So in 1997 we planned another new wing, which would use the last big piece of available land on the property.

I was a big fan of skylights, especially in a place like Oregon, which is cloudy and dark much of the year. The cloud cover acts as a natural diffuser, eliminating blindingly bright sunshine. During the few months when sunshine is prevalent, in the summer, people are typically so happy to see the sun that they don’t mind basking in the sunshine. I had skylights in my family’s house in Portland, and loved how they brightened up the place and made it less dreary. The footprint of the expansion wing was fairly large, meaning people in the center of the wing were going to be pretty far from the exterior windows, so I thought some skylights in the center would help. By cutting a hole in the top floor to allow some light to reach the next floor down, it would brighten up that floor as well, and make the people stuck on that floor less likely to feel that they had gotten shafted in their seat assignment.

I pushed hard for my skylights as the executive staff discussed the plans for the new wing. My chief opposition was the VP of Operations, whose primary job was to run the factory but who also had responsibility for the facility. Factory bosses almost always have a strong cost-cutting mentality, and there’s no doubt that the skylights would add to the construction costs, reduce the amount of available floor space because of the floor cutout, and add to ongoing operating costs. I heard every objection possible: the skylights were going to leak; someone would have to be regularly dispatched to the roof to clean the skylights; people would complain about the sunshine and we’d then have to figure out some sort of diffusion or shading system. My position was much harder to quantify into dollars, as I basically felt the skylights would make employees happier. I jokingly argued that what we really needed was a retractable roof, to allow employees to fully enjoy the few sunny days in Oregon, and that skylights were my compromise position. Fortunately the CEO ended up siding with me, and the expansion wing was built with skylights.

I never got to experience my skylights. I left ADC Kentrox in 1998 while construction of the new wing was getting started, and I’ve not been back in the building since. I did hear from former coworkers who moved into the new wing, and the skylights were a big hit. I learned how to spot my skylights from airplanes at night: the building is close to the first or final turn to the west of Portland International Airport for planes heading or arriving south, and the skylights stick out as two large shining beacons at night, when much of the rest of the nearby land is dark or lit by small points of light.

After I left, ADC corporate decided to start shifting investment out of ADC Kentrox to other locations, in Texas and their Minneapolis headquarters where they had some very large development projects underway. The employee count started to drop. ADC decided they didn’t need the new expansion wing after all, and could potentially reduce expenses by moving into a smaller building. They started shopping the building around the time that Columbia decided to pull out of Portland, and a deal was made.

Columbia has since done some major improvements to the building, making it into an even more attractive place to work. My skylights are still there, last time I checked. I like to think that they have made Gert Boyle and the other Columbia Sportswear employees just a little bit happier as they go about their work days.