The luckiest event in my life

tl;dr: The story of the longest-odds event that ever happened to me...

I recently had the luckiest event in my entire life happen to me, to the best of my recall. By luckiest, I mean the lowest probability event, without any consideration as to how important this event was to me. The importance of this event was actually trivial: it was the odds that made it memorable.

To set the stage: when my family relocated to Arizona, I was the first to make the move. Shortly after arriving in early August, I bought a used car from a dealer that was to become my wife’s car. The plan, which we executed, was to have her drive my Jeep to Arizona in November, at which time we would swap vehicles and I’d get the Jeep registered in Arizona. Accordingly, there was a more than three month gap between the two car registration events.

I filled out the registration paperwork at the dealer, and the plate arrived in the mail within a week or two. It started with the initials “CJR”, which is one letter off from my initials of “CJS”. I thought I had just missed getting extremely lucky. I knew that Arizona handed out non-vanity plate numbers in sequence: they were (and are still, as of this writing) chugging through the C’s, and may start handing out plates that start with “D” next year. Since I wouldn’t register the Jeep for another three months, I figured I would get a plate somewhere further along in the “Cxx” sequence for the Jeep, past my initials.

I showed up at the local Motor Vehicle Division office to register the Jeep around Thanksgiving and handed over my paperwork to the clerk. She went behind the counter and grabbed the top plate off a stack of non-vanity Arizona plates and handed it to me. I was shocked to receive a plate that had my initials on it. 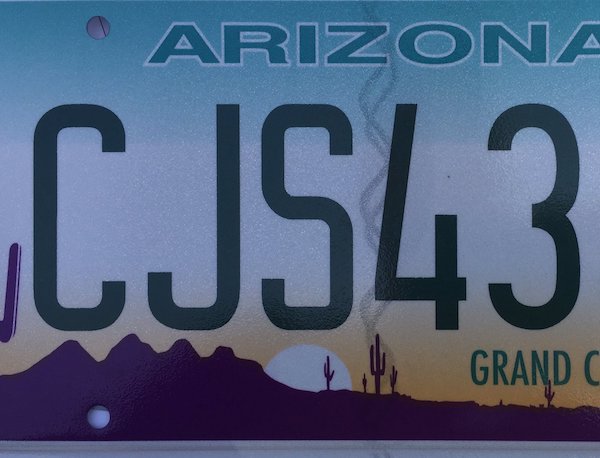 My initials on my non-vanity plate

The odds of receiving a plate with your exact three initials on it are somewhere in the range of 1 in 17,576, if you assume that the plate numbering scheme contains no more than three letters, all of which can appear with equal probability. Certain three letter combinations are probably excluded due to concerns about offensiveness, so that slightly improves the odds. But some plate numbering schemes don’t contain three letter combinations: in Illinois, our cars’ plates just had seven digits on them.

In retrospect what likely happened in August was that my first plate was sent in the mail from the main Arizona plate distribution facility, which also shortly thereafter shipped a supply of plates to my local MVD office. The local office was still handing out plates from this shipment when I showed up in November.

Moving to a state and being handed a plate with your exact initials on it is quite a longshot event. I can’t think of another event with longer odds that has happened to me in my life. I’ve only purchased a few lottery tickets in my entire life; I’ve never won the big jackpot. As a general rule I’ll only gamble when the odds are in my favor, so I avoid casinos. The small amount of casino gambling I’ve done has never produced a big payout.

When people use the word “lucky”, they often also mean “important”. Certainly I’ve had a few lucky and important events happen in my life. There was some luck involved in getting into Cornell, especially when my original alumni interviewer from the Engineering College couldn’t do my interview and passed my along to a humanities major from the College of Arts & Sciences, who was blown away by the fact that I knew how to program computers.

But looking purely at the numbers, the odds of any applicant at that time getting into Cornell were on the order of 1 in 3 or 4 (they’ve since dropped considerably, as I discussed previously). I was also lucky to get chosen by my employer at the time to attend an executive education program at the Harvard Business School. But again, looking at the numbers, they chose one person every year, and there were fewer than 17,576 people working at the corporation at that point in time.

I was lucky to marry my wife, of course. Some people hold the romantic notion that there is just one other person on the entire planet who is their soulmate (a sole soulmate, as it were), so the odds of finding that one person are 1 in a few billion. As in most things, I take a somewhat more pragmatic view: there are probably more than 1 in 17,576 women that I would have been happy marrying.

I was lucky to be born into a middle class family in the United States of America, but those odds are also better than 1 in 17,576. So I’m having a hard time coming up with a lucky event that has happened to me where the odds are longer than 1 in 17,576. I probably won’t ever get this lucky again.

Needless to say I now have to stay in Arizona for the rest of my life, so that I can retain my license plate with my initials on it.😉