tl;dr: An impressive display of science fact is located not too far from popular displays of science fiction...

Walt Disney World Resort makes for a truly memorable family vacation, especially if you have to travel more than a thousand miles to get there. I was fortunate enough to be taken there as a kid on a family trip organized by my maternal grandmother; I returned decades later with my own nuclear family. It grew tremendously over the intervening years.

Disney World is fantasy brought to life, and a tribute to the craft of those who create, tell, enact, film, and animate stories. It’s the largest exhibit of fictional storytelling on earth, and many millions of visitors flock there every year. Yet about an hour’s drive east of Fantasyland and the forthcoming Star Wars: Galaxy’s Edge exhibit is one of the largest exhibits of science fact on earth: the Kennedy Space Center. Far fewer people make the trip there, but if you are at all interested in seeing some real spaceships, a real space port, and meeting real astronauts, it is well worth a day’s trip. 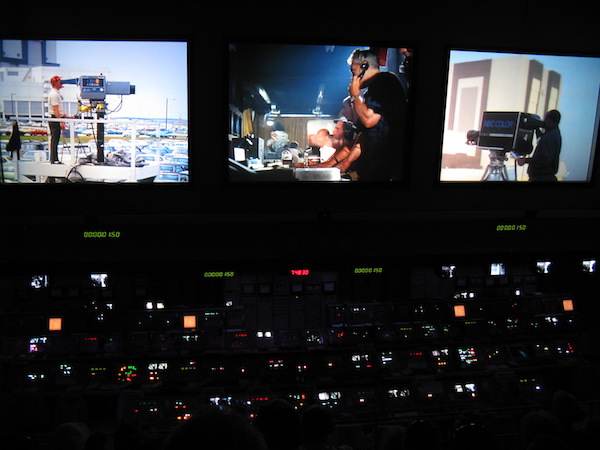 The Apollo Launch Command Center, brought back to life

Touring the Kennedy Space Center is especially awe-inspiring for someone of my generation, who has memories of watching the live Apollo program TV broadcasts for hours on end. When I visited in 2010 there were still plenty of remnants of the Apollo program, even though it was the tail-end of the space shuttle program (Discovery was on launchpad 39A, preparing for its final mission).

Having seen them so often on TV, there were two sites on the tour that brought back especially strong memories: the Apollo Launch Command Center; and the viewing area with the outdoor countdown clock, where dignitaries would gather on bleachers to watch the launch from a safe distance. The Command Center is technologically obsolete, but it has been preserved as a museum exhibit. After our tour group walked into a viewing area with the lights on in the main room below, where the old control and monitoring equipment resides, the lights were extinguished and the equipment sprang to life, along with wall displays showing footage from the Apollo era. It was a very powerful moment, even though it was a recreation of events from decades earlier. 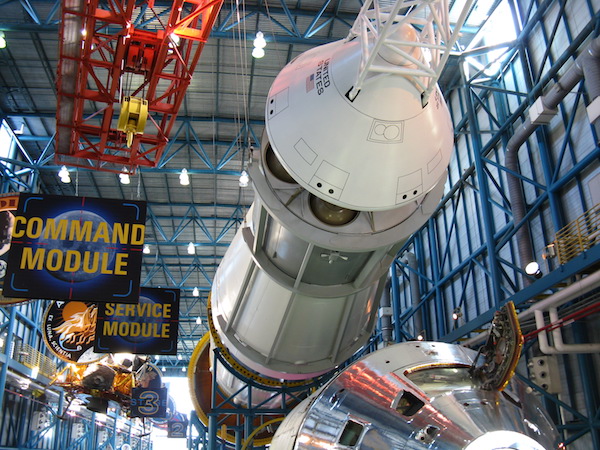 A preserved Saturn V rocket on its side in a hangar

The single most impressive site on the tour was a large hangar where a Saturn V rocket is laying on its side. As the Wikipedia page states, the Saturn V remains, 50 years after launching Apollo 11 to the moon, the “tallest, heaviest, and most powerful rocket ever brought to operational status”; it has yet to be eclipsed. If the rocket were a conventional building it would be more than 30 stories tall. We were allowed to wander beneath its entire length, which drove home two strong points: one, just how much fuel and power is needed to send three people to the moon; and two, just how risky it was for the astronauts to sit in a small chamber on top of this huge rocket, hoping it would not malfunction.

As befits its purpose of being a spaceport where large rockets are assembled, staged, and then burn and exhaust huge amounts of fuel, the Kennedy Space Center is many miles long and wide, and has highly specialized facilities. We weren’t allowed inside the Vehicle Assembly Building where the Saturn V rockets and space shuttles were assembled upright for the first time. Given the height of the Saturn V, the Vehicle Assembly Building has to be even taller, and is effectively the world’s tallest single-story building, with a height of over 500 feet. 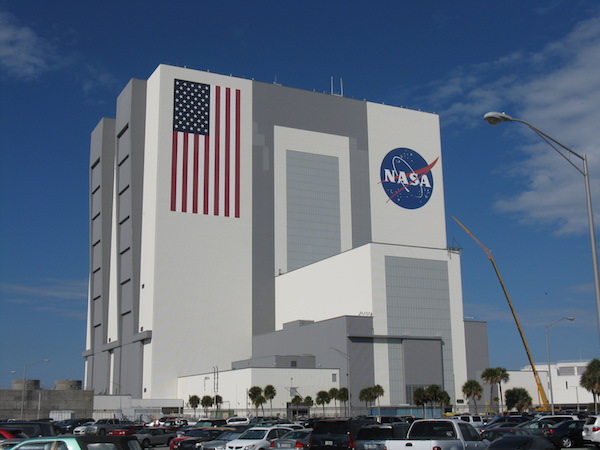 The Vehicle Assemble building towers over the Florida flatness

The Saturn V and space shuttles were placed on huge crawlers for the slow journey from the Vehicle Assembly Building to the launch pads. Because of the weight of the rockets and the crawler, the roadbed the crawler traverses is specially designed so that the crawler doesn’t sink into the Florida sand. For an engineer like me, it’s an impressive engineering feat on a scale that you don’t see in any other real-world applications.

The best thing about the Kennedy Space Center is that it is not just a museum. Even with the long-ago end of the Apollo program and the end of the space shuttle program, it remains a working space port, with ongoing launches of government, military, and civilian rockets. 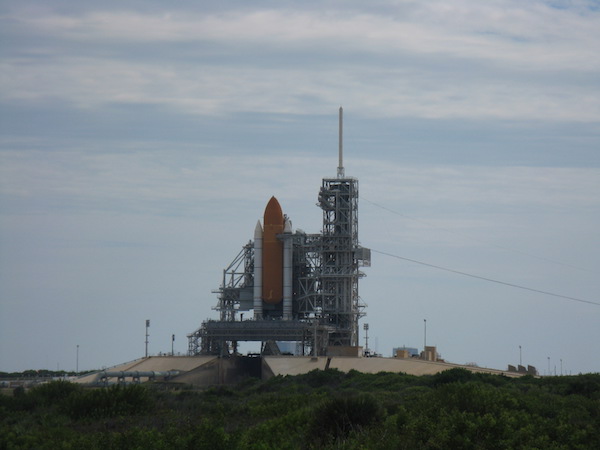 Space shuttle Discovery on Launchpad 39A before its last mission

On one measurement scale, that of the journeys undertaken by the human species, the Apollo program remains, fifty years later, our collective greatest achievement. I’m confident it will someday, perhaps in the next decade, be eclipsed. In the meantime it still is worth remembering and celebrating, which is why if you find yourself in Orlando, Florida to visit a certain fictional mouse, I recommend planning a side trip to the Kennedy Space Center.