tl;dr: Paul Westphal was once Arizona’s best ambassador, whether he knew it at the time or not...

I realize, now, that when I was a kid there were few opportunities for me to see color motion images of the state of Arizona. I grew up in upstate New York in the pre-Internet days, when there were just four television channels. Static pictures in the newspaper were black-and-white, and color pictures arrived in the mail in the weekly news magazines: Time, Newsweek, and Sports Illustrated. I do recall thumbing through Arizona Highways magazine in the local library, and being impressed with the beautiful scenery of what was, to me, a shockingly different and foreign landscape. Young me had a hard time believing that Arizona was part of the same country.

The two main opportunities I had as a kid to see live motion images from the state of Arizona were nationally televised sporting events. Back then the only major sports league which had a team in the hot, dusty, desert outpost of Phoenix, Arizona was the NBA, with the appropriately-named Phoenix Suns, who were occasionally featured on the NBA game of the week on Sunday afternoons. The other nationally televised Arizona sporting event was the Fiesta Bowl. Many of my early impressions of Arizona were formed by watching these televised games.

As a kid I followed the NBA closely and was a huge Boston Celtics fan, as were my parents. The Celtics were almost always competitive and won the NBA Championship in 1974. For some reason they then exiled one of their young, rising stars, Paul Westphal, to the desert by trading him to the Phoenix Suns. Westphal made the Suns into a competitive team, which caused them to be featured occasionally on the game of the week. Westphal led the Suns into the NBA finals in 1976, where they faced off against, as fate would have it, my Boston Celtics. I remember following every twist and turn of Game 5, the so-called “greatest game ever played”, on TV along with my family. Westphal did a number of amazing things in that game, which caused me to again question why the Celtics had sent him to Phoenix. 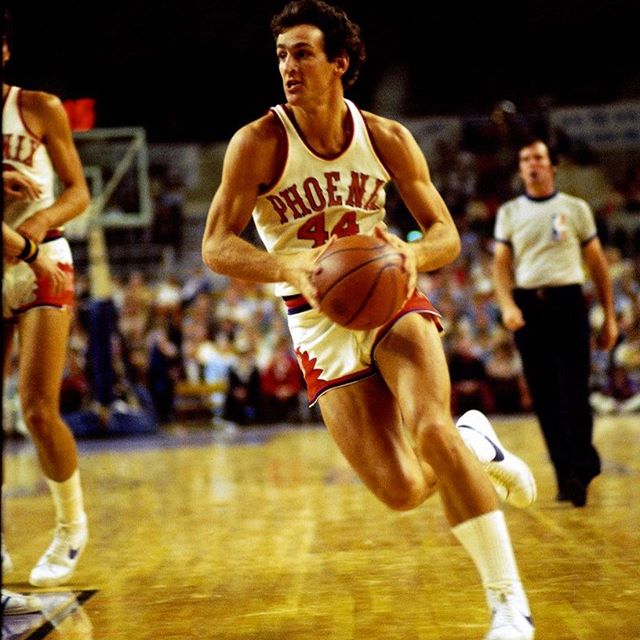 Bostonians can be a bit elitist; they sometimes call their city “the Hub of the universe”. Exiling Westphal to Phoenix was, to a Bostonian, like exiling someone to Siberia. Westphal, however, seemed to be happy and thriving, as though he was having the last laugh. He was a handsome man, and while with the Suns he sported a deep tan, in stark contrast to the players on the Celtics, who had zero opportunities to work on their tans while playing basketball in Boston. It always seemed to be sunny outside when they televised Sunday afternoon Suns games from Phoenix. It slowly dawned upon me that maybe there were some upsides to spending the winter in Arizona.

That impression was reinforced by watching the Fiesta Bowl, which grew into national prominence in the 1970s and 1980s. There were a lot fewer bowls back then, and the focus was usually on the four major bowls: the Rose, Orange, Cotton, and Sugar Bowls. The Fiesta grew to become the fifth major bowl.

Of these five major bowls, two of them didn’t feature particularly pleasant landscapes. The Cotton Bowl took place outdoors in Dallas, and while it rarely snowed, the fans were usually bundled up somewhat. The Sugar Bowl was held indoors in the dark interior of the Louisiana Superdome, so it wasn’t possible to tell how the weather was.

The Rose Bowl, held in its namesake stadium in Pasadena, California, certainly had plenty of sunshine. But sometimes it was a bit chilly during the Rose Bowl parade on New Year's morning; there was a reason, I decided, why the USC Song Girls wore sweaters with long sleeves. That left just two bowls that could be counted upon to feature warm temperatures and people in minimal clothing enjoying the nice weather: the Orange and Fiesta Bowls. The Orange Bowl, however, was usually held at night. 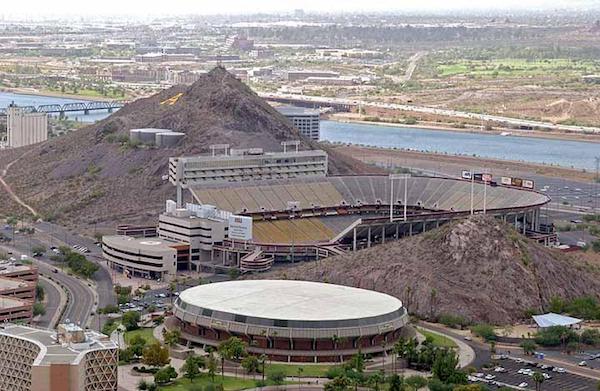 The site of the Fiesta Bowl in the 1980s, Sun Devil Stadium

That cleared the field for the Fiesta Bowl to produce the best images of fans basking in the sunshine. The game used to be held outdoors during the daytime at Sun Devil Stadium. TV cameras would occasionally pan to show people relaxing on Hayden Butte, far above the field. Everybody seemed to be enjoying themselves, and many were wearing shorts. Outside, in January! It was quite a contrast to the snowbound landscape visible from the window of the room where I was watching on TV.

I assume there were some smart folks at the Chambers of Commerce in Phoenix and Tempe who realized that those televised sporting events were great advertisements for the state of Arizona. Today’s media landscape is much more cluttered, so Phoenix Suns games and the Fiesta Bowl can never have the impact they once did. Back when I was a kid, Paul Westphal was a true ambassador for the state of Arizona.