tl;dr: How having kids can help keep weight off...

As I watch people around me either start or add to their families by having babies, it brings back memories of my own child-rearing days. Some of those memories concern food and how the kids would help my wife and I regulate our food intake.

One particular scenario happened so often that my wife and I gave it a name: the toddler diet. Kids generally start on solid food well before they can walk, so by the time that they are toddlers they are also interested in a wider variety of foods. Once kids become mobile and more able to express their desires, the challenges of managing them increase.

An episode of the toddler diet was especially likely to happen if one of us parents were eating at a different time than the rest of the family, but it also happened at family meals. My wife and/or I would sit down to a meal in front of a plate containing the portion of food we wanted to consume. The toddler would decide that the food on mom or dad’s plate was especially attractive, and would wander over and demand to be picked up and placed on the parent’s lap. This put the toddler in the perfect position to pick up the parent’s utensils and consume as much of the food on the parent’s place as the toddler desired.

Being lenient parents, we allowed this. If all the food had been served, or we were too lazy to replenish what the toddler consumed, we’d be left with less than a full portion for ourselves. We joked that this was a good way to help the weight off by consuming less food.

Each of the kids eventually progressed beyond this phase, but I had a flashback to it years later, when they were still young children. We lived in Oregon at the time, and had an occasion to take a family vacation back to the Northeast United States, where I was raised. We made a trip to Cape Cod, in particular the town of Orleans on the elbow of the Cape, where I used to vacation with my nuclear family when I was a kid. 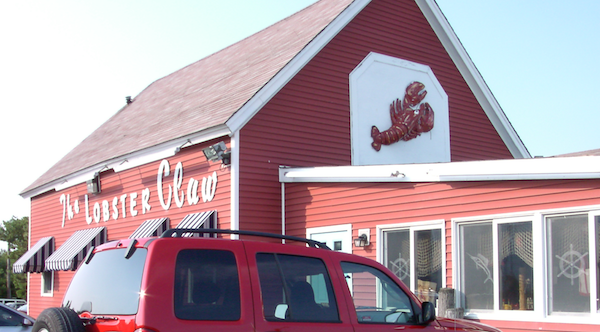 I was looking forward to the chance to eat a fresh boiled lobster, which is one of my favorite meals. We went to an old lobster restaurant that was still in business from when I was a kid, and which is still in business today: The Lobster Claw Restaurant. It wasn’t much more than a shack located near the beach, but it had great lobsters, which it obtained fresh and alive from the lobster boats which docked nearby. You couldn’t get lobster any fresher without catching them yourself.

We walked into the restaurant, which had a big tank of live lobsters right by the greeter’s desk: you could even pick out your exact lobster if you wished. I explained to my kids how lobster was the specialty of the house, and just how tasty lobster was, and urged them to give it a try. However they had never seen a live lobster before, and were quite put off by how scary they looked, with their large pincer claws. There's a reason some people call them "bugs". When we placed our orders after being seated, the kids wanted nothing to do with any lobster, and ordered off the kid’s menu. Only dad ordered a lobster. 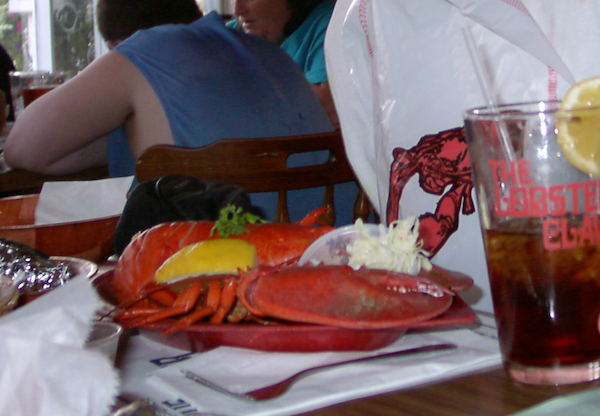 My boiled lobster, just before I had help consuming it

When the meal was served, my red, boiled lobster looked quite different than the brown, live ones in the tank up front. It wasn’t moving menacingly. I cracked open the lobster, speared some of the white meat with my small fork, dipped it in melted butter, and gave my oldest a taste. Well, she decided right then and there that lobster meat was just about the sweetest meat on earth. She abandoned her chicken nuggets (or whatever she had ordered) and proceeded to consume at least half my lobster, leaving me with considerably less lobster than I had been anticipating. Boiled lobsters take a while to prepare, so it was too late to order another one. Even though she wasn’t a toddler, the toddler diet had struck again, keeping me trim and fit.