tl;dr: The Great American Novel that hardly anyone has read...

For fairly obvious reasons, David Foster Wallace’s (DFW’s) Infinite Jest is a challenging read. The Little, Brown and Company trade paperback edition I read ran to 1,079 large, dense pages of text, nearly 100 of which are even more dense footnotes, some of which run for more than 10 pages and contain their own footnotes. There are paragraphs that continue on for several pages. The story jumps around in time, and it can take hundreds of pages to piece together events into the proper sequences of time and causation. The narrative voice changes perspective constantly. A huge number of characters are introduced, many of whom disappear without further mention even though their storylines are unresolved. If you do reach the end, expecting the major plot lines to be concluded, you’ll be disappointed. 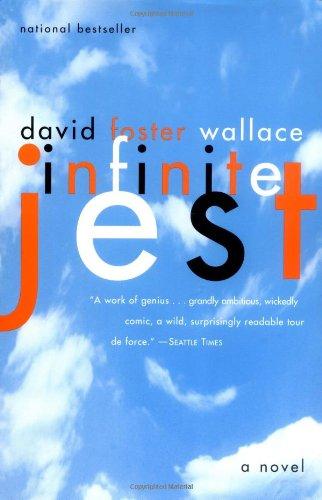 Infinite Jest was published in 1996. I bought my copy at the Portland airport branch of Powell’s Books in 2003, at nearly a 50% discount off list price: an indication that it was a tough sell in addition to a tough read. I left it on the shelf until I was done raising kids, because I knew it was going to take a lot of solitary time to get through it. And now I get to pass it along to one of those kids, who saw me reading it and requested my copy.

Yes it’s a challenge, but Infinite Jest can make a serious claim to be the current-day Great American Novel. The main theme is one of the three explicitly listed “inalienable rights” from the Declaration of Independence: the enigmatic one, the “pursuit of happiness”. How exactly does that play out in modern American society more than 220 years after those words were first written?

Although published in 1996, most of the action in Infinite Jest takes place in the first decade of the 2000s, so present-day readers get to look back a bit and see how much DFW got correct. Although there is much exaggeration for comedic effect in Infinite Jest, it can be argued that DFW foretold many of the problems American society increasingly struggles with today, including the rise in drug addiction (especially the opioid epidemic), homelessness, mental illness, and suicide. The U.S. president during the timeframe of most of Infinite Jest is an entertainer with some quirky policies who is not exactly respected for his intellect. On page 416 of the edition I read, DFW almost perfectly describes the present-day Netflix streaming video service. He doesn’t get every detail right, but it’s not the point of the book to exactly predict the future.

What DFW does is to try to imagine what Americans, told by the founding fathers to pursue happiness, will do in a future with more variety and more powerful options in the realms of technology, entertainment, and mind-altering chemicals. What would happen if people could easily stream any entertainment they wished? Or if an entertainment appeared that was so riveting that it was impossible to stop watching? Or if people had even easier access to nirvana-inducing pharmaceuticals? The results, for the most part, are not pretty, which is why addiction and suicide are also strong sub-themes in the book. Yet even with these dark themes, DFW liberally sprinkles in satire and comedic elements, which kept me laughing throughout, albeit often at the stupidity of the characters.

A Whataburger in Arizona, the sponsor and location, respectively, of the mythical tennis tournament in Infinite Jest

I readily admit that I was biased to enjoy Infinite Jest because, coincidentally enough, DFW is just a bit older than me and we both lived in many of the same places, more or less. DFW was born in Ithaca, New York and I went to college in Ithaca. He was raised in Urbana-Champaign, Illinois, and I lived for more than a decade in the Chicago suburbs. We both went to college in the Northeast, in almost the same timeframe. Much of the action in Infinite Jest is set either in Boston, where I was born and also lived while a co-op student in college, or Arizona, where I live now (although I had no idea I would do so when I purchased the book). Some of the action takes place on the MIT campus in the student union, where I’ve been numerous times with my father, who went to school there. I’ve experienced a few pretentious academic parties, as DFW so humorously skewers in the pages of Infinite Jest. He briefly mentions Schenectady and several other locations in upstate New York, which is where I was raised. He describes a person in upstate New York addicted to M*A*S*H reruns, which my brother especially enjoyed watching when we were schoolkids. In short, DFW is from roughly the same time and place as me, although he is a much better writer.

DFW was a genius, on par with other favorite writers of mine including John Barth, Philip Roth, and Thomas Pynchon. Having had my mind blown by reading books from these authors, I have long realized that I did not possess the talent to become a top-notch fiction writer. Besides the overall complexity of Infinite Jest, there are other ways that DFW’s genius shines through. As he shifts the narrative perspective into the voice of other characters, including some rather crude low-lifes, he does an amazingly convincing job of speaking in character, including that of a tripped-out heroin addict. The drug research he did (hopefully not all first-hand) is more thorough than any reader would ever expect in a fictional work. He accurately portrays all levels of Boston society, from the addicts hanging out at the T’s Park Street Station to the snooty academics strolling the grounds of the local universities.

There are dark themes in Infinite Jest, but the comedic elements keep it from being a downer. The saddest part of reading Infinite Jest is not the book itself, but rather what happened to DFW years after publishing the book. It’s hard, today, not to look back at Infinite Jest and wonder just how much of it was a premonition for what ultimately happened to David Foster Wallace.