tl;dr: If you enjoy bicycling and haven’t yet gotten a carbon fiber bike, get one...

I finally broke down and bought a carbon fiber road bike five years ago. I had avoided doing so for various reasons: it seemed a bit crazy to spend multiple thousands of dollars on a bicycle; I don’t race bicycles and hence don’t need to squeeze the last bit of performance out of my gear; I was doubtful how much difference a few pounds in the frame could actually make; and, for reasons of safety and enjoyment, I usually avoid roads and instead ride on paved and unpaved bike paths, where skinny-tired road bikes are a handicap. Yet I had heard enough people extol the virtues of carbon fiber bikes to finally decide to get one. Now I have joined the ranks of the carbon fiber bike proponents.

Another impetus to finally get one was the deal I got at my favorite bike shop back in Illinois, Spokes in Wheaton. I’d visit often to have my family’s bikes serviced and to pick up accessories, and would gaze at the large selection of high end bicycles, vowing never to spend $5,000 or more on a bicycle. One day I was lifting up carbon fiber bikes with a finger and marvelling at how light they were. The store owner noticed me and gently steered me towards some older, heavily discounted models in the inventory. He was also able to swap various components and to custom-fit the bike to my tall body. Since I didn’t need the status or performance edge of owning the latest-and-greatest bike that had won the Tour de France, I was happy to obtain a Giant carbon fiber bike, with various components from Specialized and Shimano, at half price. 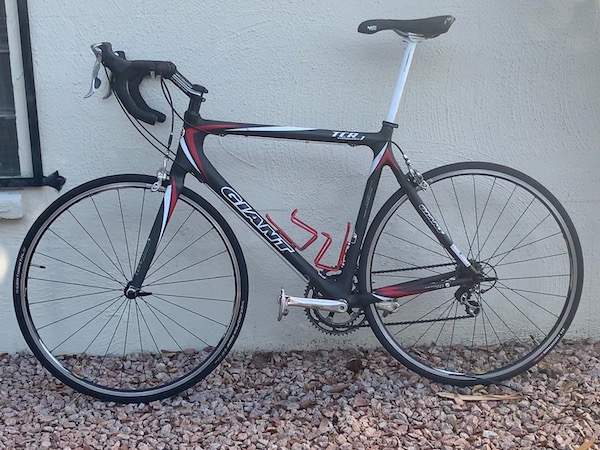 I am glad I did: my Giant road bike is a blast to ride. It is literally the most nearly perfect machine of any kind that I have ever owned, which I appreciate as an engineer. Cars with internal combustion engines are woefully inefficient, with much of the power generated dissipating in the form of heat, and with noticeable friction throughout the entire drivetrain. When I’m on my road bike, I have the impression of 99% of the energy I am putting into the bike being transferred directly into forward motion. The resistance comes from a small amount of tire noise and, mostly, from the air, which is as it should be. During those occasional blissful moments when I have a 20 mile per hour wind at my back, there is almost no noise or resistance at all: it is a magical moment of human-powered flight, albeit bound to the ground by gravity. The only thing better would be soaring into the air: I can see where the bicycle-making Wright brothers got their inspiration.

The Shimano components create the smoothest-shifting bike I have ever owned in my life. A small flick of the fingers and the gears shift immediately into the desired position, often without any noise at all other than a barely perceptible click. I almost always ride with bike shoes clipped into the pedals, although the pedals have a flat side opposite the clip-in side, to permit biking in regular shoes. Maintaining the bike is merely a matter of lubing the chain every now and then, topping off the air in the tires, and repairing flat tires. I’m still in search of flat impervious road bike tires, and willingly sacrifice a little performance to reduce the number of flats. I’ve tried Continental Gatorskins, but no tire can fully protect against Murphy’s Law in the form of a tiny sharp object aimed straight up in the roadbed.

I’ve put no accessories on the bike; it did come with a white front reflector that I’ve kept. Because there is no lock, I can’t ride it to a destination and leave it. Bike locks are notoriously easy to pick anyway, and any smart bicycle thief is going to go after the most expensive bike first. I don’t have a bike computer or odometer on it; the mileage I’ve clocked is all based upon recorded notes I’ve taken where I knew the mileage through other means.

The bike is impractical. I don’t ride it on bike paths because it would be dangerous to be clipped into the pedals with other people, bikes, dogs, and obstacles in the vicinity. Bike paths are not the place to ride anyway if you want to maximize speed. I only ride the road bike on lightly trafficked streets, almost always near home. If I did do a century ride, a triathlon, or a bucket list ride such as bicycling around Cayuga Lake (still on my list from my college days at Cornell) I would try to use my road bike. Instead I ride it for enjoyment and exercise, and still put many more miles each year on my trail bike. The one practical aspect of owning the road bike is that I now have a second bike to ride whenever one is in the shop.

Bottom line: if you enjoy bicycling and can afford it, you should get a carbon fiber road bike. It will allow you to enjoy cycling even more, in its purest form.