Book review: The Rise and Fall of D.O.D.O., by Neal Stephenson and Nicole Galland

tl;dr: A pleasurable romp through time for magic fans...

I’ll admit that I am not a fan of magic in literature. I find it hard to suspend my disbelief enough to accept that certain special people can alter reality by concentrating or speaking a certain way, although I can see why that would be appealing to others. I guess I am too much of a scientific rationalist, or a hopeless muggle. For this reason, and the fact that it was a series aimed at kids that came out when I was an adult, I was never captivated by the Harry Potter phenomenon. I even had a hard time accepting the plot of the wildly-popular movie Back to the Future, especially when some changes made to the past caused a photograph in the present to visibly morph and fade.

So I’m not the ideal audience for The Rise and Fall of D.O.D.O., which concerns both magic and time travel to the past. Authors Neal Stephenson and Nicole Galland do make an admirable attempt to explain, in scientific terms, how magic might be possible in the modern-day technological world. It won’t give too much away to say that they fundamentally attribute magic to quantum uncertainty and the multiverse. Accepting this premise, however, still leads to knotty problems such as: how does the present day get altered by making changes to the past; who retains knowledge of the prior state of the past; and when a person time travels, exactly what molecules on or in the person undergo the journey? For the latter, evidently not a person’s clothing, tattoo ink, or teeth fillings, but yes for the water and food swallowed a while back, which is still winding its way through the digestive tract. 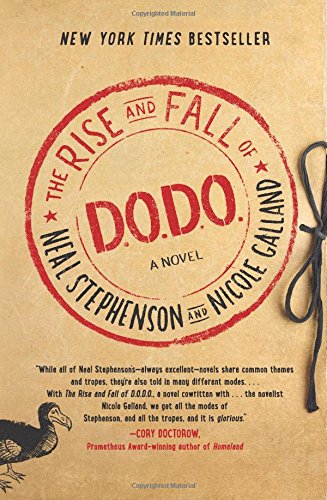 If you are fully able to suspend your disbelief, you will find The Rise and Fall of D.O.D.O. to be a pleasurable romp through time undergone by a cast of modern-day academics and military personnel. Stephenson and Galland chose an epistolary format, which works well for the book’s plotline and wide-ranging settings in time and location. However, the sheer number of settings limits the amount of historical background and context the authors are able to provide; readers are expected to fill in gaps in their knowledge by doing their own research.

I’m a big Neal Stephenson fan, and The Rise and Fall of D.O.D.O. is a different book than it would be if Stephenson were the sole author. The female lead character’s romantic thoughts while in professional settings, and the way she assesses the physical attributes of men, are probably not something that Stephenson dreamed up. There are other strong female characters including several practitioners of the world’s oldest profession, whose skills at influencing behavior are of high value to the past-altering missions. Stephenson often features strong female characters in his books, but Galland likely helped create a richer set of personas.

There’s a small stylistic quirk which I enjoyed: one of the characters crosses out common swear words and sayings in her writings and provides more descriptive phrases. In our society, the authors seem to be saying, profanity far too often substitutes for thinking.

The Rise and Fall of D.O.D.O. makes the point that modern science and technology has delivered many inventions (e.g. self-propelled carriages) that would have been the realm of magic hundreds of years ago. While technologists invent amazing things, technology itself isn’t necessarily good or evil: it depends on how it is used. Often, as the book demonstrates, technology gets turned over to the politicians and military. Unintended consequences abound, in both the technical and political realms.

Although time travel is possible in The Rise and Fall of D.O.D.O., the book raises the question: should we bother to change the past? Once you start messing with the past, where do you stop? Should we instead focus on changing the present to achieve a better state in the future? But that comes with its own set of unintended consequences.

If you enjoy magic, and want a pleasurable read which includes an epic poem written by Vikings transported 1000 years into a present-day Walmart, The Rise and Fall of D.O.D.O. is for you.