The New Yorker theater critic Hilton Als states in his introduction for The Best American Essays 2018: “But the essays of the future will or should start with questions, generally political in nature, and if you don’t think so, think again.” Als is a man of his word, and more than a few of his essay selections discuss aspects of identity politics. Although I personally cannot identify with many of the authors of these pieces, I enjoy learning from others’ perspectives. An essay, which should spring from the heart of the writer and describe the writer’s impressions of some aspect of the world, is an entirely appropriate tool to use to convey the writer’s feelings about identity.

The main criticism I have with the selections made by Als is that, being a theater critic, he included several pieces of art criticism in which the authors do what art critics naturally do: compare the art of one artist to other works of art and other artists. When extremely knowledgeable critics like Als do this, they can easily leave lay readers such as yours truly far behind. I simply don’t know the New York theater scene, or fashion scene, or punk rock scene from the 1970s well enough to follow the arguments put forth by the authors.

It is hard for art criticism to elevate to the point of great literature. The art critic has the challenge of writing in an artistic way while critiquing the style of another artist and invoking numerous comparisons to still more artists. Can art criticism also be art? I suppose, but not to the extent that it is represented in this volume. 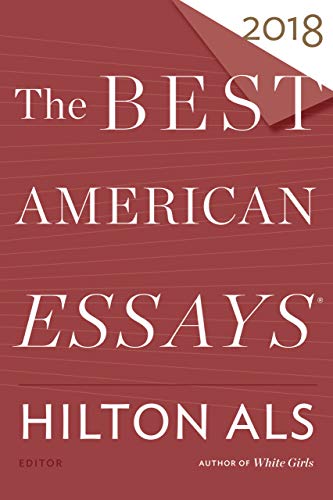 Here are my favorite essays in the 2018 volume:

“Rain Like Cotton” by Jennifer Kabat: This is a melancholy essay, full of decline and decay. Kabat focuses on the impact of mankind on the landscape and various attempts, mostly failed, to improve upon it. She hypnotically intermingles her impressions of these attempts, which are related only by the area in which they took place, the pine barrens near Albany, New York. This essay reminds us that we are just transitory, and nothing that we see or do is permanent.

“Losing Streak” by Kathryn Schulz: a personal essay on the loss of everything from the trivial and everyday (e.g. car keys) to the loss of loved ones and ultimately our minds and ourselves.

“My Father’s Cellar” by John Seabrook: a recollection of how the author was introduced to alcohol by his father, and how it played a large and occasionally detrimental role in both of their lives.

It is reassuring to see that Noam Chomsky is still actively writing, represented in this volume by his essay “Prospects for Survival”. Chomsky has a more pessimistic view about the future than I do, but Chomsky’s outlook might be improved if he would more closely examine some of his sentences, such as this contradictory one which argues that Russia may soon launch nuclear bombs on the United States: “Russian leaders may be tempted to undertake a preemptive strike just to assure survival, an act that would end organized human life on Earth”.

If you want to think and be challenged, you should enjoy The Best American Essays 2018