tl;dr: Sloan Park is what the Cubs should have done in Chicago with Wrigley Field...

I’ll eventually get around to visiting, and blogging about, all ten Arizona Cactus League stadiums. So far I’ve been to four, starting back in 2013 (see My one lucky travel delay: Camelback Ranch). Salt River Fields edges out Camelback Ranch for my favorite to date. Although it is the newest stadium of the ten as I write this, Sloan Park doesn’t make my Top Two list, although it certainly will for Cubs fans. I’m just not the target audience for Sloan Park.

Architecture should fit the setting. I believe this, and Frank Lloyd Wright believed this. When Wright came to the Arizona desert in the 1930s, he and his disciples started constructing Taliesin West by scraping dirt and rocks from the ground and forming them into buildings. Wright’s compound blends beautifully into the surrounding landscape, as does Taliesin East back in Wisconsin. But because the Arizona desert and the American Midwest are so different, the buildings in each location look different.

The architects of Camelback Ranch and Salt River Fields followed Wright’s lead, but not the Ricketts family (owners of the Chicago Cubs) when they commissioned Sloan Park. Knowing that Cubs fans are equally as enamored with the team’s home ballpark, Wrigley Field, as they are with the team itself, they had a modern, miniature Wrigley Field replica constructed in the Arizona desert. 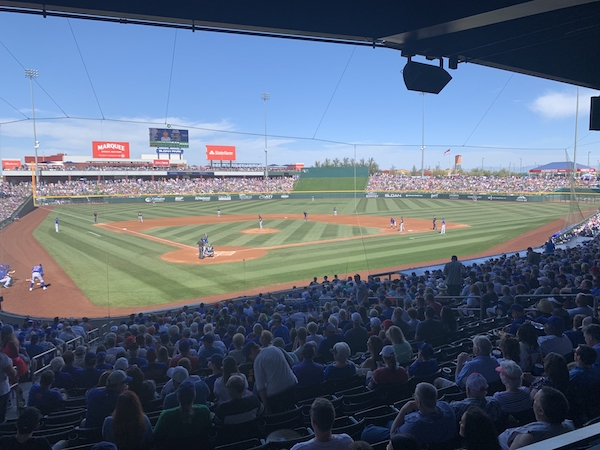 Cubs fans appear to love it, and flock en masse from Chicago during Spring Training. The game I attended, which also featured Chicago’s other MLB team (the White Sox won, 6-3), was the best attended game in Cactus League history to date, with 16,095 fans making their way through the gates (probably 10% to 15% White Sox fans and the rest Cubs fans). I paid over $40 (with handling charges) for a lawn pass, which is a pretty outrageous price for a Spring Training game. I could have bought a seat for over $100. So, from a business perspective, Sloan Park is a huge success. I can certainly understand the Ricketts’ motivation to give the people what they want.

When standing behind the home plate seats, the view is nearly identical to what you’d experience at Wrigley. The field is shaped the same, with the same irregularities in the outfield wall, albeit with slightly greater dimensions due to the thinner Arizona air. The seats are the same dark green color, which works well in Chicago but not in the sunny desert, as dark colors hold heat from the sun. The railings and the light stanchions above the stadium roof are shaped the same as at Wrigley, although there are additional lights on simple poles positioned in the outfield (another improvement that should be applied to Wrigley). The signage resembles Wrigley, complete with a replica of the famous red sign board outside Wrigley Field. The seats, however, do not all have the exact same orientation as at Wrigley: in particular, the Steve Bartman seats down the left field line at Sloan Park are oriented more towards the outfield. 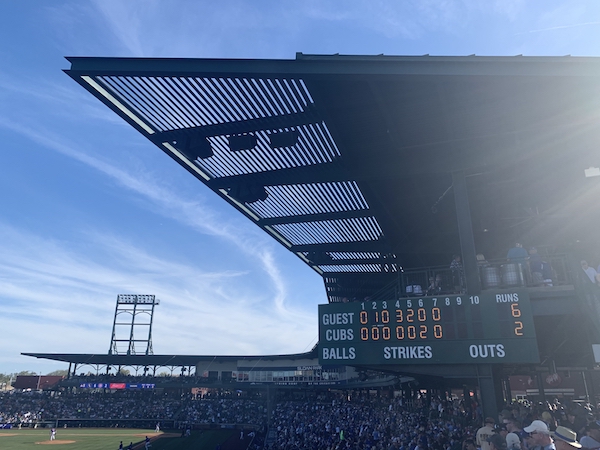 The spacing of the seats, aisles, concourses, and facilities is much better at Sloan Park than at Wrigley, which is cramped to the point of being uncomfortable, claustrophobic, and unsafe. People were smaller, on average, more than 100 years ago when Wrigley was built. There’s no concrete falling from the upper deck at Sloan as there is at Wrigley, albeit into netting which catches the larger pieces.

A brand new primary seating area is the number one improvement at Sloan that should be applied back at Wrigley, for reasons of both safety and comfort, and was why I was an advocate of the so-called foul-pole-to-foul-pole teardown and rebuild of Wrigley Field. Alas, the Ricketts family decided not to do this during their renovation of Wrigley Field. Maybe if enough Cubs fans visit Sloan Park and get to watch a Cubs game in safety and comfort they will start demanding the same back in Chicago.

Sloan Park is a money-making machine. I don’t think I’ve ever visited a baseball stadium anywhere that has a higher density of places to buy alcohol, concessions, and swag. People appear to love it. There were thousands of fans in the outfield downing beer after beer, not paying the slightest attention to the action on the field. The cash registers kept ringing. Between the high ticket prices and all the other stuff sold at the game, the Cubs probably grossed between $1 million and $2 million for one spring training game. In that sense, Sloan Park is a huge success.