tl;dr: Look and sound your best, and be nice to the other videoconference participants, by following these tips...

Shut down all other applications

I apologize for resorting to the standard tech support phone line advice of “turn it off, then turn it back on again”, but it likely will help. You may not need to turn your device off and back on again, if you can find the reboot command. A reboot will make several improvements. It will shut down all the applications you are running, and only run the minimal set you have configured to start up automatically when the device boots (note: you should can and should still close these other applications after the reboot). More importantly, it will give your device’s operating system a clean start with fresh, empty memory space to use for applications. The videoconferencing application likely will have more memory available to it, which will mean it can run faster. The memory also will be organized in more contiguous blocks, which means the application can run more efficiently.

Use or get a better computer or device

If the videoconferencing application on the computer or device you are using still seems sluggish after shutting down all other applications and rebooting, it may simply be too underpowered. Try switching to the most powerful computer that you have available. If it is still too sluggish on your most powerful computer, it may be time to bite the bullet and get a new computer. 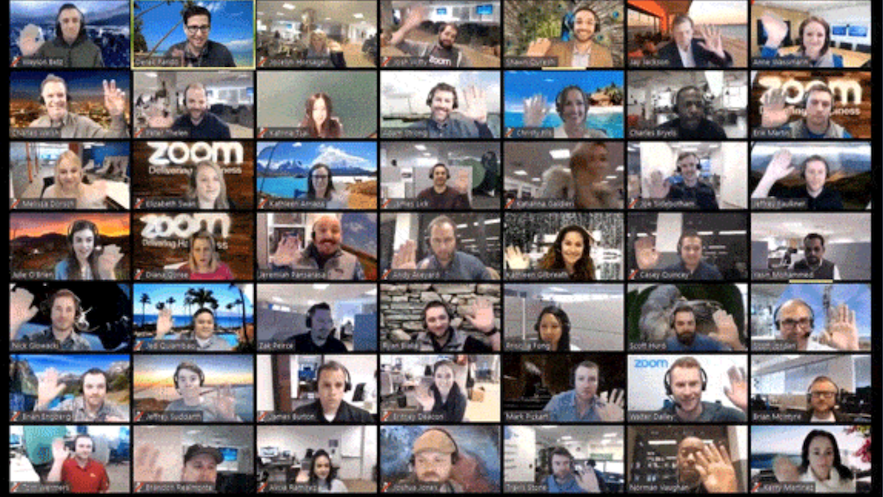 How to make this experience better for all

Switch from wireless to wired

This may not be easy to do, as your mobile device lacks a wired network port, and most computers these days come without an Ethernet port, which used to be ubiquitous. Still, if you are serious about audio and video quality, and you are willing to invest some time and a little money into setting up a dedicated videoconferencing location in your home, you should use a wired network connection to your Internet access router. Wired networking is inherently more reliable and less prone to interference than wireless networking, and it also has slightly less latency. Your connection won’t degrade when you move your device slightly, or someone in the household turns on the microwave oven (which can interfere with Wi-Fi networks). You may have to search for a dongle that you can plug into your device or computer to get an Ethernet port, and you’ll have to figure out how to physically wire that port to your router, but the investment in time and money can definitely pay off with a higher quality videoconferencing experience.

Move closer to your Wi-Fi router

If you insist upon using your wireless home network, move to a location that provides the best Wi-Fi coverage. Ideally you should locate yourself ten feet away from your Wi-Fi router, or in the same room as it, without any physical barriers such as walls or floors between it and your device. Avoid the fringes of range for your wireless home network. This will ensure that the first/last hops that the videoconference’s packets take as they traverse the Internet have minimal packet loss and latency. There are still plenty of other places in the Internet for packets to be dropped, but you don’t have direct control of the rest of the Internet: all you can control is your home network.

Choose a different time of day for the videoconference

It’s not often possible to do this, but if you can choose an off-hours time for your videoconference, you will likely get higher quality due to less Internet congestion and fewer dropped packets, which wreak havoc with the audio and video quality of a videoconference. The busiest hours for the Internet used to be between 5 p.m. and 9 p.m., as people came home from work and school and used their home computers and devices. Now, with so many people working from home due to the COVID-19 pandemic, the busy hours are 8 a.m. to 9 p.m. If you can possibly avoid these hours, it should help.

Turn off the background image

Yes, it’s fun (for a few minutes) to use the background image feature to make it appear to other participants that you are doing the call from a tropical beach. However, you’ve probably noticed that this feature doesn’t work very well. Unless you are using a green screen, which is what the pros do, there is probably some intermittent blurring and distortion of the edges of your body as the videoconferencing application’s algorithms struggle to detect exactly where the boundary of your person is. The application has to determine what is foreground and should be transmitted and what is background and should be replaced with the chosen image, and it’s not an easy task. Parts of your body may even flicker on and off, as the algorithm recalculates what it thinks the boundary is. I’ve even been on calls, especially with a white-haired person in a bright room, where the entire person flickered in and out. At that point the feature becomes more annoying than funny. The extra processing the application is doing to figure out the boundary of the foreground image adds latency and also makes it harder for the application to perform well on your end, because your computer has to work harder.

Wearing headphones will cut down on echo, since it will be harder for your microphone to pick up the incoming audio.

An easy, not terribly expensive way to dramatically improve how other participants perceive you on a videoconference is to get a good external microphone. I got one of the most popular USB microphones, the Blue Yeti, and others have told me it makes a major difference. Other participants pay more attention to what you say than anything else on a videoconference, and it helps them if your audio is crystal clear

The cameras built into laptops produce notoriously grainy images. You can improve the quality of the image you send into the videoconference by first improving the lighting around you, perhaps with diffuse artificial lights. If that isn’t sufficient, you can try using a higher quality external camera.

If you really want that funny background image, then you should go all-in and build a home television studio. I work with someone at meltmedia who has done so, and it’s pretty amazing what he can do on a videoconference. He can actually run an entire TV game show over a videoconference. All it took was:

You don’t have to go quite that far to improve your videoconferencing experience; the other tips in this post should suffice for most.