tl;dr: Thoughts on Westell’s delisting and its time as a public company...

The company I worked for from 2005 through 2015, Westell Technologies, just voluntarily delisted from the NASDAQ stock market (former symbol: WSTL). I served in various roles during my time at Westell, including as CTO and as a General Manager, so I got to experience what it was like being on the executive staff of a publicly traded company. There aren’t all that many public companies in the United States, as I’ll discuss below, so I am especially grateful to have had the opportunity to see what it is like to manage at a public company. It’s not easy, and has gotten harder over the years.

The delisting was a long time coming. The management team actually recommended it, or some other way to end Westell’s life as an independent company, to the Board of Directors when I was at the company. Once the company sold off its DSL and fiber-optic Internet access products to NETGEAR, the costs of being a public company were simply too high in comparison to the revenue and gross margin. The best course for the shareholders would likely have been to sell out to a larger company. Yet, for better or worse, the company marshalled on for nearly another decade as an independent public company.

This was primarily due to the son of the company’s founder, Buzz Penny, who controlled the fate of the company through family-owned Class B shares that had additional voting rights. To his credit, Buzz believed very strongly in the company, and recalled the challenges the company had to overcome to go public in the first place back in 1995, just as the Internet bubble was getting underway. During that bubble the company had a market capitalization of over a billion dollars. He kept hoping that there was a way to return the company to at least a fraction of its former glory. 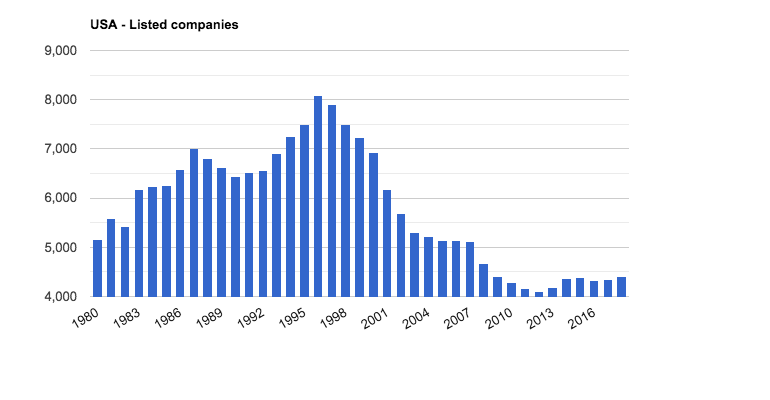 Westell’s time as a public company spans from the growth phase to the decline phase of public companies in the U.S.A. - from TheGlobalEconomy.com

Yet the company couldn’t overcome basic math: the costs of being a public company, which we estimated at $2 million a year when I was at Westell, were too high when the company’s revenue was under $100 million a year. It’s hard to measure precisely the total cost of being a public company; you might get close by doing an Activity-Based Costing analysis, a methodology pioneered by my accounting professor at the Harvard Business School, Robert S. Kaplan. When I was at Westell there was one person whose full-time job was to prepare paperwork to file with the Securities and Exchange Commission (SEC), so her salary and benefits were an obvious cost, as well as the SEC filing fees. But there were plenty of other people in the company, myself included, who spent a fraction of their overall time on tasks associated with being a public company. The accounting team had to prepare additional accounting statements, and read up on the latest procedures for doing so. The company had to spend a lot on an annual outside financial audit, and retain a high-priced audit firm, in order to impress the shareholders and regulators at the SEC. There’s a strong argument to be made that the company had to spend more on the CEO and CFO roles in order to hire people into those roles who would be impressive to regulators and industry stock analysts. The company also had to find a CEO and CFO who were willing to sign attestations for the SEC, under possible penalty of jail time, that the company’s financial statements were not fraudulent; this drove up the cost of those roles.

Because public companies have to disclose more information about themselves than private companies, they open themselves up to more potential competition. By releasing detailed financial statements and answering analyst questions on a conference call every quarter, competitors are able to learn which areas of the business are healthy and which are not, and where the company is focusing its resources. Competitors may even be able to deduce product pricing, or at least which lines of the business are the most profitable. The SEC’s disclosure requirements are one of many reasons why successful startup companies hesitate to go public: they don’t want to explain their business model to the world. The same applies to already public companies.

Then there are the strange things that happen only to public companies, but which impact the business and the people inside the company. When I got to Westell in 2005, I quickly learned that Westell was blackballed at SBC Communications, which soon became AT&T. I was part of the small team that eventually was able to make Westell’s first in-person sales call in years in an SBC/AT&T building in San Antonio, the headquarters at the time. I was told that I had to keep the meeting absolutely quiet because the SBC/AT&T people feared for their jobs if certain other people at the company learned of the meeting.

Why was Westell blackballed? SBC used to be a large customer of DSL access devices from Westell. During the latter stages of the dotcom/Internet/telecom bubble, Westell had a below-expectations quarter. On the quarterly analyst conference call, Westell’s CEO blamed the bad quarter on low shipments to SBC. Unfortunately, DSL access devices were an excellent proxy for how many new DSL subscribers SBC was adding to their network, so the analysts immediately deduced that SBC had a bad quarter in their broadband business, which was supposed to be a major engine of growth. SBC hadn’t yet announced their own quarterly results, so the Westell CEO’s comments drove down the price of SBC’s stock. It took years for SBC management to forget or forgive Westell for that incident.

Another thing that only happens to public companies is lawsuits over insider stock sales. If insiders sell to the public, and the stock subsequently goes down for whatever reason, even if the overall market is tanking as the dotcom/Internet/telecom bubble bursts, some lawyer somewhere is likely to file a class action lawsuit. I wasn’t at Westell during the bubble, but there were bubble-era lawsuits filed against various insiders, and there was still one in process in 2005 when I got to the company. These lawsuits ate up executive time and the company’s money.

Given all the downsides of being a public company in the 21st century, it is not surprising to me that fewer companies are choosing to be public and to be regulated by the SEC. My rough rule of thumb is that a company should have at least a billion dollars in annual revenue to be public, just so that the compliance costs aren’t unduly burdensome. Westell was far below that threshold even in 2005 when it still had the DSL and fiber-optic Internet access products that got sold to NETGEAR. It shouldn’t have been a public company then, but it took another 15 years, and further decline in revenue, for the company to finally fix this issue.

I would prefer a country and world with more public companies. It would create more competition in multiple markets: the product and services marketplaces (which benefits consumers), the job market (which benefits workers), and the stock market (which benefits investors and pensioners). During the first part of my career, up until the dotcom/Internet/telecom bubble burst, the technology startup scene was much more dynamic than it’s been since the bubble burst. I’ve always enjoyed smaller companies the most, so a technology landscape dominated by a shrinking number of ever-larger dominant companies is not what I desire.

There are a number of reasons for the decline in the number of public companies in the U.S. over the past 20 years, but I think that Sarbanes-Oxley deserves a good share of the blame. Yes, there were certainly excesses during the dotcom/Internet/telecom bubble, and no one was more upset than me about the fraud perpetrated at Worldcom and Enron. But accounting fraud was already illegal, and some of the perpetrators did go to jail because of the crimes they committed. The post-bubble Sarbanes-Oxley regulations punish every single public company even today because of the sins of a few more than two decades ago. It’s a fact of life that if you regulate something, you get less of it. The advantage shifts to larger companies, which are better able to afford to comply with the regulations. That’s exactly what has happened in the nearly twenty years since Sarbanes-Oxley became law.

The regulatory load kept increasing during my time at Westell. As a result of the 2008 financial crash, the U.S. government passed the Dodd-Frank Wall Street Reform and Consumer Protection Act. Even though Westell was not a bank, was not on Wall Street, and didn’t have any consumers as customers, there was a provision added to the bill that dealt with tracing various minerals, such as tantalum, tin, and gold, to ensure that no manufactured products were using “conflict minerals” that came from mines controlled by warlords in the Democratic Republic of Congo. This regulation applied only to companies whose stock was regulated by the SEC. It was extremely burdensome and difficult to comply with, and added more overhead to Westell’s cost of doing business. It didn’t apply to most of Westell’s competitors, because they were not public companies.

It’s not surprising to me that Westell decided to stop complying with the SEC’s regulations for public companies. The only surprise is that it took so long.