Warning: this is an entirely political book, and hence my review of it also is political. Since I define politics as “the substitution of beliefs and emotion for facts and reason”, it is almost certain that your views will vary from mine.

A couple of events caused me to buy the Kindle version of COVID-19: The Great Reset, by by Klaus Schwab and Thierry Malleret. The first was when Joe Biden changed his campaign slogan from the “unabashedly lame” (according to Vox) “No Malarkey” to “Build Back Better”, which I then saw other politicians around the world using, including Boris Johnson in the U.K., Justin Trudeau in Canada, Jacinda Adern in New Zealand, etc. Was this merely another example of Biden plagiarizing a British politician, or was something else going on? I also started hearing about some sort of post-COVID-19 “great reset”. The final impetus was when a young reporter at the New York Times wrote an article entitled The baseless ‘Great Reset’ conspiracy theory rises again, which denounces “false rumors about the tight-knit group of elites manipulating the global economy”. Well, there actually is a book with the title cited above, written by Klaus Schwab, the founder of the World Economic Forum, so I decided to read it to see what this grand plan for manipulating the economy might be.

The World Economic Forum, and educational institutions such as Harvard’s Kennedy School of Government, exist because they fulfill a need. If you are an actual government leader, or aspire to be one, you are faced with a challenge: what do you actually do once you gain power? Business schools such as Harvard’s, which I attended, exist for much the same reason: to fill the idea vacuum. I have no reason to believe that Klaus Schwab is the puppetmaster of the global elite, dictating the thoughts and actions of the world’s political leaders. I rather believe that he is a highly influential thought leader, who has had tremendous success instilling his views into the minds of politicians who are searching for answers. Inviting politicians every January to hobnob with their peers, plus other rich and powerful leaders from industry and media, in a highly exclusive ski resort in the Swiss Alps, turns out to be a great way to get one’s views across. At least it has been so in the past; I suspect it will fade in the future, replaced by the hive mind of the Internet 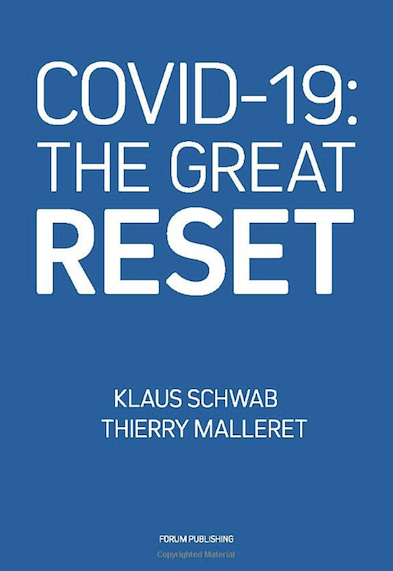 It takes some reading between the lines to figure out exactly what Schwab is prescribing as the cure for the world’s ills, because COVID-19: The Great Reset is written in the language of diplomacy. I’ve been fortunate to be exposed to a few people in my life who are excellent diplomats, and I’d put Schwab in that class. Diplomats can get along with everyone, and are highly skilled at speaking in pleasantries and avoiding conflict. Yet they always have an agenda that they are pushing beneath the surface. It’s not until the conclusion of COVID-19: The Great Reset that Schwab more-or-less explicitly states what that agenda is. I would summarize it as: stakeholder capitalism, the Green New Deal to fight climate change, and the WEF’s 2030 Sustainable Development Goals. It shouldn’t be a surprise that Schwab claims that the COVID-19 pandemic has increased the need for the world to adopt these agendas that he has been pushing for years, with varying degrees of success.

I am not a huge fan of these agendas. Being an engineer, I prefer the most direct, simplest solution to problems. My take on stakeholder capitalism is that charities should concentrate on charity, businesses should concentrate on business, and if people don’t like something that business is doing (such as emitting carbon dioxide), they should have their elected representatives pass a law or a tax to eliminate or reduce the problem, rather than relying upon woke business leaders to pay attention to activists and do the right thing at the possible risk of creating a competitive disadvantage for their companies.

When Governor Gavin Newsome blamed California’s wildfires on global warming, he was correct in that there likely is a linkage between the two phenomena, but incorrect if he thinks that the best way to prevent forest fires in California in the future is to lower the worldwide global temperature by one degree Celsius. The engineer’s solution would be to repair the aging electrical transmission infrastructure, clear brush, construct fire breaks, and thin the forests to reduce available fuel. As for Schwab’s 2030 Sustainable Development Goals, which state that “you will own nothing, and you will be happy” while “whatever you want you’ll rent and it will be delivered by drone” (I explained years ago why I am a drone skeptic), just watch this short video for a quick overview. If my solutions seem far too practical and unenlightened, I cannot help it: I am what I am.

Schwab makes major errors in COVID-19: The Great Reset. He keeps trying to draw a linkage between the pandemic and climate change. Whereas I can see a linkage between climate change and California’s forest fires, does anyone really think the pandemic would not have happened if the global temperature were one degree cooler? Pandemics are inevitable, as history teaches us. Fighting climate change is not going to prevent pandemics. Why not do a better job of preparing for the next pandemic, by fixing the early warning systems, stockpiling protective gear, doing a better job of shutting down international travel and mass transit systems, and having more targeted quarantine plans rather than mass lockdowns? I know, I think too much like an engineer.

Speaking of early warning systems: that’s one of the functions of the United Nations’ World Health Organization. Here’s a Reuters article from early February in which the WHO’s head, Tedros Adhanom Ghebreyesus, states that, after consulting with China, ‘there was no need for measures that “unnecessarily interfere with international travel and trade” in trying to halt the spread of a coronavirus that has killed 361 people in China.’ Meanwhile Taiwan, which is not allowed to be a WHO member because the U.N. caves to the objections of China, had already detected that the coronavirus had spread from China and was taking action to prevent further spread (full disclosure: I have been to Taiwan several times, and I really like the country and the people). What does Schwab say about this glaring failure? “An albeit far from perfect WHO is infinitely preferable to a non-existent one.” Okay, but how about an alternate WHO that fully represents and protects the interests of the American people, given that we cannot rely upon the U.N.’s WHO? Maybe we should get together with the Taiwanese to monitor what the Chinese Communist Party is really doing. I know, I’m being too practical again.

This highlights another of Schwab’s major errors: he has tremendous faith in international quasi-governmental institutions whose leaders are not elected by the people whose lives they impact, whether that be the United Nations or the European Union or the members of the World Economic Forum. This is what attracts the main criticism of Schwab and others like him: they are arguing for everyday citizens to cede greater power to unelected global elites. Without elections, it is hard to oust these leaders and reform their institutions when they fail. Schwab does acknowledge that there is a “populist” movement afoot, which is attempting to recapture some of the power ceded to these institutions. These institutions are now facing their own existential challenges, especially the European Union, which is shrinking, not growing, due to Brexit and economic failures.

The final major error that Schwab makes is that he himself has a very European view of the world. I don’t think he adequately represents the views of people in places like China, India, and Africa, who may not be as concerned about climate change as he is. It’s clear that he would like the United States to throw away “American exceptionalism” and become more like Europe, for example by fully adopting the welfare state model. This may well happen, but it is already causing much friction in the U.S. I don’t see that friction dying down anytime soon, even with a Biden/Harris administration, not as long as they are still teaching the Declaration of Independence in schools, which claims the inalienable rights of “life, liberty, and the pursuit of happiness”. I don’t think I will be happy to give up all my possessions, and if I were forced to, I wouldn’t call that an example of liberty.

I doubt I will ever be invited to the World Economic Forum’s fabulous Davos summit, but if I am, I plan to spend all of my time on the ski slopes.