tl;dr: Some people dismiss self-driving cars, whereas I say: bring on the robot chauffeurs...

A fully autonomous, self-driving car, capable of performing in all conditions without any assistance whatsoever from the driver, is an exceedingly difficult software and control systems problem to solve. There’s also a major potential liability issue: even if a self-driving car reduces the accident rate by 99% compared to a human driver, that still leaves a non-trivial number of product liability lawsuits that can potentially be filed against a car manufacturer such as Tesla. Yet the payoff, measured by reductions in the numbers of accidents and deaths, is potentially huge. There were over 42,000 vehicle fatalities and 4.8 million injuries in the United States last year, according to estimates from the National Safety Council, an 8% increase over 2019 even though miles driven dropped by 13% due to the COVID-19 pandemic.

Distracted driving, in my opinion, is a growing problem: it’s almost as though some drivers already think they are in a self-driving car, and hence pay more attention to their smartphone than the road. My 2014 Jeep has now been rear-ended while stopped at a stoplight three times, fortunately at fairly low speeds, each time by a distracted driver. The first time was the most serious, as the distracted driver hit the car stopped behind my Jeep at high speed, which pushed it into my Jeep at a much lower speed. That incident led to my battle in court with Sentry Insurance, in which I learned some important lessons about how insurance companies behave: they don’t always tell the truth.

To try to make it more obvious to other drivers when my Jeep is stopped, I recently upgraded the brake lights. One of the fun aspects of owning a Jeep Wrangler is that there is a wealth of aftermarket parts available for customization and personalization. I replaced the two main brake lights with brighter LED brake lights, and added a ring of LEDs inside the spare tire that also light up when the brake pedal is pressed. It’s definitely brighter, but if an approaching driver is staring at their smartphone instead of the road ahead, it still might not make a difference. 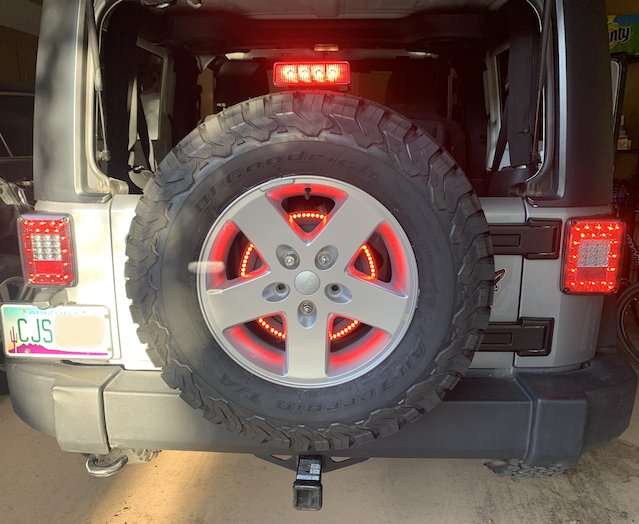 Please don't run into my Jeep

Which drivers do I fear the most? In my experience, Audi drivers nudge out BMW drivers for being the most aggressive and the least deferential to others, be they other drivers, bicyclists, and/or pedestrians. Audi drivers are important, they are in a hurry, and you best step aside and let them get where they are going as quickly as possible. When I’m at an intersection and an Audi approaches, I let the Audi zoom away before I think of entering the intersection, even if I arrived well before the Audi did. I almost never have to wave them through, as they are not at all waiting for me to give them permission to proceed.

The most clueless, distracted drivers, in my experience, are those at the wheel of a Honda Odyssey minivan. The Honda Odyssey is a large, bulbous minivan, which appears to have poor visibility for the driver. Nevertheless, the primary reason for the driver’s inattention to surroundings is almost certainly the passel of kids in the back, who may be fighting, crying, or screaming at the driver. Odyssey drivers tend not to even notice me when I am bicycling, so I give them a very wide berth. I’ll predict it here: if I die in the next ten years, there’s a good chance it will be due to being run over by a Honda Odyssey.

Living in the Valley of the Sun in Arizona, I encounter self-driving cars on a nearly daily basis, usually with one or two humans in them. Because of the sunny weather here, this is a popular location for companies developing self-driving cars to train and test the software that controls the car. They stand out because of the large amount of electronic equipment and cameras on the roof, and also due to branding. Sometimes a human appears to be driving, in which case the car’s software may be in learning mode. Sometimes the human appears to be along for the ride as the car drives itself. In either mode, the self-driving car is proceeding in a safe, cautious manner at a legal rate of speed. It’s quite like observing a car labeled “STUDENT DRIVER” that is being used by an instructor to train a new human driver: typically the instructor is not letting the student driver speed or make sudden maneuvers.

As a pedestrian and bicyclist and driver, I’ve developed a comfort level with having self-driving cars on the road. I know full well that there is always the possibility of a software problem that can cause an accident. Yet because the self-driving cars are proceeding in a safer manner than almost all human drivers, I’ve gotten to the point where I prefer them to human-driven cars, especially Audis and Honda Odyssey minivans.

Even if fully autonomous, self-driving cars take another decade or two to arrive, I am hopeful that spin-off safety systems can help reduce accident rates. If every new vehicle was equipped with a system that automatically applied the brakes, if a driver fails to do so while approaching a stopped vehicle, I might not have to find even brighter brake lights for my Jeep.