tl;dr: A concise overview of the fascinating life of the U.S.’s most renowned architect...

Frank Lloyd Wright led a long and event-filled life during a period of rapid change in the U.S. and the world. His professional career spanned two world wars; the progression of transportation from horse and buggy to the automobile to commercial air travel; and the redrawing of city skylines by the skyscraper. In addition to being the U.S.’s most renowned architect, FLW’s personal life had both triumphs and tragedies, as well as scandals and run-ins with the law. He worked into his nineties, and entire books have been written about individual phases of his life.

Given that I didn’t want to read multiple separate biographies about different periods of FLW’s life, nor a long, dense single volume, I was glad to read Ada Louise Huxtable’s approachable biography, Frank Lloyd Wright: A Life. Huxtable’s book was a fairly easy read, and sketched out the major events in FLW’s life while also conveying the drama. I had never read a book about FLW before, and can now recommend Huxtable’s book as a starting point for anyone who wants to know more about FLW than what appears on his Wikipedia page. 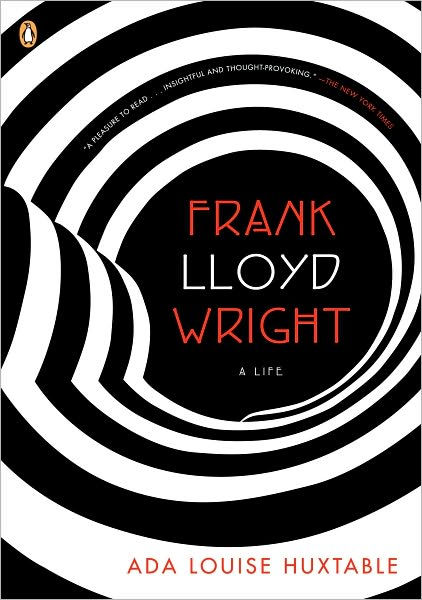 Ada Louise Huxtable was an architecture critic. Her book gave me a greater appreciation for the impact of architecture on people’s lives, and the degree to which architects function as artists. Architecture is, necessarily, one of the most practical of arts. Almost all buildings are constructed to be inhabited by people, and they must obey certain laws of physics, geology, and climate in order to do so. This is where civil engineers and builders assist the architect, by translating visions and drawings into something that can actually be constructed and which will hopefully stand the test of time. As an engineer myself, I perhaps tend to overestimate the importance of the engineer at the expense of the architect.

Yet great buildings also inspire, create a sense of home and community, and can even build a brand and an image, for a person or a company. On multiple occasions in his career, in buildings such as Fallingwater, the Imperial Hotel in Tokyo, and the Guggenheim Museum in New York City, Wright pushed the boundaries of what was technically possible to construct, in order to achieve his vision. FLW was, of course, much more than a technical innovator. The aesthetics, the flow and usage of space, and the setting of the building within its environment are even more important, in his work, than the technical construction challenges his buildings overcame. Huxtable’s book grew my appreciation for these aspects of the architect’s craft.

Now that I’ve moved to Arizona from the Chicagoland area, there is considerable geographic overlap between FLW’s life and my own. FLW was an early snowbird, coming to Arizona in the winter months as far back as the 1920s. I’ve toured the well-preserved Taliesin West compound on the outskirts of Scottsdale, and been very impressed by what FLW and his loyal followers designed and constructed, which started by scraping away at the desert and piling up rocks. In listening to the tour guide speak about FLW’s third wife and his other followers, some of whom still reside on the grounds, it was clear that FLW was an incredibly charismatic leader. Having now read Huxtable’s book, I have a greater appreciation for what FLW accomplished and the many challenges he faced.