Don’t sell past the close

tl;dr: Read the audience to know when to shut up and take the money...

Another sales maxim that I learned decades ago from some pros that I accompanied on sales calls is: “Don’t sell past the close”. Technical folks like myself sometimes get so caught up with our pitches that we forget to obey this rule.

There are multiple aspects of pitching a complex deal, and each has its own “close”: the point at which the customer agrees to the points being made by the selling team, perhaps after some modifications and negotiation. For example, the customer may accept that the product has all the needed features and performance, and then be ready to discuss price. So there’s a close for product acceptance, and a separate one for pricing. There’s also, of course, an overall close to the entire deal, once everything is put in writing and signed.

“Don’t sell past the close” simply means that, once the customer has agreed to the points being made, the person or team making the pitch should immediately move onto the next aspect of the deal. Selling past the close runs the risk of upsetting the customer, and possibly causing them to change their mind, if additional information is presented that runs counter to their desires. 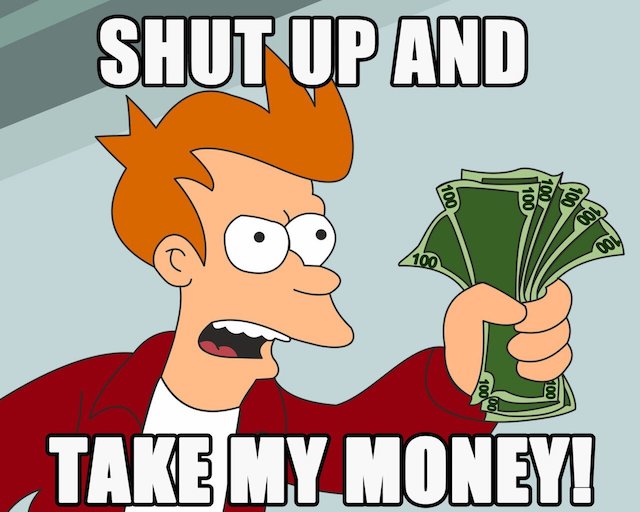 We’ve probably all been on the customer’s side of the table when a salesperson sells past the close. This is one impetus for the “Shut up and take my money!” meme. Once we’ve decided to buy something, we want to make the purchase as quickly as possible and move forward. Any additional time spent on the sales pitch is just wasted, and a potential irritant.

I once worked with a brilliant technologist who did fabulous pitches, but was well-known among the sales force for selling past the close. Possessing a world class analytical mind, he would prepare long, dense slide decks and business cases which contained every major and minor point that he could marshal in favor of the company’s proposal. He could more than fill up any allotted time that he was given on the agenda for making his case. In the pre-call meeting, he was often urged to cut down on the number of slides that he presented, and to move slides to the back of the deck in the appendix section.

He passionately believed in the company’s products, which he had helped create, and wanted everyone to understand everything about them. He wanted to go through all the material he had prepared, educate everyone, and get everyone to agree with every single point he had prepared. In most cases he would run out of time, and the lead salesperson would have to take control of the meeting to get it back on schedule.

In some cases, however, he would find an especially agreeable customer, who would state their acceptance of the main points being made. At this point my friend the brilliant technologist had closed his portion of the deal: it was time to move onto other topics, such as price, delivery, service, and support. Yet his default behavior was to continue his pitch by trying to present the rest of the slides he had prepared. The lead salesperson would then have to regain control of the meeting and move onto the other issues that the customer still wanted to discuss.

The person selling past the close doesn’t realize they are selling past the close; if they did, they wouldn’t do it. This is why it is a good idea, if possible, to have a dedicated observer among the sales team in the meeting, who has no role in the meeting other than to watch what others are saying and doing, taking notes along the way, and redirecting the meeting as needed. A good salesperson, who has heard the pitch many times before, will also be primarily focused on watching the reaction among the customer’s team, and will speak up as necessary to move onto the next topic once the customer wishes to do so.

In my Leading with the ask post, I described the shortest sales call I ever made. The customer accepted my ask, and the meeting immediately proceeded to a celebration of the deal. I didn’t sell past the close, by attempting to delineate all the points I had been prepared to make.

There’s another particularly annoying type of selling past the close: targeted Internet advertisements that continue to push ads to you for a product that you’re already purchased and won’t need to buy again for a long time. That is a post for another day...