As I mentioned in my review of When Money Dies, the book I recommend reading before tackling Dying of Money, I have vivid memories of the last great inflation in the United States, which spanned from the late 1960s to the early 1980s. While I was getting upset by candy bars going up in price or shrinking in size, attorney Ronald H. Marcks, writing under the pen name of Jens O. Parsson for reasons of anonymity, was researching and writing Dying of Money, which takes as its primary topic that still-in-process inflation. The book was published in 1974, so it ends before the inflation did, with some conjectures about how things might turn out. The name Paul Volcker does not appear in the book, but Parsson does speak to the magnitude of the effort that it would take to conquer the inflation.

For those who consider themselves monetarists, or for those seeking a level-headed explanation of the 1970s inflation, Dying of Money is an absolute must read. When Money Dies is mostly a historical account of the German inflation during the Weimar Republic of the 1920s; Dying of Money gets into more economic theory about why inflations happen. Parsson uses that theory to explain what was happening during the American inflation of the late 1960s and 1970s, while also touching upon the Weimar inflation. He is very specific about the policy mistakes that were made, and explains why actions such as President Nixon’s wage and price controls were doomed to fail. For a monetarist like Parsson, the only way for an inflation to end is to slow the creation of new money and let prices rise to their new equilibrium level, to match the amount of goods in the economy. 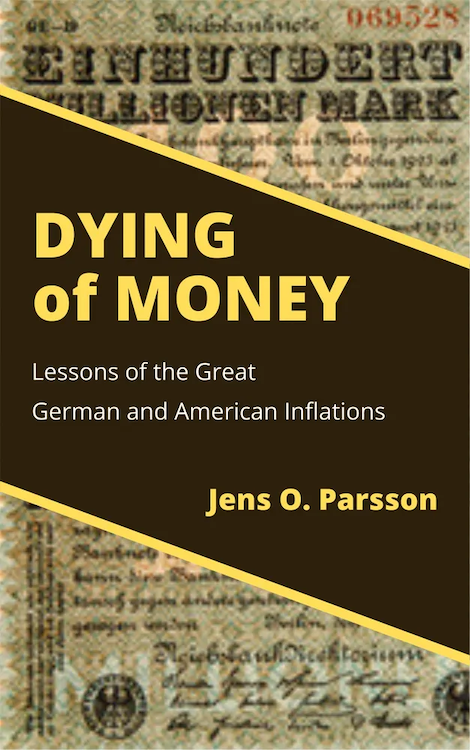 Parsson has a great command of the English language, and a wonderful knack for turning a phrase. Dying of Money is filled with quotable sentences that have parallels to today’s economy, such as: “A sharply rising stock market proves to be an unfailing indicator of monetary inflation happening now, price inflation coming later, and a cheap boom probably occurring in the meantime.” If that quote intrigues you, and sounds like what might be happening today, there are hundreds of equally thought-provoking ones sprinkled liberally throughout the book.

Parsson has read the extensive writings of economist John Maynard Keynes, and explains where economists who call themselves Keynesians have gone wrong by misapplying Keynes’s teachings. Dying of Money also contains a set of major economic policy changes that Parsson would make if he were given political control of the American economy. This is probably why Ronald H. Marcks decided to publish under a pen name, because the policy recommendations are outside the bounds of normal debate between so-called liberals and conservatives.

To cite just two examples: Parsson argues for what is today called “Universal Basic Income”, but which he calls the “National Dividend”, to provide every citizen with sustenance and a fair share of the generated wealth; but he also argues for abolishing the minimum wage, to allow everyone to be paid strictly in accordance with the value they add on the job, thereby relieving private industry of paying for basic sustenance, which is supposed to be provided by the National Dividend. While Parsson has the average citizen’s welfare foremost in his proposals, his proposals are collectively such a major change from our ossified political system that, lacking a crisis which would open people’s minds to major changes, they are purely hypothetical.

As the book’s website explains, Dying of Money achieved only a small volume of sales when it was originally published. It has recently been rediscovered by some financial industry luminaries, which hopefully pleased Ronald H. Marcks, who passed away a few months ago. I couldn’t find any reasonably priced used copies available for sale, or an ebook version for sale, so I located a PDF version of the book somewhere on the Internet. The PDF had some problems, especially towards the end of the book: there were occasionally some missing or jumbled words. I wish some publisher would release a definitive version of the book for sale, even if it's just an ebook. I would willingly pay for it, and heartily recommend it to others who want to know just what went wrong in the 1970s and what may be going wrong now.