I recently took my first COVID-19 pandemic airplane flight: a roundtrip to the Midwest to visit my parents. This was my first time seeing them in person since shortly before the pandemic, when they visited me in Arizona while the COVID-19 virus was starting to make its way around the world. Seeing them was a reward for all that we’ve endured, and a sign of hope that better days hopefully are upon us.

The visit was great, but the flights were a disheartening, dystopian ordeal. I’m convinced that when you take a couple hundred strangers, mask them, seat them in close confines, discourage them from socializing and moving, and provide them the lowest possible level of comfort and service, psychological abnormalities and poor behavior arise.

I’m used to the decades-long decline in airline service levels; I’ve witnessed this my entire life, and it was happening long before COVID-19. Long gone are the days when I was a frequent flyer on Alaska Airlines, which would often upgrade me for free to first class where I would be served a gourmet meal on plates, silverware, and cloth napkins, with whatever beverages I desired. The nuts were a medley with plenty of cashews and they were heated before being served in a glass goblet; also warmed was the cognac they served, so as to better release the aroma. Then there are the international flights I’ve taken on non-U.S. carriers: always fly on any other country’s carriers if you want the best service when traveling to or from the United States. 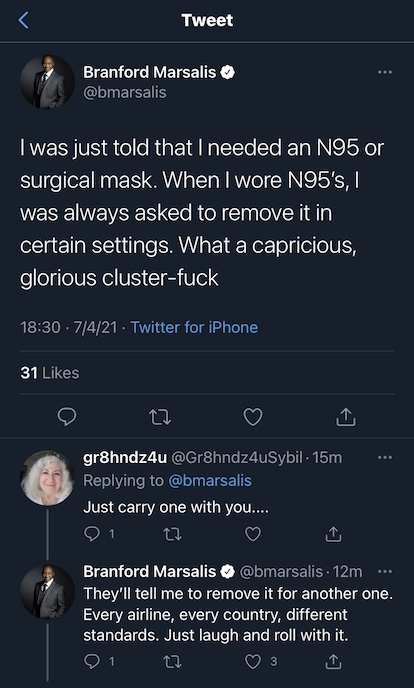 These flights were on Southwest. I not only don’t normally mind Southwest, it was my frequent flyer program of choice. I do miss the “party seats” they used to have on their planes: rows of seats that faced the back of the plane, and created a social atmosphere where you couldn’t help but get to know the other people in your seating group of six, with three people facing three other people. Southwest was efficient and their employees were encouraged to make the flights fun and keep people happy. Jokes and songs were quite common. Free drink coupons would show up in the mail faster than I could use them; I used to pass them out, to make someone else happy. But now, with the COVID-19-era restrictions in place, all the fun is gone. What has replaced it is unnerving, anxiety-inducing, and a bit scary.

The masks are a problem. An airplane flight is an out-of-the-ordinary experience to begin with, and induces anxieties and fear of flying in some passengers (not me, I normally enjoy flying). I was flying by myself, so I was crammed onto a full flight with around two hundred people I did not know, including the person next to me, who was touching arms and shoulders with me as we shared an armrest. Because everyone was wearing a mask, no one could read anyone else’s facial expressions. Some people had hats on, and dark glasses, which made them even more anonymous. Although my rational mind told me that everyone had made it through airport security, my lizard brain was on high alert, wondering if one of the hundreds of masked people might be a hijacker. If you walked into a bank, and everyone was holding a toy gun and wearing makeup like the Joker in The Dark Knight movie, you probably would feel a similar sense of unease.

A certain amount of common courtesy among the passengers and crew is required for a pleasant flight. I tried to be my normal courteous self, but without the ability to see anyone else’s reactions, it was hard to know how my words and actions were being received. No one slugged me, or appeared to yell at me (the masks also muffle voices), so I presume my behavior was appropriate. But I can definitely see how someone’s actions might be misread or misinterpreted by another.

The crew kept their interactions with the passengers to the bare minimum, which is understandable, given that the pandemic still isn’t over. They served a snack (no choices other than to skip it) and a beverage service with a mere four choices, for a three hour flight (the slightly longer return flight had a water service at the end). For the beverage service the passengers were encouraged to make their choice by holding up the number of fingers that corresponded to the item they wanted on the beverage card in the seatback pockets. Needless to say there was no alcohol served. It was about the level of service you’d get on a prison plane. All that was missing was tie wraps to secure the passengers’ arms to the arm rests. 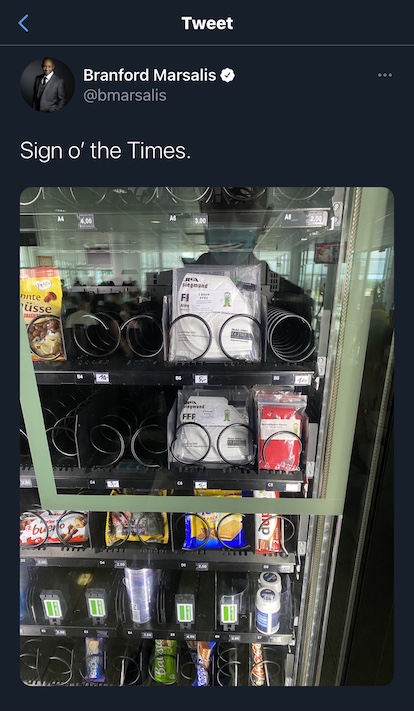 Masks for sale in an airport vending machines, as captured by Branford Marsalis

So everyone is masked like a criminal, and is treated like a prisoner. Is it any wonder that CBS News recently reported “violent airline incidents on the rise” and that airlines are going to keep their minimal, alcohol-free beverage services? We’re fallen into a Catch-22: the airlines can’t treat people civilly until they act civilly, yet they won’t act civilly until they are treated civilly.

Someday, hopefully, the mask mandate on commercial U.S. airplane flights will be lifted. When it is, I predict that a certain amount of civility will return. I fully realize that there are passionate people on both sides of the mask issue. My own scientific study says that the masks we in the general public wear do not offer much of a barrier to very small airborne particles such as viruses. When I’m wearing my mask and someone farts, I smell it. Same with smoke, vape clouds, and perfume. The masks can stop large droplets from sneezes, so they offer a bit of protection. But they can also encourage people to get closer to each other than they otherwise would. I’m under absolutely no illusions that my mask would have prevented me from breathing in coronavirus if the stranger sitting next to me on my three hour flight was infected. I’m sure airborne particles passed between our lungs.

As it is with other COVID-19 restrictions such as lockdowns, remote schooling, and social distancing, I think the public health officials pushing mask mandates fail to take into account the psychological damage they inflict and the resulting impact to mental health. Flying is one way to see this effect firsthand.