Returning to the office

tl;dr: One permanent change wrought by the pandemic is likely to be the end of the daily office commute for some workers, myself included...

The company I work for, meltmedia, is about to resume a certain level of work activities in the office, the first time since the COVID-19 pandemic hit in March 2020 that teams will be together in-person. The location of work, and where employees are required or expected to be and when, will no doubt be one of the major permanent changes from the pandemic.

Going into the pandemic, meltmedia was already ideally positioned to transition to 100% of the employees working remotely from home or wherever. As a “digital execution agency”, we have no physical products; everything we deliver is ultimately software and digital assets that run in the cloud, over the Internet. Everyone had a laptop that they carried home each night; all the information we needed was accessible in the cloud; all the deliverables we produced were deployed in the cloud. All the conference rooms in the office, except for the very smallest, were already wired with large screen displays, microphones, speakers, and cameras for seamless video conferencing among in-person and remote attendees. It was very common for a fraction of employees to be working remotely each day, either because they felt under the weather, or they had to stay home to receive a package, or they had to run an errand. We also had a handful of permanently remote employees, who had previously worked in Arizona but who had relocated to other cities.

When the pandemic hit, we all just went home one day in March 2020 and stayed working from home. All of our meetings took place over videoconferencing with all participants, instead of a fraction, being remote. We increased our reliance on the Slack messaging service. Other than those changes, and the psychological and cultural changes of no longer seeing coworkers in-person on a daily basis, the work output continued much as it had before. 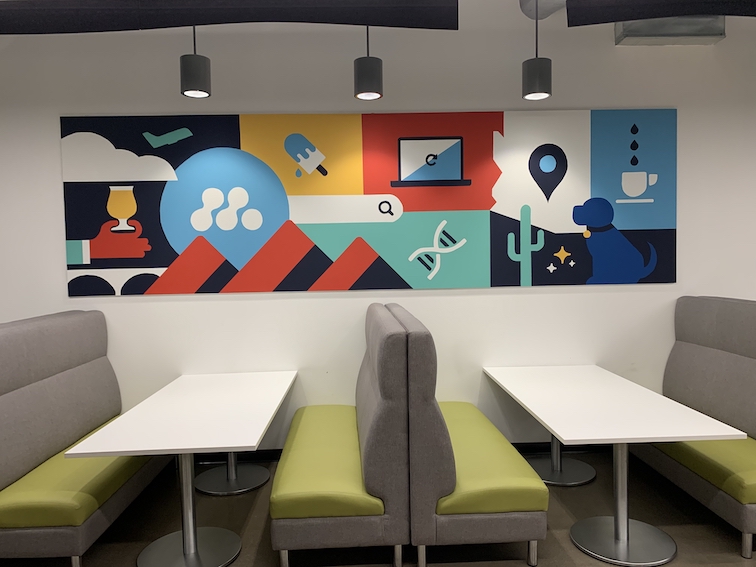 A mural with company imagery in the meltmedia office

The biggest impact on our worklife, I think, was when people would leave or join the company. In the job market as a whole, there was more turnover than I was expecting during a pandemic when it was basically impossible to meet anyone in person. Yet some people left, and we hired some new people. For a company with an award-winning office space and an award-winning workplace and company culture, this felt a bit strange to me. We were hiring people without having them fully experience what the company actually was like. The onboarding experience, I think, suffered. But all in all, the transition to 100% remote for more than a year went pretty smoothly.

Many industries, companies and workplaces, especially those dealing with physical products, could not transition to remote work. This was, I think, one of the most unfair aspects of the lockdowns implemented by governments. There were plenty of workers, labeled “essential workers”, who had to keep reporting to their in-person jobs every single day during the pandemic. I lived with and know some of these essential workers. They were asked to continue to go out in the world and make, deliver, and provide the products and services that all of us remote workers needed to survive. Many of them never missed a day of work while I was stuck at home. It was as though the government was saying that the real essential workers were the folks staying home to be protected from the virus, whereas the other workers were the ones who could be sacrificed if they were to fall victim to the virus.

For other companies and industries that weren’t as well positioned as a company like meltmedia to instantly transition to 100% remote, the work output degraded significantly. Remote schooling was the failure that affected the most people, as millions of students had to endure a poor substitute for the education that they had been receiving. I’m a big believer in online education and there are plenty of good online courses, but the traditional on-campus schools and universities simply weren’t set up to instantly transition to 100% remote. The students suffered tremendously, and as a society we’ll be dealing with the fallout of this failure for a long time to come.

I realize that people were truly scared about the virus. I also realize that I was in a privileged position of being in a small industry and a company that could easily transition to 100% remote (although I had also, years ago, made the decision to move into this industry). To me, it felt a little as though a lot of people had decided that, in order to avoid the virus, they could declare themselves to be knowledge workers and do their jobs from home. In some cases this worked out, but in many industries, especially education and entertainment, it did not.

I got bored with the monotony of working from home, never seeing my coworkers, and only seeing a few other people in-person over the course of the day. I eagerly started going back to the office when it was first re-opened in the fall of 2020, during what turned out to be the lull in between Arizona’s two big COVID-19 surges. When the second surge diminished and the vaccines started rolling out this spring, we attempted a second small re-opening, and I returned to the office a few days a week. I like the variety of being able to work from different places. In college, I would mix it up, studying from my dorm room or home, or one of the many libraries on campus, or from classrooms which were unlocked and empty at night. If I really wanted to focus, I’d hide in the stacks of certain libraries, where I was just about guaranteed not to see another human being for hours at a time.

With teams at my company now being asked to resume coming to the office at least one or two days a week, I wonder how this hybrid work arrangement will go. Hybrid seems to be what many other technology companies are doing, with minor variations. Some people will doubtless still be worried about the virus, even with widespread vaccine availability. Some will have trouble returning because of child-caring responsibilities; I am past that stage. There may also be a feeling among some that we are all now “digital nomads”, which is a lifestyle that some in the software industry aspire to: never having to report to a physical office while roaming the world and working from anywhere that has a decent Internet connection. I don’t think we’re there yet as an industry, and there still are advantages to getting together in-person, at least some of the time. We’re about to find out.